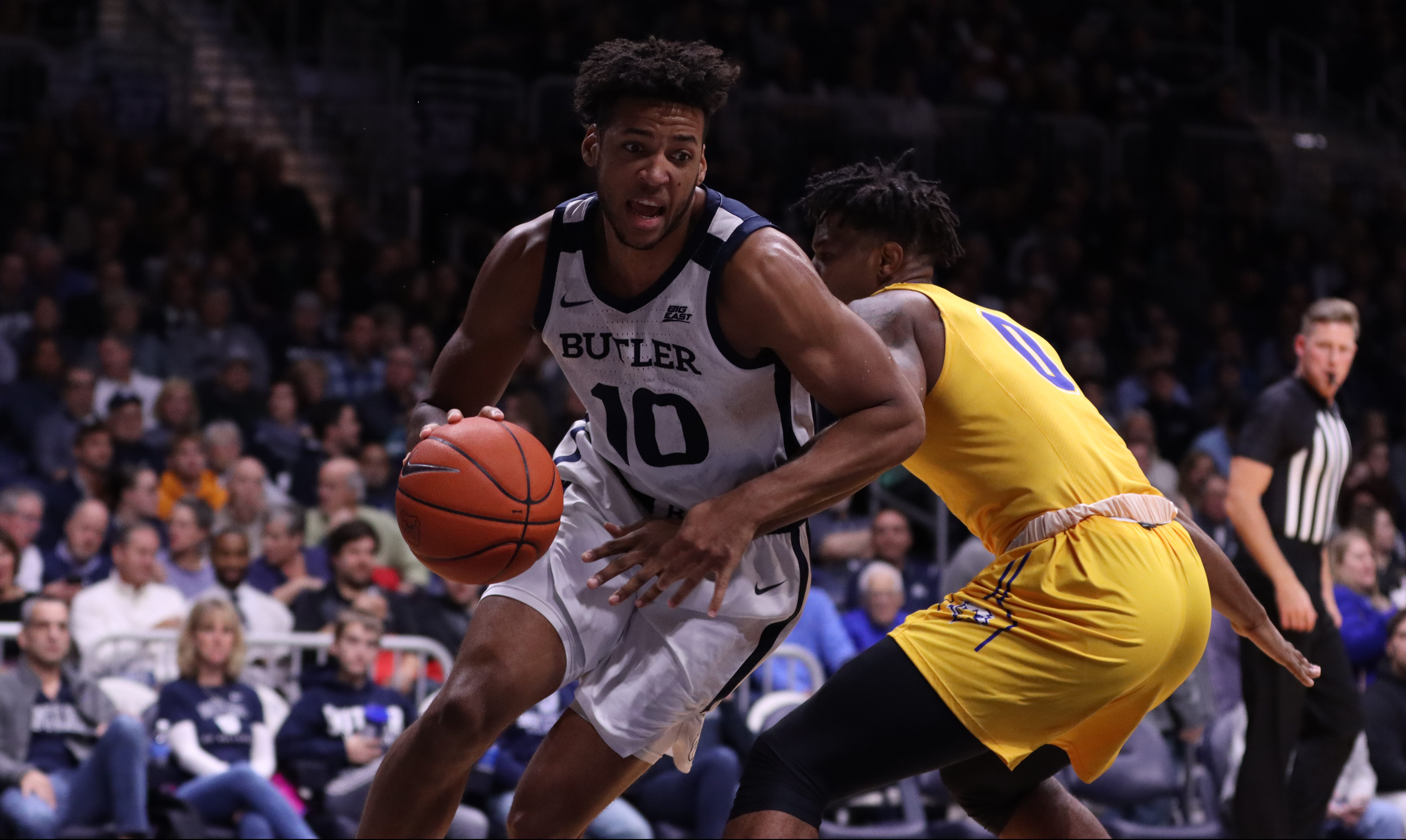 Bryce Nze drives to the basket during a game this season. Nze and the Butler men’s basketball team host No. 18 Seton Hall on Jan. 15. Chandler Hart / Collegian file photo.

The Butler men’s basketball team won’t be able to bask in their 3-0 start to Big East play and the No. 5 ranking they received in the most recent AP Poll because the best team to come to Hinkle so far this season rolls in on Wednesday: the Seton Hall Pirates. Led by national player of the year hopeful Myles Powell, a team picked to finish atop the Big East has rebounded from their slow start — and Powell’s injury — and is now 18th in the AP Top 25 and 13th at KenPom.

The Pirates are the only other remaining undefeated team in the Big East, sitting at 4-0. Here’s what you need to know about maybe the biggest college basketball game of the week and the keys for Butler if they want to come away with a victory over the Big East favorites.

It’s no secret the most explosive player on the Seton Hall roster is Myles Powell, and the Pirates use him as such. He’s third in the country in percentage of teams shots, taking 40.9 percent of the Pirates’ field goal attempts while also being ranked sixth in KenPom’s national player of the year rankings. Apart from missing two games due to a concussion, Powell has scored more than 20 points nine times this season, shooting 41% from the field and just under 34% from beyond the arc.

Powell is quite simply one of the most explosive players in the country. With the ability to go for 35 points on any given night, he can beat you with the 3-pointer if he needs to but can also be physical and get to the free throw line. Butler’s defense will center around him, as it should, and is step one to slowing down this Pirates offense.

With that being said, Quincy McKnight has developed into another scoring threat in the backcourt with Powell. In the two games Powell missed against Maryland and Prairie View, McKnight had 17 and 25 points, respectively, and had eight assists and six rebounds against Maryland. In conference play, he’s turned in two games of 14 points or more and hasn’t dished out less than six assists. Perimeter defense on Powell will be the focal point of slowing down the Pirates, but containing McKnight is also a big part of Butler’s success.

It’ll be easy to get caught up in trying to score enough points if Powell has an incredible game. But whether or not he has a great night, Butler will see success if they hang their hat on the defensive end. On Nov. 14, Seton Hall lost at home to Michigan State despite 37 points on 12-of-27 shooting and six threes from Powell. Only one other Pirate was in double figures and the rest of the team combined for just 14 field goals the entire game.

The same thing happened against Oregon, when Powell dropped 32 points but once again had almost 50 percent of the field goals against the Ducks and only two players reached double digits with 10 points. Good teams have seen success against the Pirates by limiting the supporting cast around Powell. When Powell is making everything under the sun, it can be easy to get caught up in keeping up with him on the other end. But if Butler can continue to control the pace of the game and stay focused on the defensive end by stopping everyone not named Powell, they have a good chance to win this game.

Butler doesn’t force an incredible amount of turnovers — due, in part, to their slow tempo — but the Pirates have an issue with turning the ball over and it’s especially true in their four losses this season. In three of those four games, the Pirates had more turnovers than assists, including 20 turnovers to 12 assists in their loss to Iowa State. The Bulldogs don’t pride themselves on forcing turnovers, per se, rather than making teams work for every bucket, but the Pirates are prone to mistakes, especially away from the Prudential Center.

Seton Hall’s most recent starting lineup featured five players with the following heights: 6’2, 6’4, 6’6, 6’6 and 7’2. Apart from the massive Romaro Gill who stands over seven feet tall, Butler has an advantage on the interior in both the rebounding category and in terms of production on the offensive end. The Bulldogs are top 30 in the country in rebounding margin, averaging seven more rebounds per game than their opponents, while the Pirates are pulling down just over one more rebound per game than their opponents. Six players on Butler’s roster average more than 3.5 rebounds per game and Bryce Nze and Bryce Golden combine for 18.1 points and 11 rebounds per contest.

Part of controlling this game will be controlling the interior by limiting second chance points, winning the rebounding battle and using Nze and Golden’s abilities on both ends in an effective way. Gill is having his best three-game stretch of the season, averaging 12.7 points and six boards. The Bulldogs have an advantage inside the paint and winning the interior will contribute to Butler’s effectiveness on both ends of the floor.