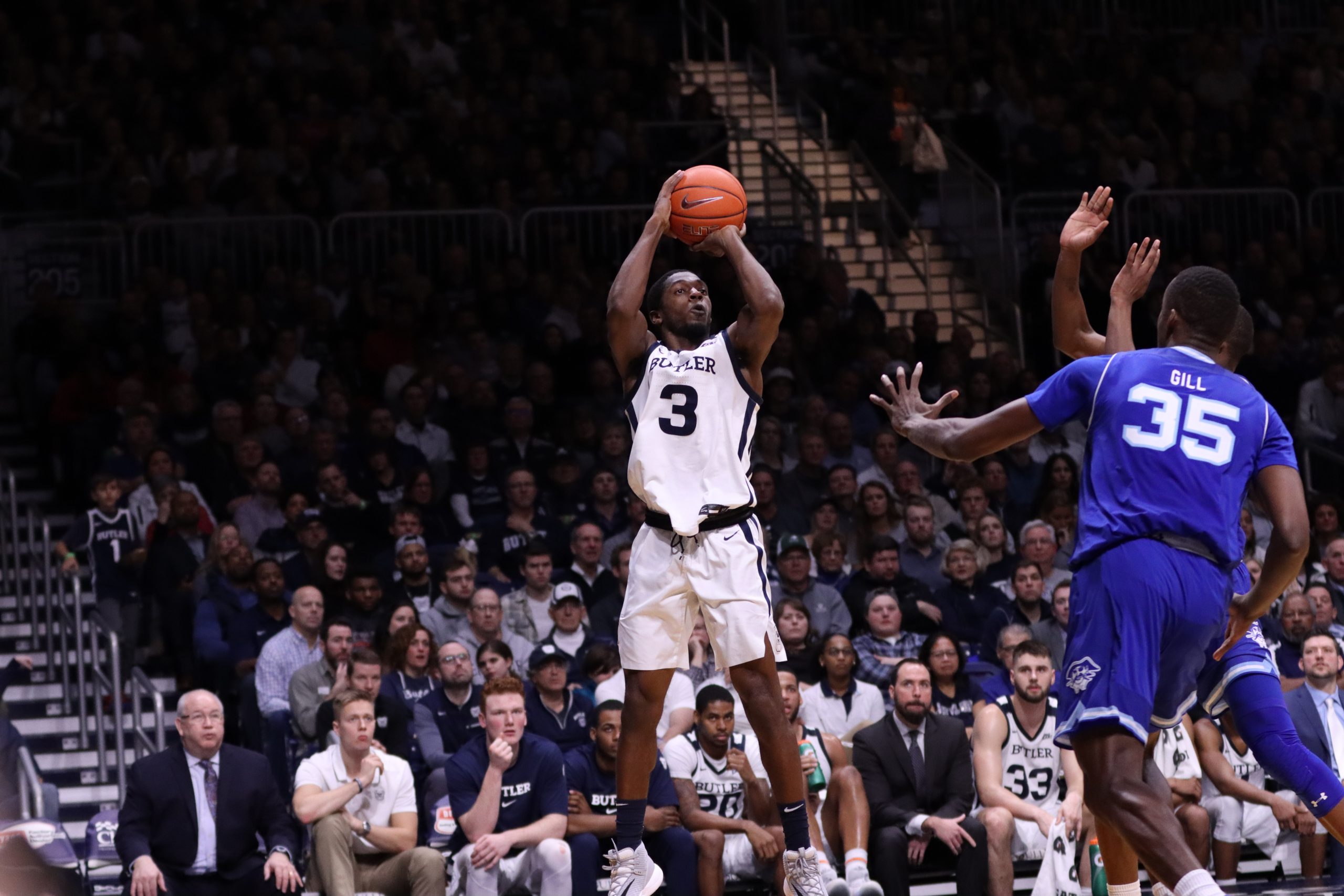 Kamar Baldwin takes a shot against Seton Hall on Jan. 15. Baldwin finished with 19 points in the loss. Photo by Chandler Hart.

Due to a pair of completely different halves and some foul trouble, the Butler men’s basketball team fell to No. 18 Seton Hall inside Hinkle Fieldhouse by a score of 78-70. Butler moves to 3-1 in conference play and 15-2 overall while the Pirates take a commanding lead in the Big East.

It was a tale of two halves inside Indiana’s basketball cathedral. After winning the first half 40-30, the Bulldogs were outscored by Seton Hall 48-30 in the second half. Myles Powell and Romaro Gill combined for 34 in the second frame and led the second half charge.

Butler was plagued by Aaron Thompson’s foul trouble. The junior fouled out with just under seven minutes to play and only played three second half minutes. Kamar Baldwin and Jordan Tucker led the Bulldogs with 19 points and 14 points, respectively. Tucker recorded a double-double also pulling down 10 rebounds in the loss. Let’s go beyond the box score of Butler’s first Big East loss of the season, and the first loss since falling to Baylor on Dec. 10.

Stressing over the number of points Myles Powell is going to get is ultimately a waste of time. Because, quite simply, he was going to get his points regardless of what Butler did against him defensively. The Bulldogs did a decent job on the national player of the year candidate. It took Powell 23 shots to get 29 points and he went the last 11:41 of the first half without having a field goal. With that being said, he still scored the most points Butler has given up to a single player this season because he is that good.

What is much more controllable, is making sure that Seton Hall’s role players don’t have too big of an impact along with the 29 points from Powell. Butler wasn’t able to stop the role players. Quincy McKnight, Romaro Gill and Jared Rhoden also reached double figures, combining for 41 points between the three of them. McKnight had 11 points, 13 assists and seven rebounds while only turning the ball over once. He was phenomenal in the backcourt alongside Powell. Rhoden went 3-of-6 from the floor and knocked down six free throws, finishing with 13 points and eight rebounds. He also knocked down a three off an out-of-bounds play with less than a minute left that put the Pirates in the driver’s seat to close out the game. Gill, more on him in a moment, had 17 points, four rebounds and three blocks.

Oregon and Michigan State both came away with victories against Seton Hall on nights that Powell scored 32 and 37 points. What they were able to do was prevent the Gill’s and McKnight’s of the world from beating them as well. The Bulldogs weren’t nearly as successful in that category tonight.

2. Seton Hall head coach Kevin Willard made the best adjustment of the game in the form of Romaro Gill.

Take a moment to examine Gill’s performance in each half. In the first half, he had two points, one rebound and two fouls. In the second half, he had 15 points, three rebounds and two blocks. He only missed one shot all game. What Kevin Willard did essentially took Bryce Golden and Bryce Nze out of the game. He turned Gill into a very aggressive threat on both ends of the floor.

Early on in the second half, Seton Hall was running sets for Gill, getting him rolling towards the basket. Nze and Golden simply weren’t big enough to jump with the 7-foot, 2-inch Gill. It forced head coach LaVall Jordan to go with Derrik Smits, who had some trouble defending the pick-and-roll, losing Gill on multiple occasions. On the defensive end, Willard said he put Gill into positions where he didn’t have to think about which read to make he just had to be in the spot he was supposed to be in. Gill was much more effective on the defensive end as well.

For Butler, that meant they couldn’t reap the benefits of Golden stretching the floor or Nze’s rebounding and playmaking abilities because neither of them were tall enough to stop Gill in the second half. Smits played 11 minutes in the second half while Nze and Golden played just seven each.

Willard’s halftime adjustment completely took Nze and Golden out of the second half and even though Gill fouled out late in the game, it wasn’t enough time for either Bryce to have a major impact on the end of this game. Fortunately for Butler, there are very few players bigger than Gill in the Big East.

3. It is very clear how important Aaron Thompson is to this team.

Everyone and their mother has talked about how important Thompson is to Butler’s success. Tonight, it was painfully obvious in the second half — in which he only played three minutes — and the 6:28 that the Bulldogs played after he fouled out.

After a 40-point first half, Butler scored just 30 points in the second frame. They shot 30% from the field after shooting 56% percent in the first half, only making nine field goals total in the second 20 minutes. While Baldwin was good in the second half, it was clear that Butler’s offense was missing a cylinder without Thompson on the floor.

Thompson allows Baldwin to play off the ball more on the offensive end and pick his spots, has an ability to control the pace of the game on both ends of the floor and, of course, plays elite defense on some of the best scorers in the country.

There is never a good night to lose Thompson to that extent, but against Seton Hall is one of the worst. Butler has one of the best defensive backcourts in the country in Baldwin and Thompson, and they needed that duo for as many minutes as possible against guards like McKnight and Powell.

As Kevin Willard said in the post-game press conference, Thompson makes this team go, and that was crystal clear tonight and one of the reasons the Bulldogs lost at home to the Pirates.

These two teams are clearly the best the Big East has to offer. The PIrates have been absolutely phenomenal on both ends of the court nearly a third of the way through conference play. They are first in offensive efficiency in the conference and first in defensive efficiency. They are first in 2-point field goal percentage on the offensive end and the defensive end and they have arguably the best player in the conference and a top-five player in the country. Clearly, the preseason poll got Butler wrong — the Bulldogs were picked eighth — but picking Seton Hall to win the Big East was a good call. The Pirates are a force to be reckoned with.