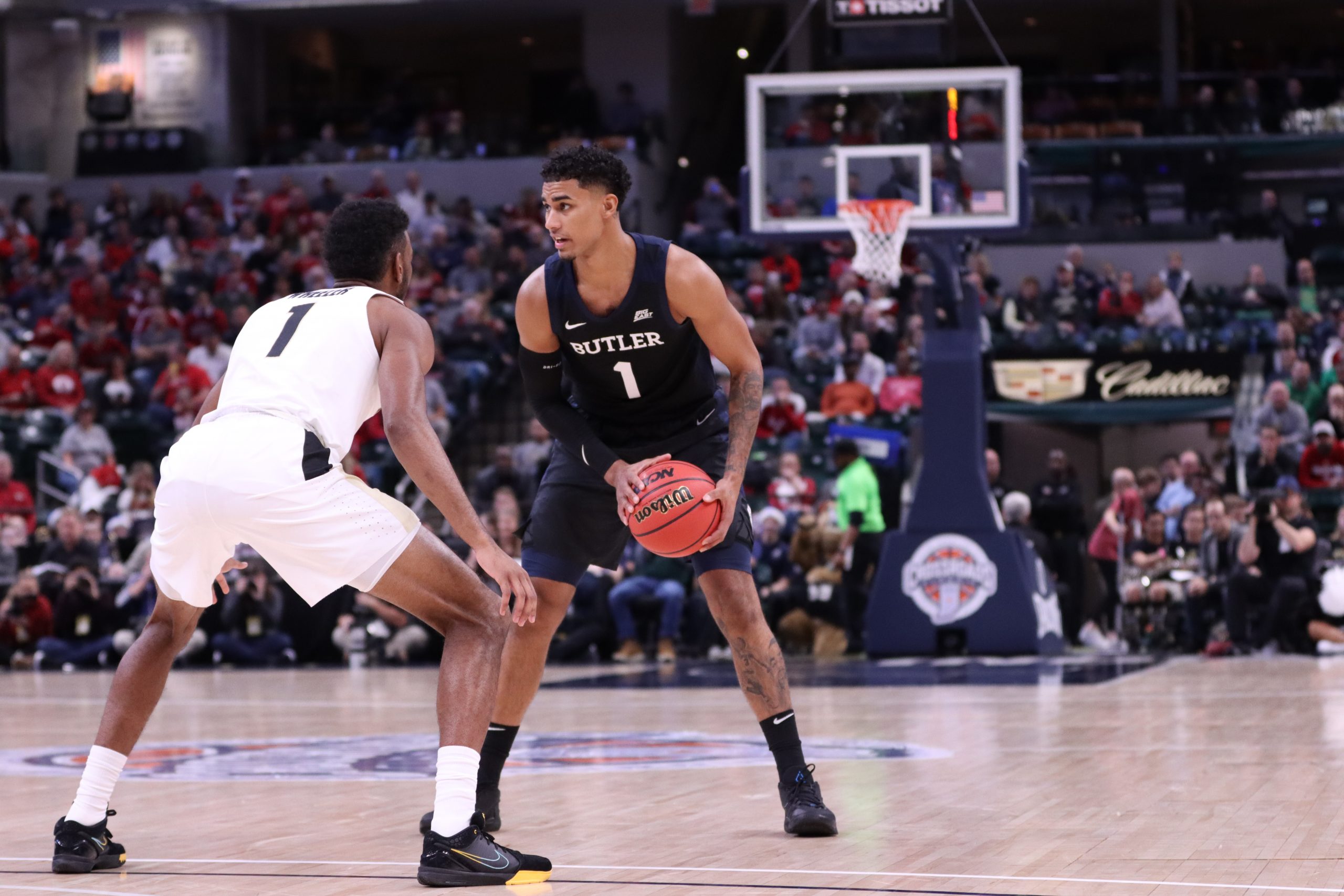 Jordan Tucker surveys the court during a game against Purdue on Dec. 21, 2019. Tucker finished with 17 points against the Friars. Photo by Chandler Hart / Collegian file photo.

The Butler men’s basketball team took a trip to Rhode Island and led for 37:20, defeating the Providence Friars 70-58 inside the Dunkin’ Donuts Center. The Bulldogs are now 15-1 on the season and sit atop the Big East at 3-0 alongside Seton Hall.

Four different Bulldogs were in double figures led by Jordan Tucker and Kamar Baldwin, who each had 17 on the night. Two more players reached double figures and Sean McDermott contributed nine points, as well. As a unit, Butler shot 56% percent from the field and knocked down 50% of their 3-pointers.

On the defensive end, Butler held the Friars to just 32% shooting and a 6-of-25 clip from beyond the arc. It was a three-headed monster for Providence’s offense — and pretty much nothing else. Alpha Diallo, Maliek White and David Duke combined for 47 of the Friars’ 58 points. The other seven players to see the floor for Providence combined for 3-of-24 from the field and 11 points.

Once again, the Bulldogs impressed and this time controlled all 40 minutes on the road in conference play against a hot Providence team. Let’s go beyond the box score of yet another Butler win.

1. Jordan Tucker had his best game of the season.

Jordan Tucker began the game really well. He entered the game with 13:55 remaining in the first half and in five minutes had already knocked down a three, almost forced a steal and took a charge on the defensive end. It ended up being a foreshadowing of the type of game he was about to have. The Duke transfer had 17 points on 7-of-11 shooting, knocking down three of the five deep ones he attempted and also pulling down six rebounds.

When Tucker plays well, he adds another dimension to this Butler team. Not only did he create on the offensive end in this game — he knocked down a step-back jumper and bailed Butler out late in the shot clock multiple times — but he got it done on the defensive end and on the glass. Tucker finished with a +8 plus or minus and wasn’t just good in one half or the other. He had eight points and two rebounds in the first half and followed that up with nine and four in the second 20 minutes.

When Tucker scores, it really isn’t fair how many different places Butler can score from. Tonight, four different players scored in double figures, not including Sean McDermott, one of the nation’s best shooters, or Aaron Thompson, who had an uncharacteristically slow game distributing the ball on the offensive end. Three different Butler players knocked down threes and that’s without Christian David or Khalif Battle, who are both capable of knocking down deep ones, taking any shots. As an aside, Christian David led the team in +/- without taking a shot. He impacts the game on so many levels.

Tucker is the x-factor for this Butler team. When he plays well, a top 10 team gets even more dangerous.

2. Butler struggled some with turning the ball over, but they were the right kind of turnovers.

Butler turned the ball over 17 times in this one, not great. But there was a difference between these turnovers and the 24 they had at St. John’s that made them much less killer. Of course, there were seven less, but they were also dead-ball turnovers instead of live-ball turnovers that turned into fast break opportunities for the Friars.

Instead of turning the ball over due to full-court pressure, the majority of the turnovers were a result of Bryce Nze losing the ball in the post or Thompson making a couple of rare bad passes. They didn’t leave Butler in nearly as vulnerable a position as they did against St. John’s.

Seventeen Butler turnovers turned into 12 points for the Friars, not great, but could have been much worse. Providence had just five steals — compared to St. John’s 16 steals — which limited the number of fast break points and easy opportunities they got. Providence won the turnover battle by nine, but the nature of the turnovers made the impact much less apparent in the final score or the stats sheet.

When the Friars did break out the full-court press, Butler did a solid job handling the pressure and it often turned into a good look for the Bulldogs on the offensive end.

3. Butler dominated the interior in a big way.

I’ve been saying all season that Butler can win without shooting the three well this season. And this game, even though they were 50% from beyond the arc, is a perfect example of that. Last season, Butler never took fewer than 17 threes in a contest. Tonight, they took 12. They dominated this game starting on the interior and then worked their way out only taking good looks from deep rather than going to that option first.

Butler shot 58% from the field on 2-point field goals — 19-of-33 — and got to the free throw line 21 times. They had 36 points in the paint and 14 second-chance points. They were simply bullying Providence on the interior.

On top of that, they absolutely dominated the Friars on the glass. After the first five minutes, defensive rebounds were a problem, but Butler ultimately won the rebounding battle 44 to 26. They outrebounded Providence 34-15 on the defensive glass and pulled down 10 offensive rebounds. Six(!) Bulldogs had five rebounds or more including Baldwin and Thompson who combined for 13 on their own.

Just like defense, rebounding consistently was a problem last season. It’s no coincidence that Butler’s defense has reached an elite level while they are rebounding much better. Butler was too good for Providence in both of those categories tonight.

I was feeling a random stat for tonight’s final thought, so here it is. Providence led for exactly 0:00 of this game. Butler scored the first points of the game and never surrendered the lead. Five other times this season, Butler’s opposition didn’t lead a single second. This time they did it against a team that was 3-0 in Big East play coming off a road win at Marquette. The Bulldogs were the definition of controlling against the Friars.