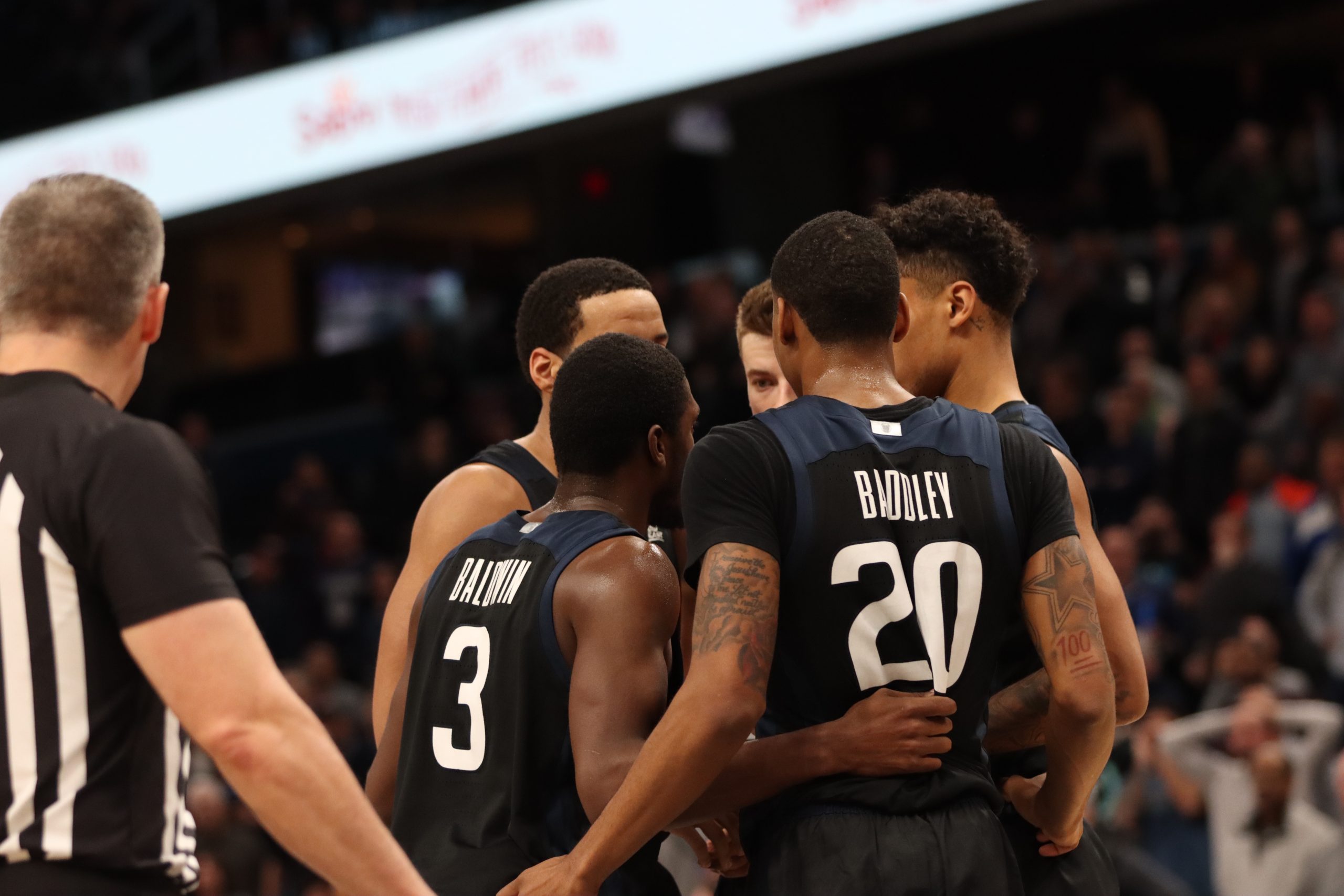 Butler huddles up during a game against Georgetown on Jan. 28. The Bulldogs erased an 11-point halftime deficit to win the game by five. Photo by Xan Korman.

Despite a thin rotation for the second straight game, the Butler men’s basketball team erased an 11-point halftime deficit to defeat the Georgetown Hoyas 69-64 at the Capital One Arena on Jan. 28.

The Bulldogs are now 17-4 and 5-3 in Big East play with four of their next five games coming within the safety of Hinkle Fieldhouse. After a three-game skid that left Butler in the middle of the conference standings, they have set themselves up to take control of a top-three spot in the standings as we approach the halfway point of conference play.

Sean McDermott backed up his 16-point performance against Marquette with an even more impressive 25-point performance on 9-of-12 from the field. Only Kamar Baldwin reached double figures along with McDermott, but four other Butler players had six or more points.

After giving up 43 points in the first half, the Bulldogs responded by allowing just 21 points in the second 20 minutes of the game. It’s the first time since Jan. 10 that a Butler opponent hasn’t scored more than 70 points.

Georgetown’s Mac McClung and Omer Yurtseven both entered the game averaging roughly 16 points per contest. The two combined for just 26 points on 8-of-30 shooting. The Hoyas shot just 33% from the field as a team and knocked down just five 3-pointers.

We go beyond the box score of a big come-from-behind road win for the Bulldogs.

The “tale of” saying is cliché, but it accurately depicts what happened at the Capital One Arena. Two completely different Bulldog teams took the floor before and after halftime.

In the first half, the Hoyas scored 43 points and didn’t exactly struggle to do it. They were 14-of-30 from the field and made two of the four 3-pointers they put up. But what hurt the Bulldogs more than anything were the extra possessions and free points the Hoyas were getting.

In the first 20 minutes, Georgetown went to the line 14 times and knocked down 13 of them on 12 Butler fouls in the first half. The Hoyas are not a great 3-point shooting team but they didn’t need to be early on because they were getting to the free-throw line at an alarming rate and knocking almost all of them down. Despite knocking down three more triples and having only two fewer field goals, the Bulldogs were down 11 thanks to those free throws.

On a similar note, Butler turned it over 12 times in the first half resulting in 17 Georgetown points. Credit the Hoyas for forcing live-ball turnovers — they had seven steals at halftime — and making the most of Butler’s mistakes and their fast break opportunities.

The second half flipped the script. The Bulldogs turned it over just three times — for two Georgetown points — and only committed six fouls sending Georgetown to the line only six times. As a result, they only gave up 21 points in the second half and the Hoyas went 7-of-33 from the field as a team.

It’s not rocket science as to why Butler won the second half by 16. McDermott caught fire, the defense was much better and they didn’t turn it over. But to do it on the road without Aaron Thompson makes it much more impressive. The Bulldogs didn’t look good in the first half but turned in a completely different performance to win the game in the second frame.

2. Sean McDermott led the way, but it was a complete offensive performance.

McDermott is officially out of his early conference play slump. He backed up his 16 against Marquette with 25 points against Georgetown, his second-most points in a game this season. He got off to a quick start and was the reason Butler was in striking distance still after the first half. He then led the charge out of the gates in the second half where the Bulldogs went on a 24-9 run. He had 14 points in the second frame including four triples and he continues to impact the game night in and night out on the boards pulling down eight more in this contest. The only thing he did wrong was missing the front end of two 1-and-1’s late in the game but that was about it.

McDermott was the catalyst, but the Bulldogs got solid production from a lot of players in this game. Bryce Nze and Bryce Golden were both impactful. Nze finished with eight points, seven rebounds and four assists — the five turnovers are worrisome but weren’t detrimental — and Golden contributed seven points and five rebounds of their own. Their defense won’t get a section all to itself, but they forced a walking double-double in Omer Yurtseven to 4-of-14 from the floor and canceled out his performance between the two of them.

Baldwin backed up his 31 points with 13 points, three rebounds and six assists. Henry Baddley and Jordan Tucker were solid as well. Baddley quietly put together an active night and finished with a plus/minus of 12 to lead the team.

3. It’s important that Butler build on these back-to-back wins.

I hinted at this in the intro, but Butler has a great opportunity to build on this two-game win streak in response to three straight losses. The next couple weeks look like this for the Bulldogs: Home against Providence and Villanova, on the road at Marquette and then back home for games against Xavier and Georgetown. Four of those five teams are behind Butler in the Big East standings except for Villanova who will have to beat Butler inside Hinkle Fieldhouse.

The next five games will have a major impact on where Butler finishes in the Big East this season. They are tied for third in the Big East right now and a 4-1 or 5-0 next five games would put them firmly in the top three of the conference. Hypothetically, a win against Villanova would help them gain a game on the Wildcats in conference and add another Quadrant 1 win to the resumé.

Butler is past the toughest part of their conference schedule. They need to take advantage of the momentum of this two-game win streak and turn it into a solid three weeks of basketball.

The response in the second half of the last two games is encouraging, but Butler is making it hard on themselves with their first half performances. The Bulldogs haven’t won the first half since they led by 10 against Seton Hall two weeks ago. It ultimately hasn’t cost them a win in the last couple of contests, but the Bulldogs have let the other team set the tone on more than one occasion over the last four games.