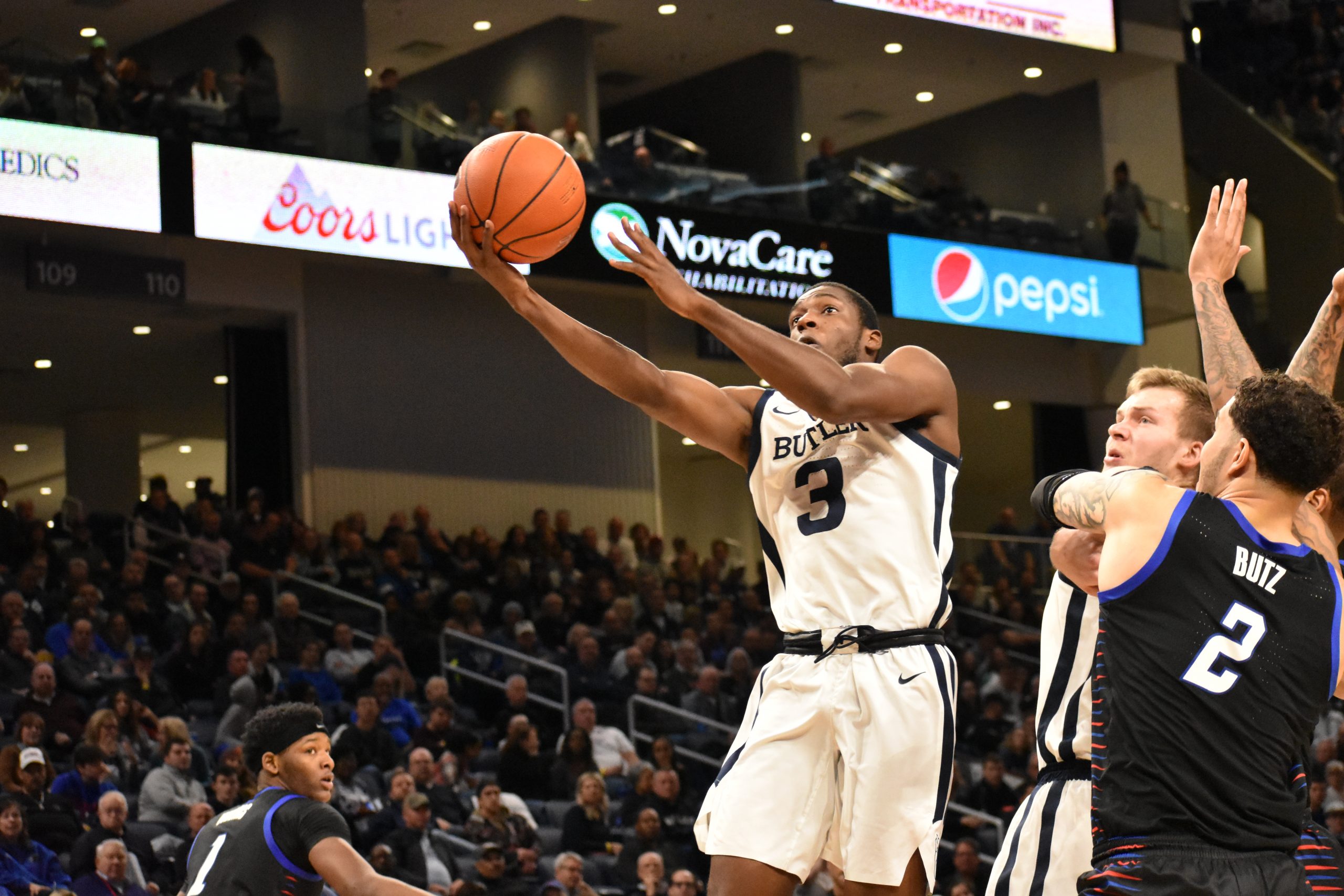 Kamar Baldwin takes a contested shot against DePaul on Jan. 18. Baldwin led the Bulldogs with 16 points in the loss. Photo by Donald Crocker.

The Butler men’s basketball team didn’t do a great job bouncing back from its home loss to Seton Hall. The Bulldogs lost to the DePaul Blue Demons 79-66 inside Wintrust Arena. Butler started slow and never caught up, DePaul led 22-6 early and never looked back, getting its first win against a top 5 team in 14 years.

The Blue Demons put on an offensive clinic in this one. One of the Big East’s worst 3-point shooting teams shot 10-of-17 from beyond the arc and seven of their first 10. Paul Reed didn’t miss until there were under five minutes to go. He led the Blue Demons with 23 points on 8-of-9 shooting along with nine rebounds. Jalen Coleman-Lands got nine of his 20 points from the free throw line — more on that in a moment — and was 4-of-7 from the field.

On the contrary, Butler shot just 41% from the field as a team and 33% from beyond the arc. They are now just 13-of-42 from beyond the arc in the last two games. Kamar Baldwin led Butler with 16 points but it took him 16 shots to get there. Jordan Tucker and Sean McDermott were the only other Bulldogs in double figures.

The ball movement wasn’t there either. The Bulldogs assisted on just eight of their 22 baskets and only dished out three of them in the second half. Let’s talk free throws, turnovers and slow starts as we go beyond the box score.

1. Butler started really poorly and could never bounce back.

Butler looked flat out of the gates and DePaul didn’t, specifically Paul Reed. Reed scored 13 of DePaul’s first 17 points and was tied with Butler by himself at the under eight media timeout of the first half. The same uninspiring performance started the second half. After eight minutes in the second frame, Butler had just two field goals and six turnovers. A deficit that was just 10 at halftime stretched all the way to 21, Butler’s largest deficit of the season.

The Bulldogs have been really good at getting off to good starts all season. It has allowed them to set the tone and play at their desired pace from the get-go. Today, the Blue Demons jumped on Butler quickly and the Bulldogs kept shooting themselves in the foot and never really giving themselves a chance to get back in the game.

The Big East is too good and too tough, especially on the road, for Butler to continue to not play 40 minutes of basketball. They got pretty close against Creighton, but in every other Big East game they’ve either not started well or allowed a team to come clawing back at some point — see St. John’s and Seton Hall. Butler’s schedule isn’t going to get much easier, if any easier, and they need to figure out how to put a complete game together or conference play is not going to be really tough.

Butler has been good at two things for much of the season: not making mistakes and playing elite defense. As a result, coaches have consistently called Butler the most connected and disciplined team they have played. They were neither of those things today.

For starters, DePaul shot 32 free throws in this game. Butler could not guard without fouling. Sure, there were some fouls that were questionable, but the Bulldogs fouled jump shooters are multiple occasions — including the one that fouled Bryce Nze out in just 13 minutes of action. Fouling jump shooters doesn’t mean anything other than undisciplined defense. The Blue Demons had 15 points from the foul line at halftime and 10 more in the second half.

When Butler wasn’t fouling, DePaul was knocking down every 3-pointer they shot. At one point, they were 7-of-10 from beyond the arc. Yes, it was a great day for DePaul, but Butler’s perimeter defense was nowhere near what it has been the rest of the season. The Bulldogs were a step late on closeouts all day and the Blue Demons made them pay.

Butler also couldn’t take care of the basketball, again. The Bulldogs turned the ball over 17 times for 15 DePaul points. When coupled with too many fouls and a hot shooting team, it’s no mystery the Bulldogs never led in this game. A team that has been so disciplined all season wasn’t at Wintrust Arena on this day.

3. Butler has to bounce back quickly.

All of a sudden, Butler has lost two games in a row and a road game at Villanova is up next. If Butler fancies themselves as a contender to win this conference, they’re going to need to get back on track quickly. They now have a home loss to Seton Hall and a road loss to an 0-4 Big East team in the last week and are quickly falling behind the Pirates and Wildcats at the top of the conference.

There’s no reason to panic, the Bulldogs are still, obviously, in a very good position and will still be in the top 25 come Monday. They will comfortably make the NCAA tournament barring some historic collapse. However, two of Butler’s next three games are on the road and they play Villanova twice before Feb. 5. Days like this happen when one team plays at another level than they usually do, but the Big East schedule doesn’t provide any gimme games this season.

Butler isn’t that bad. DePaul isn’t that good. These things happen. But there are definitely issues that have turned into trends in conference play that Butler needs to address and correct to return to the level of play at which the Bulldogs were playing in nonconference.