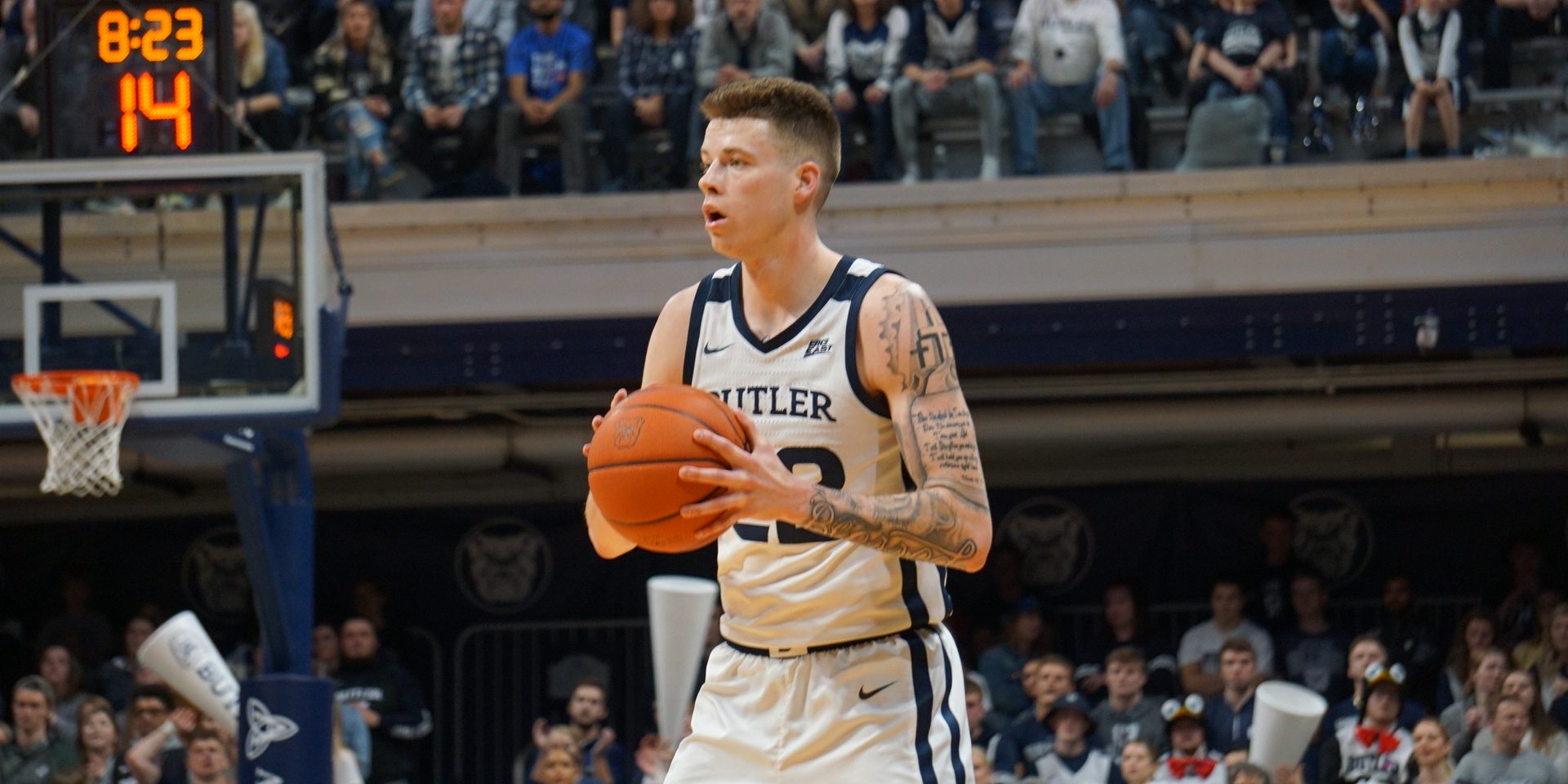 Sean McDermott looks for an open move during Butler’s 71-57 win over Creighton on Jan. 4. McDermott finished with 18 points and 11 rebounds for his second consecutive double-double. Photo by Becca Atchley.

Behind a double-double from Sean McDermott, 20 second-half points from Kamar Baldwin and another strong defensive effort, the Butler men’s basketball team defeated Creighton 71-57 at Hinkle Fieldhouse on Jan. 4 to move to 14-1 on the season and 2-0 in Big East play.

Here’s a look at some of the key news, stats, notes and quotes from Butler’s first win of the decade:

McDermott carried the Bulldogs’ offense in the first half, and finished with his second straight double-double. The redshirt senior scored 12 of Butler’s 24 points in the first 20 minutes on 5-of-7 shooting from the field. McDermott tacked on another six points in the second half to finish with 18, and tallying a team-high 11 rebounds, marking his second double-double in a row. He posted 12 points and 10 rebounds against St. John’s on Dec. 31 for the first such game of his career.

After a rough first half, Baldwin flipped the switch in a big way down the stretch. After suffering an ankle injury against St. John’s, the senior guard was cleared to play against the Bluejays, but didn’t appear at full strength in the first half. Baldwin was 0-of-9 from the field in the first half and didn’t tally an assist or a rebound. In the second half, he did what he’s shown time and time again that he’s capable of, putting the team on his back. In the final 20 minutes, Baldwin scored 20 points on 7-of-13 shooting.

Creighton cut Butler’s lead down to as little as four points with 6:32 left in the second half, but the Bulldogs were able to fend off the Bluejays’ comeback attempt. “The players, we all got together and said if we want to win this game we need to dig in and get stops,” McDermott said after the game.

The Bulldogs limited one of the top 3-point shooting teams in the country to under 20% from beyond the arc. Creighton entered the game knocking down 37.5% of its 3-point shots this season, a mark inside the top 40 nationally. After Butler held the Bluejays to just 3-of-15 from beyond the arc in the first half, it seemed almost inevitable that a strong perimeter shooting stretch would come in the second half. But it never did, as Creighton was just 1-of-7 on 3-point shots in the second half and finished 18% for the game.

Butler’s victory snapped Creighton’s eight-game winning streak. The Bluejays hadn’t lost since Nov. 28 – an 83-52 loss to San Diego State – and were coming off a convincing 92-75 victory over Marquette in their conference opener.

Creighton head coach Greg McDermott had high praise for the Bulldogs, both offensively and defensively. “I think the sum of their parts is really good,” he said. “I haven’t seen many teams as connected on both ends as they are.”

Butler is off to its first 14-1 start since the 2008-09 season. That season, the Bulldogs won the Horizon League regular season championship and earned an at-large bid to the NCAA Tournament, where they fell to LSU in the first round. This is the sixth time this century Butler has started the season 14-1.

The Bulldogs are 2-0 to start conference play for just the second time since joining the Big East. In December 2017, Butler defeated Georgetown on the road in double overtime and upset No. 1 Villanova at Hinkle in the only other such conference start.

Up next: The Bulldogs will travel to Rhode Island to take on Providence at 9 p.m. on Friday, Jan. 10. The Friars are the only Big East team which did not receive votes in the most recent AP top 25 poll. Providence entered Jan. 4 8-6 on the season, with a matchup at DePaul set for 2 p.m. Following a 76-60 home win over Georgetown on Dec. 31 to open conference play, the Friars entered Saturday 108th in the NET rankings and 72rd at KenPom. Last season, the Bulldogs dropped both their matchups against Providence.