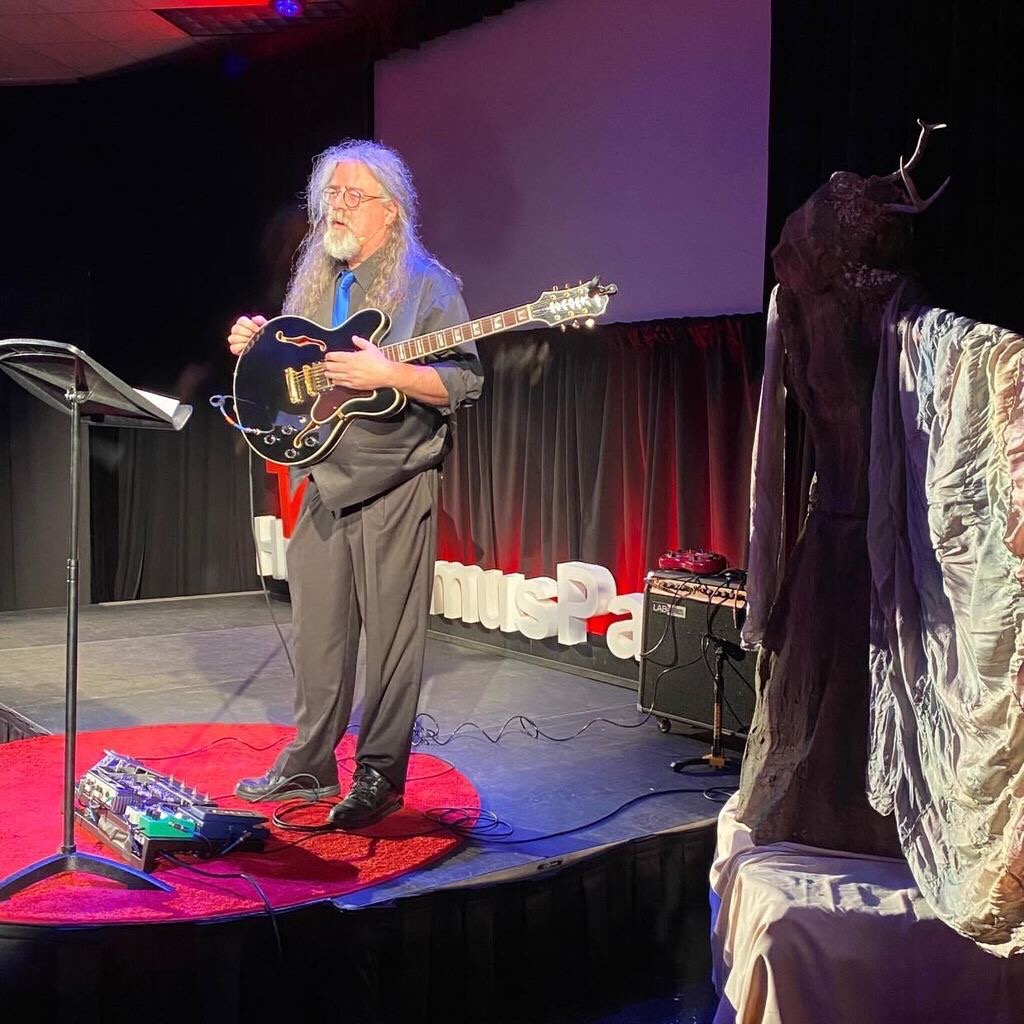 As a musician, Butler professor Frank Felice is accustomed to improvising. Whether it is a jazz solo, an improvised section in a post-modern composition, or even losing one’s place on a page of sheet music, musicians are trained to think on their feet. Felice, who teaches music composition and electronic music at Butler, believes this ability is relevant far beyond the world of music.

“Everybody’s going to improvise,” Felice said. “You need a plan of action as to how to handle yourself when that situation arises.”

Felice presented on this topic of improvisation at the second-annual TEDxHieronymus Park event in his hometown of Hamilton, Montana on Jan. 17. Felice was one of 12 speakers selected for the event. Felice’s presentation was titled “Make it Up As You Go Along — Improvisation in Art & Life.”

Technology, Entertainment, and Design is a nonprofit organization devoted to sharing “Ideas Worth Spreading,” usually in the form of speeches that are given in 18 minutes or less. TEDx events, such as the Hieronymus Park event, are independently organized, but sponsored by TED.

Felice is a fan of TED Talks and is a frequent listener of the TED Radio Hour. However, he had never seen a TED Talk live before giving one himself.

“I am so curious about everything in the world,” Felice said. “It’s a guaranteed learning experience, but such a good time to listen to these talks.”

The goal of his presentation was to give his audience tools to navigate any situation through three steps: prepare, face your fear and do it. In his presentation, Felice gave researched advice on how to approach situations in life where one is forced to improvise. He said improvisation is not limited to art, but that it can be something as universal to the human experience as having a difficult conversation with a friend or family member.

To reinforce that improvisation is important both in art and in life, Felice took the stage with an electric guitar in hand. Twice during his presentation, he did short segments of guitar improvisation using an echo-reverb effect.

“I was thinking, acting and reacting to what I was hearing,” Felice said, describing the mental approach he took to creating art through improvisation.

According to Felice’s presentation, the first step — preparation — is vital for success in any improvisation situation. Felice researched how various types of artists prepare. For example, musicians learn chords and scales, while stand-up comedians learn how to respond to an audience in real time.

“And how did I prepare?” Felice asked about his presentation.

He researched everything he could on the internet about how different types of people prepare for situations where there is not always a script to follow.

Felice believes that his audience responded most to his second step, facing fear. In his presentation, he quoted the author Frank Herbert’s novel “Dune”:

“I must not fear,” Herbert’s quote reads. “Fear is the mind-killer. Fear is the little-death that brings total obliteration. I will face my fear. I will permit it to pass over me and through me. And when it has gone past I will turn the inner eye to see its path. Where the fear has gone there will be nothing. Only I will remain.”

Lastly, one needs to simply put themselves in a position where they are forced to improvise.

“That takes a bit of courage, but then when you’re up there, you just do it,” Felice said. “And you rely on your prep, you rely on the fact that you’ve looked fear in the eye and figured out how to move around it and keep going.”

Junior Sam Stucky, a student of Felice’s, believes Felice is an ideal candidate for presenting a TEDx Talk.

“He’s such a well-rounded person, and I feel like that’s one of the main things you see in Ted Talk speakers,” Stucky, a music composition major, said.

In addition to his musical career, Felice expresses his creativity through cooking, home brewing, painting, poetry, paleontology, philosophy and theology. Stucky believes that Felice’s hobbies outside of the realm of music contribute to his well-roundedness.

Stucky said that as a professor, Felice makes it easy to learn because he communicates things in a way that relates to an audience, and that this skill further qualifies Felice to teach a TEDx audience.

“Since I teach some of this kind of stuff to some of our performers here, [the theme of improvisation in art and life] seemed like a good idea,” Felice said.

However, Felice said the process of choosing a topic for his TEDx talk was not an easy one. TED Talks can often be heavy in content, and Felice did not know whether to take an approach that was heavy or if he wanted to do something that was a bit more lighthearted. Ultimately, he chose to find a happy medium with the topic he chose.

“I tried to split the middle between something that would be maybe a little entertaining, but also maybe be useful,” Felice said.

As a jazz musician, first-year Mitchell Remington found the message of Felice’s presentation to be relatable.

“[Jazz improvisation is] very reactionary, it’s a lot of thinking on your feet,” Remington, a jazz studies and economics double major, said, “And when you’re improvising in life, there’s no chord changes, so that’s the skill that I think really translates there. Because improvisation in music is obviously a very fine-tuned thing.”

Felice highly recommends the TED Talk experience, whether as a listener or speaker. He said that both in presenting and listening, one is guaranteed to learn. Through this experience, he learned more about public speaking, specifically, how to be more concise and pithy in his speech. He also enjoyed learning from watching the other talks throughout the day and speaking with other presenters.

“It’s marvelous,” Felice said. “Any time you can go to see a TED Talk or TEDx Talk done live, done locally, go. I would also say that the people who organized [TEDxHieronymus Park] were brilliant. It was so incredibly professionally well-done and just wonderful.”

Through both his words and his guitar, Felice’s presentation provided an opportunity for the audience to approach difficult and unpredictable situations in a new way.

Prepare, as Felice said. Face your fear. And just do it. Both in art and in life.