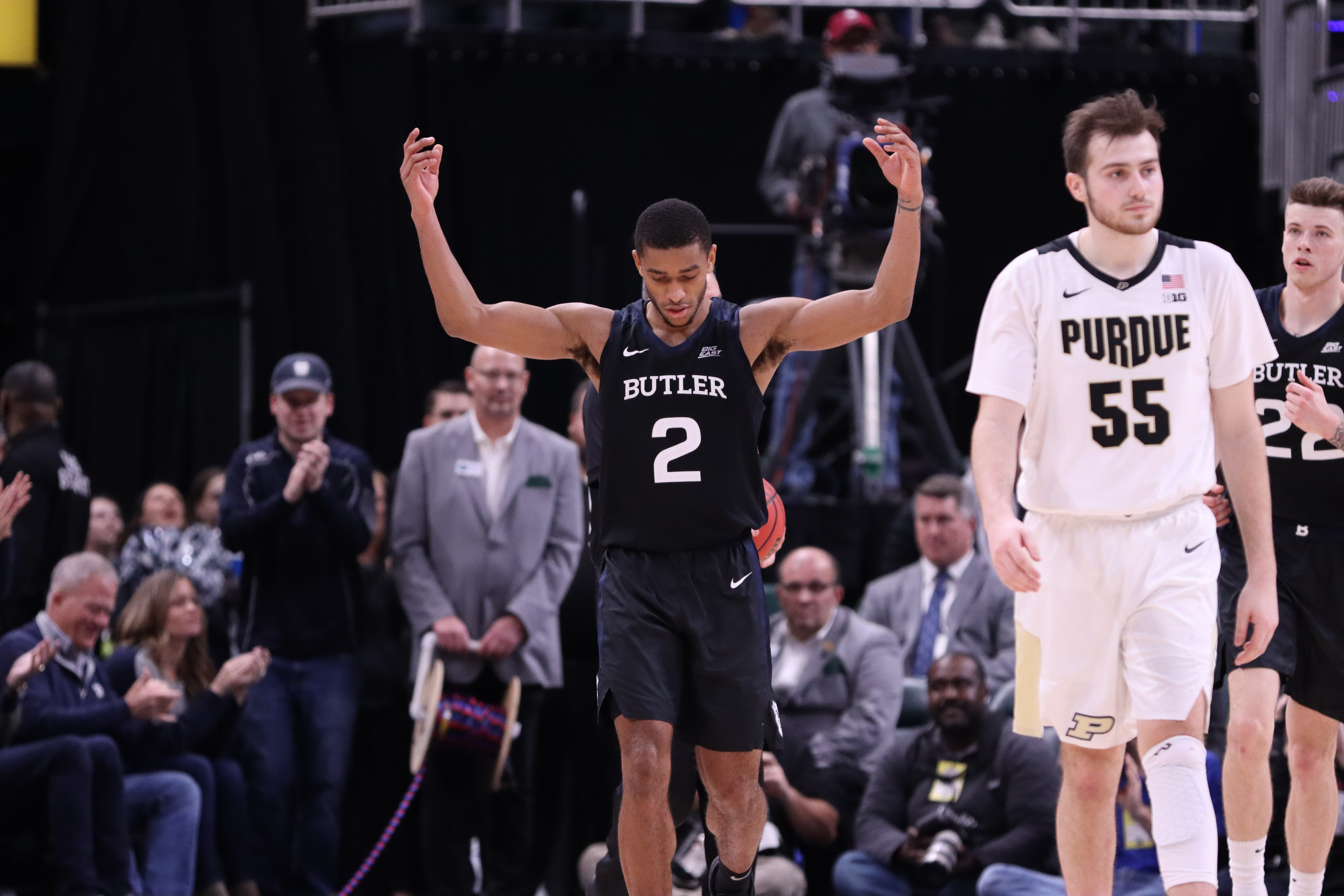 Aaron Thompson celebrates after getting fouled in the final moments of Butler’s 70-61 win over Purdue in the Crossroads Classic on Dec. 21. Photo by Chandler Hart.

The Butler men’s basketball team improved to 11-1 on the season and further cemented itself as one of the top teams in college basketball this season to date with a 70-61 victory over Purdue in the Crossroads Classic on Dec. 21. Four Bulldogs reached double figures as the team held off a late Boilermakers comeback. Here’s a look at some of the key news, stats, notes and quotes from the victory:

This is Butler’s first win over Purdue in just over four years. The Boilermakers defeated the Bulldogs twice during the 2017-18 season. Prior to that, Butler had won five straight games in the series, spanning from 2001-2015. The Bulldogs’ last victory over Purdue was a 74-68 win on Dec. 19, 2015, in the Crossroads Classic. Roosevelt Jones led Butler with 19 points and 11 rebounds.

In the first half, Butler limited Purdue to just 21% from the field, the worst an opponent has shot in a half against the Bulldogs this season. The closest mark was Baylor’s 24% second half on Dec. 10. The Bulldogs held the Boilermakers without a field goal for the final 7:23 of the first half.

Purdue made a push late in the second half that required the Bulldogs to knock down their free throws. With 5:38 to play, Butler led by 17. The Boilermakers then went on an 18-5 run, knocking down three 3-pointers in the process and cutting the Bulldogs’ lead to just four with roughly a minute to play. The Boilermakers started fouling, hoping the Bulldogs, who were just 13-of-24 on free throws at the time, would continue to struggle from the charity stripe. Butler converted its final eight free throw attempts to prevent Purdue from getting any closer.

Bryce Golden had an impressive game on both ends of the court. The sophomore forward’s 14 points are the most he’s scored in a game since 17 points in Butler’s season opener against IUPUI. Golden also played a key role in limiting Purdue big man Trevion Williams to just 5-of-14 from the field.

Butler head coach LaVall Jordan credited Golden for the work he’s put in to get to this point. “A lot of credit to him for what he’s done with his body over the summer, his commitment to his teammates and training to be ready for moments like this,” Jordan said.

Matt Haarms’ absence was clearly a factor in this game. With the seven-foot, three-inch center out due to a concussion, the Boilermakers lost the rebound battle for the first time this season. Butler out-rebounded Purdue 36-30 and also limited the Boilermakers on the inside in other ways, outscoring them in the paint 26-16 and holding them to just 27% – 10-of-37 – on 2-point shots.

Jordan said Butler is still working on putting together a complete game from start to finish. “We still haven’t put together 40 minutes,” he said. “We’re still hungry and hunting for 40 minutes. … Obviously there’s a lot of resistance when you go against good teams like Purdue.”

Purdue head coach Matt Painter was clearly frustrated with his team following its fifth loss of the season. “Collectively we’re not a mature group,” Painter said. “We’re mature people. But we’re not a mature basketball team yet.”

Up next: Butler will have a week off from game action before hosting Louisiana-Monroe at Hinkle Fieldhouse on Saturday, Dec. 28. This is the Bulldogs’ final nonconference game of the season, as Big East play begins just three days later at St. John’s. The Warhawks are 4-6 on the season and coming off a 62-59 loss against Arkansas State on Dec. 21. Louisiana Monroe is currently 268th in the country in KenPom’s rankings.