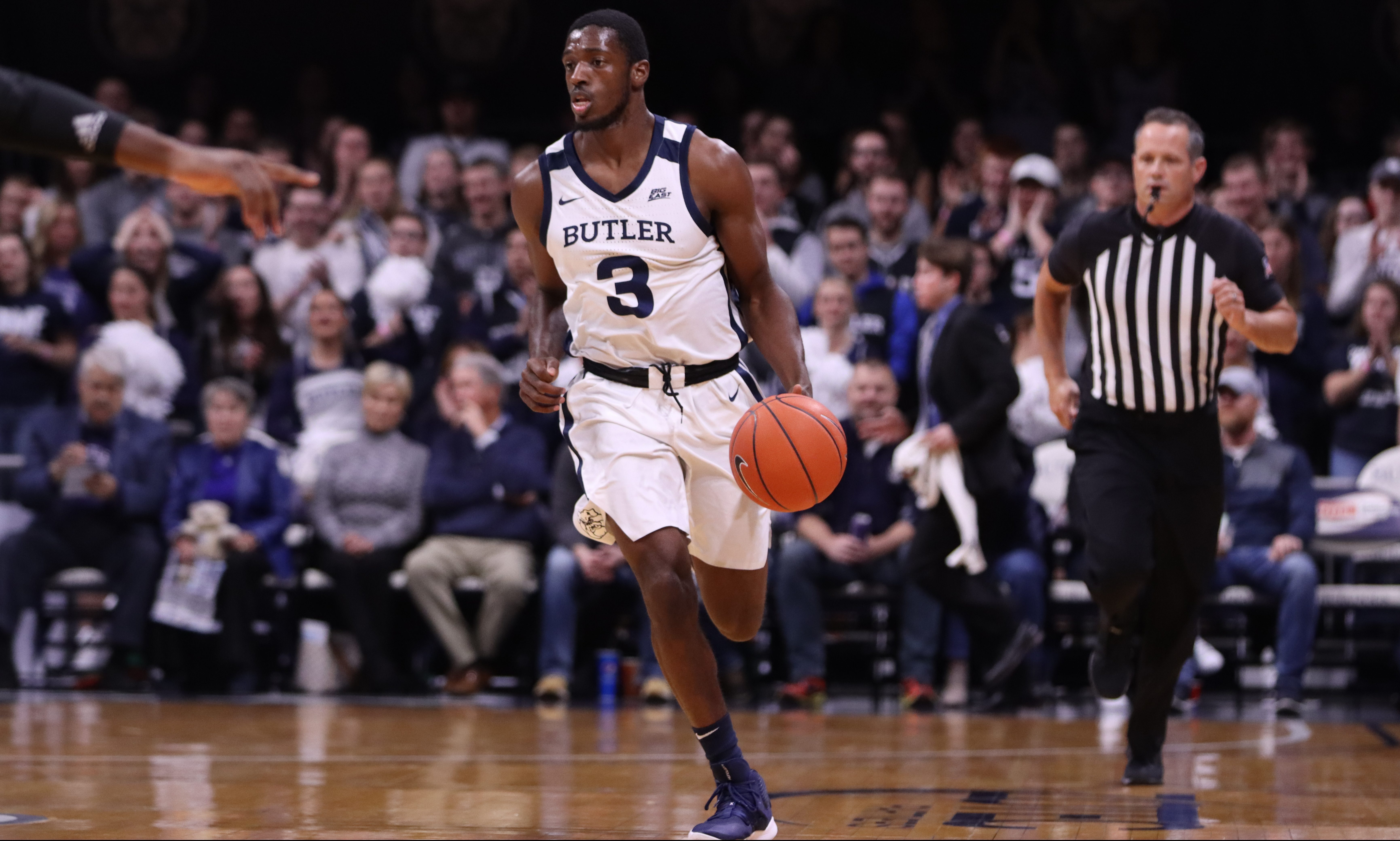 Kamar Baldwin brings the ball up the floor against Wofford on Nov. 16. Baldwin posted a season-high 31 points in the win over Ole Miss. Chandler Hart/Collegian file photo.

Kamar Baldwin finished just one point shy of his career-high, the Bulldogs are 8-0 for the second time this decade and the team passed their first road test in a 67-58 win over Ole Miss in Oxford. Butler finished 2-10 on the road last season but controlled this one at the Pavilion from the tip-off. We go beyond the box score of an impressive win on multiple fronts.

1. Ole Miss threw some punches in the second half and Butler responded every time against an explosive second-half team.

The Rebels have developed a less than ideal habit of starting poorly in games. However, they have an equally helpful habit of coming out firing in the second half and eliminating opponents’ first-half leads. After being outscored by 16 in the first half earlier this season against Penn State, the Rebels responded with a 47-point second half to beat the Nittany Lions by two. Bad first halves haven’t been foreshadowings of how Ole Miss will play in the second frame. After controlling the first half, Butler would have to be just as alert and attentive in the second half.

After getting off to a quick start in the second half where Butler pushed the lead to the largest it had been at that point, Ole Miss started fighting back and throwing punches. Breein Tyree scored 17 of his 22 points in the second half and the Rebels knocked down six threes. With 13:58 left in the second half, Butler led 50-34, Ole Miss went on a run that cut the lead at one point to four with the score of 52-48. Instead of letting Ole Miss take control, Butler went on a 6-0 run of their own to take back control. The game never again got within seven points and the Bulldogs controlled the rest of the contest. Butler knew they were going to get a punch from Ole Miss on the road and they were able to withstand that punch and come out with a win.

2. Butler started the game and the second half on a strong note, something they’ve done all season.

Part of the reason Butler was able to withstand any Ole Miss runs was because of the tone they set early in each half. The Bulldogs led 22-8 after 11 minutes knocking down threes against one of the best 3-point defensive teams in the country. Similarly, in the second half, Butler outscored the Rebels 11-5 in the opening minutes after struggling late in the first half. Instead of letting Ole Miss build on that momentum, Butler stretched the lead to 15, which was the largest lead at that point. Butler did a phenomenal job of setting the tone early in both halves giving themselves some breathing room later in the game.

The coaching staff deserves an immense amount of credit for this trend of starting games strong. Butler clearly has a plan of attack coming out of the gates and halftime in every game. LaVall Jordan and his coaching staff have done a great job so far this season having a game plan early and setting that tone quickly. Butler hasn’t trailed after the first five minutes of a game all season, it is much easier to win basketball games and play the game the way you want to when you are setting the tone early. The Bulldogs have done that all season and they did it again in Oxford.

3. Kamar Baldwin might be playing the best basketball of his Butler career.

In the last 48 minutes of Butler’s season, Kamar Baldwin has scored 48 points, shooting 19-of-27 from the field. He’s shooting it well from deep, getting to the front of the rim and knocking down free throws at an incredible rate — 95% on the season. The senior’s confidence is through the roof right now. While he continues to knock down tough shots, he doesn’t seem to be forcing anything and getting out of the rhythm of the offense. Last season, Baldwin struggled at times being able to gauge when taking over a game and playing within the offense. He’s done both in the last two games. Against Stanford, he completely took over the last eight minutes and then scored 31 points on just 16 shots and did it while working within the offense. On this particular night, Baldwin was the only player in double figures for the Bulldogs, but he was efficient and didn’t disrupt the flow of the offense.

On another note, Baldwin was always the one to knock down the shot to keep Ole Miss at arm’s length. When Butler needed a basket to stop a Rebels run, Baldwin was the one getting a basket to stop the momentum and keep things from getting dicey late in the game. The senior is absolutely lights out right now, and it’s a lot of fun to watch.

Butler looked under control all 40 minutes on the road, which didn’t happen last season. There was one question that couldn’t be answered until tonight: how would Butler look on the road? There is not a whole lot to be concerned about after the first test other than Aaron Thompson’s uncharacteristic six turnovers. Also, Butler’s use of forwards with offensive capabilities — Bryce Golden and Christian David, in particular — in the middle of Ole Miss’ zone defense was a huge part of breaking down that zone in the second half. The adjustment made a half time was an important one and made the offense flow smoother in the second half.