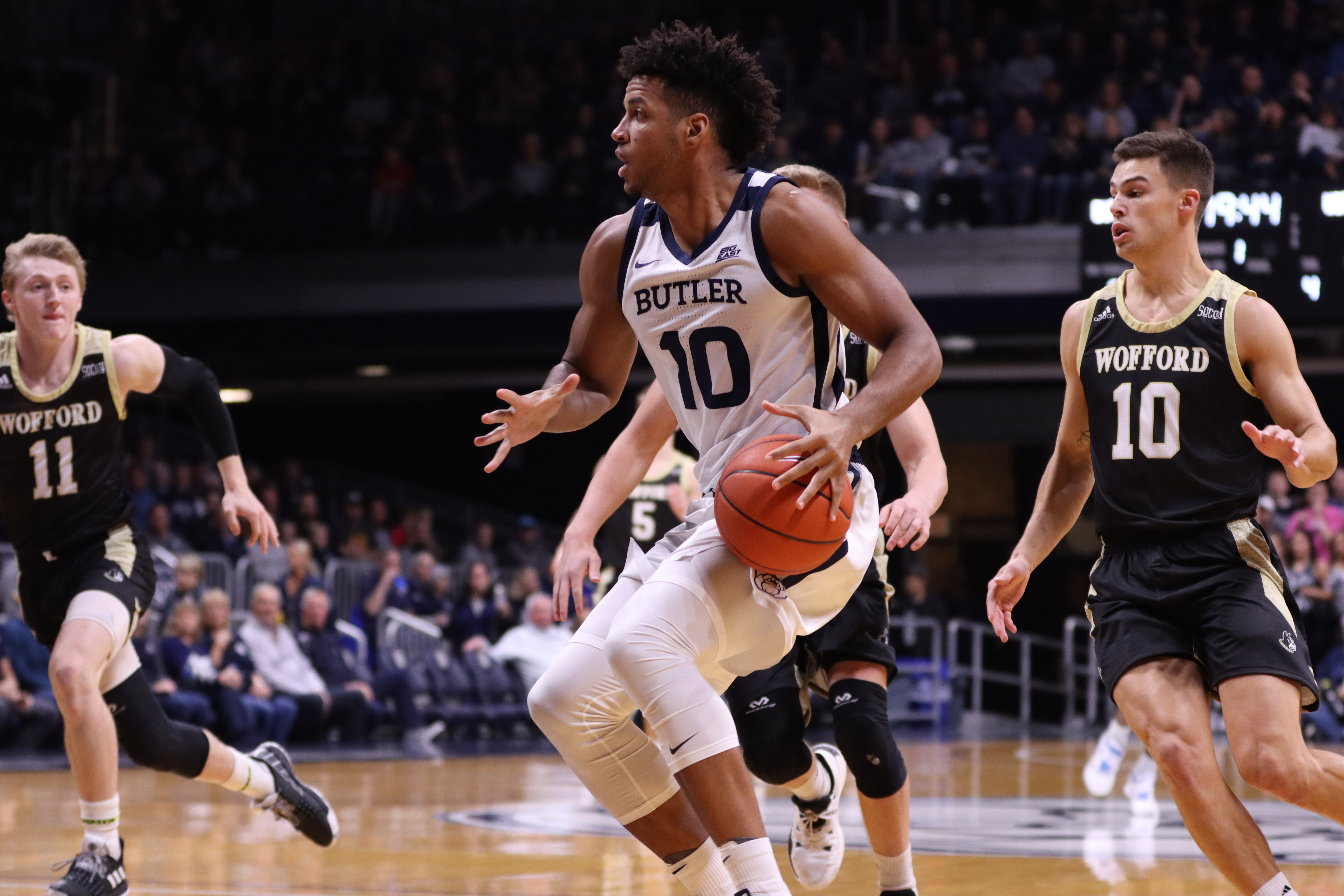 Bryce Nze makes a play against Wofford on Nov. 16. Nze will have his hands full with Kerry Blackshear Jr. against Florida. Photo by Chandler Hart / Collegian file Photo.

After passing their first road test of the season, the Butler men’s basketball team returns to Hinkle Fieldhouse for arguably its most high profile nonconference game since Gonzaga visited Hinkle in 2013. The Florida Gators, a preseason top 10 team, visit Hinkle Fieldhouse with the eighth-best recruiting class in 2019 and one of the most highly touted graduate transfers of the offseason. But they also hold one of the more shaky starts from a preseason top 10 squad. Here’s what you need to know ahead of the second leg of Butler’s home-and-home with the Gators:

1. Butler’s backcourt will be key in this game.

Florida undoubtedly has the advantage on the interior, but we will get to Kerry Blackshear Jr. Where Butler has an advantage is in the backcourt, at least, based on performance so far this season. Kamar Baldwin will be able to score the ball, but where Baldwin and Aaron Thompson will make the biggest impact is on the defensive end. Florida’s offense gets really one dimensional when their guards struggle to score, and that has resulted in some ugly games offensively.

Now, the first of Florida’s two losses came against Florida State, who has proven much better than expected, but the other came on the road against a UConn team that lost to Saint Joseph’s. In their loss to the Huskies, Florida guards — Andrew Nembhard, Tre Mann and Noah Locke — were held to 7-of-25 from the field including 3-of-12 from beyond the arc. The Gators were held to just 59 points in that contest. Even with Blackshear scoring 15 points on just eight shots and pulling down eight rebounds, Florida really struggled to score against UConn and it started with the lack of production from the backcourt. There was a similar narrative against Florida State: the same three guards combined for 4-of-24 from the field in a game where Florida scored just 51 points.

2. Bryce Nze and Butler’s interior are going to have their hands full with Kerry Blackshear Jr.

For the most part, Butler’s interior presence has been pretty solid. The Bulldogs have outrebounded opponents by an average of five rebounds per game — a top 75 mark nationally —  and Nze and Bryce Golden have become a formidable interior duo on the offensive end. However, they haven’t seen a player yet like Kerry Blackshear, especially on the offensive end of the floor. The graduate transfer from Virginia Tech is averaging 12.9 points along with 8.9 rebounds and has five double-doubles already this season.

The other big man that the Bulldogs have faced this season with a knack for double-doubles? Minnesota’s Daniel Oturu. While very few Gophers had good nights against Butler, Oturu dropped a 24-point, 10-rebound double-double on the Bulldogs, giving them all they could handle. In many ways, Blackshear is a better player and will be an even tougher test for Butler’s interior.

3. Florida gets much more dangerous when they shoot it well from deep.

I preface this by saying that Florida is not a good 3-point shooting team — the Gators are 278th in the country in 3-point field goal percentage. But when Florida has looked the best is directly correlated to when they shoot it well from deep. Early in the season, the Gators’ offense was struggling mightily from all over the floor which contributed to their 2-2 start. Since then, the Gators are 4-0. They’ve looked solid twice and looked just OK twice in those four games. Against Xavier and Miami, the Gators shot 38% and 52% from beyond the arc taking out two top 85 KenPom teams. In their most recent game against the Marshall Herd, who boasts a 219th ranking at KenPom, the Gators went 4-of-18 from deep and struggled to a six-point victory at home.

All this to say, Florida has, on paper, the better big man, the better recruits and the better athletes — Scottie Lewis is one of the better athletes in the country — and the same can be said in most of the games they’ve played. When Florida gets uncomfortable and some of that advantage is taken away is when teams turn them into a one-dimensional offense. For Butler, that starts with guarding the 3-point line so as to not open up the driving lanes and interior for the Gators.