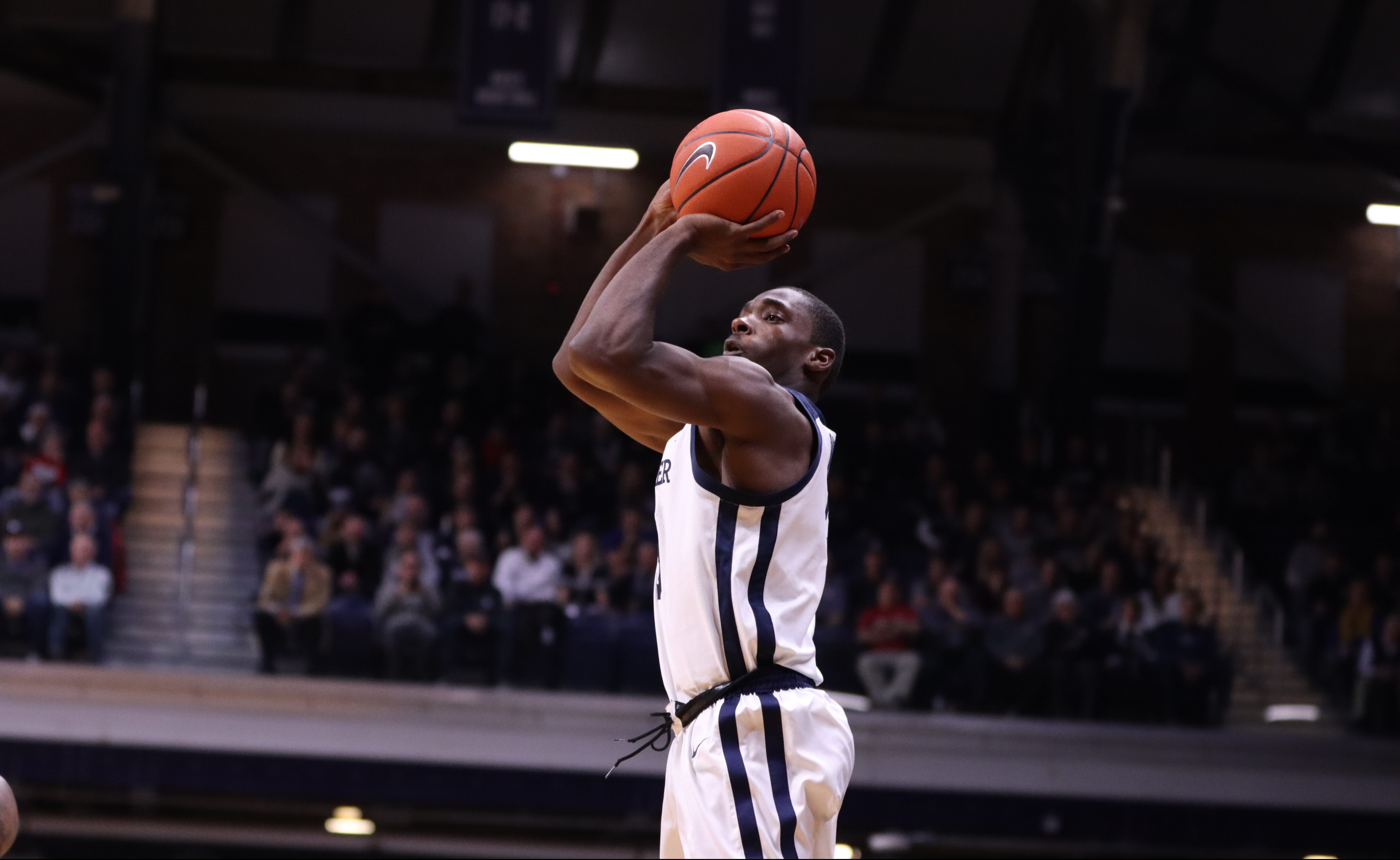 Kamar Baldwin takes a shot during a game this season. Baldwin scored 19 points on 9-of-24 from the field in Butler’s 53-52 loss at Baylor on Dec. 10. Chandler Hart / Collegian file photo.

At one point they trailed by 16, but the Butler men’s basketball team battled back to lose a close one on the road to the Baylor Bears by a score of 53-52. Despite slow nights from everyone not named Sean McDermott and Kamar Baldwin, the Bulldogs’ defense kept them in it down the stretch and Butler again showed they have a toughness down the stretch, even on the road. We go beyond the box score of a tough-to-swallow but encouraging Butler loss.

1. The Bulldogs were the better team in the second half, but couldn’t quite dig themselves out of the hole they dug in the first half.

The first half, and specifically the first 12 minutes, was not pretty from any angle. At the under-12 media timeout, Baylor had taken seven more shots, taken five more threes and was winning the rebounding battle by an eight to three margin. The Bears were getting more opportunities because of their ability to capitalize on Butler’s mistakes on the offensive end and the defensive glass. After 20 minutes, Baylor had nine points off of Butler turnovers while the Bulldogs salvaged no points off of Baylor mishaps — Baylor won that battle 17-5, ultimately — and the Bears were holding a four-point advantage in the second chance points category.

The Bulldogs were absolutely the better team in the second half. They were more efficient while the defense held Baylor to 24% from the field in the second frame including 1-of-13 from beyond the arc. There’s no reason to feel any worse about this Butler team as a result of this loss, but if the Bulldogs want to win road games against high-quality opponents, they can’t dig themselves the kind of hole they did out of the gates.

The Bears have one of the best backcourts in the Big 12 and there are nights when they look like one of the best in the country. MaCio Teague, Jared Butler and Davion Mitchell make up a scary Baylor backcourt that Butler guarded really well tonight. The trio combined for just 24 points and shot a combined 8-of-33 from the floor and 3-of-20 from beyond the arc. To continue the narrative of Butler’s great second half defense, the three guards got just two shots to drop from the floor in the final 20 minutes.

After an offensive explosion of sorts against Florida inside Hinkle, Butler’s defense kept them in the game on the road. The Bears had one of their worst halves of the season in the second half, shooting just 24% from the field, scoring just 19 points. They only dished out three assists, made one three and got outrebounded by the Bulldogs by eight. Head coach LaVall Jordan and his coaching staff made all of the adjustments they needed to at halftime and it almost resulted in a come-from-behind win. But again, it’s hard to come back on the road, especially when the shots aren’t falling.

3. There’s no reason to feel any different about this Butler team. If anything, feel better.

Was this game ugly at times? Yes. It is slightly discouraging that after 25 minutes of game time only three Bulldogs had field goals and it took Kamar Baldwin 24 shots to get 19 points? Yes. However, there is very little reason to feel any worse about this Butler team than you felt when the game started. Baylor is very good and will move into the top 10 in the AP poll after beating the No. 11 — yes, Butler is 11th — team at KenPom. The Bulldogs got off to a slow start and didn’t shoot it well, two things that typically come with road wins, and they still almost escaped Waco with a victory. Nights like these are going to happen; the shots aren’t going to fall and it is going to feel like the Bulldogs can’t get a call to save their lives. The fact that the Bulldogs hung in there with a top 10 team despite those things happening is much more encouraging than any of their struggles are discouraging.

Even the computers gave Butler credit for their performance at Baylor. Before the game began, the Bulldogs were ranked 13th at KenPom, two spots behind the Bears in 11th. Despite the outcome, Butler and Baylor switched spots in Ken Pomeroy’s rankings. The Bulldogs are now ranked 17th in both offensive and defensive efficiency at KenPom. So, in case you weren’t sure Butler was good, the computers are telling you they proved just how good they are, even in the loss.