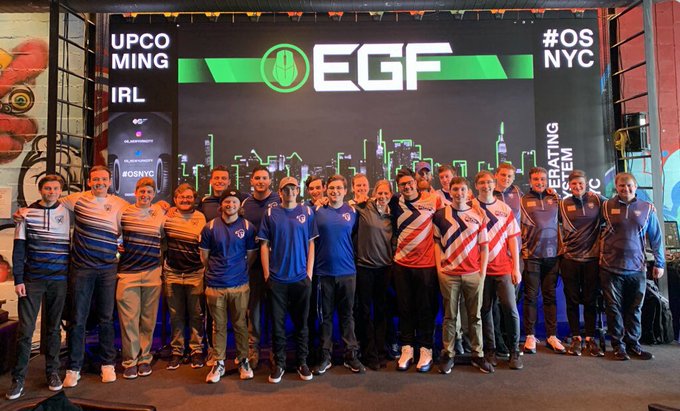 Four members of Butler Esports made the trip to New York City Dec. 6-8 to compete against nine other Big East schools in the 2019 Big East Rocket League Invitational.

Butler came into the tournament as the defending Big East conference champions. On Dec. 7, Butler competed in a double round robin format within a group of three teams: Georgetown University, Seton Hall University and Providence College. They played each team twice and won four of the six matches.

“We knew the other teams would be better because we had a fairly easy schedule because we didn’t play everybody in the Big East,” Stephen Gaa, Butler Rocket League captain, said. “So coming in we just knew we needed to step up our game and unfortunately we just didn’t get to level we needed to. So it was kind of disappointing being the number one seed going into the tournament stage and not being able to live up to that potential.”

The weekend-long event was held at OS NYC, a gaming lounge that is located in the heart of New York City.

After they finished the first part of the tournament on Dec. 7, the team toured around New York City, visiting the Rockefeller Center, Times Square and the 9/11 Memorial.

At the event, there was a total of 50 PCs as well as a handful of various other consoles set up for use.

“The equipment was very high quality and the environment of the studio was very intimate,” Bourquein said. “The space itself was not very big, but it did not feel cramped at all.”

Prior to both of the matches, Butler arrived about an hour early to warm up and to get a better feel of the equipment. Henry Johnston, Butler Rocket League manager, said the ability to adjust your game plan on the fly is the key to success.

“Rocket League is a very fast paced changing game,” Johnston said. “So it’s hard to have a strategy. Think of it like basketball. You can have this kind of passing play because the game changes every single second…So it’s more that you have a general idea of how you should play and you just have to execute well.”

After being successful the past couple of years, Butler’s esports teams began to gain more recognition from the university. It was clear after Butler’s investment into new spaces in Atherton Union and in the parking garage that the school had faith in the program and the gaming industry.

“It’s also very exciting to see that Butler recognizes the effort the club has put in the past year with us winning the previous tournaments,” Johnston said. “It’s a very good feeling to know that we have Butler’s support and they are willing to go the distance with us to increase the level of the program and to make it something that can be around for many years for many students.”

And because the new esports facilities aren’t open yet, the players almost never get to practice or even compete near each other. They usually do so from their respective computers.

But the trip to New York finally gave them a chance to do so.

“This was the first time we ever got to really compete together in a closed environment,” Gaa said. “It definitely drew us closer as a group. Even if the results weren’t what we wanted at the end of the day, it was still nice to better your friendships with the people you play with on a regular basis.”

A few years ago, they couldn’t even get recognized as a club. With two new facilities on the way and an opportunity to travel to the Big Apple to compete under their belt, the team is ready for what comes next.