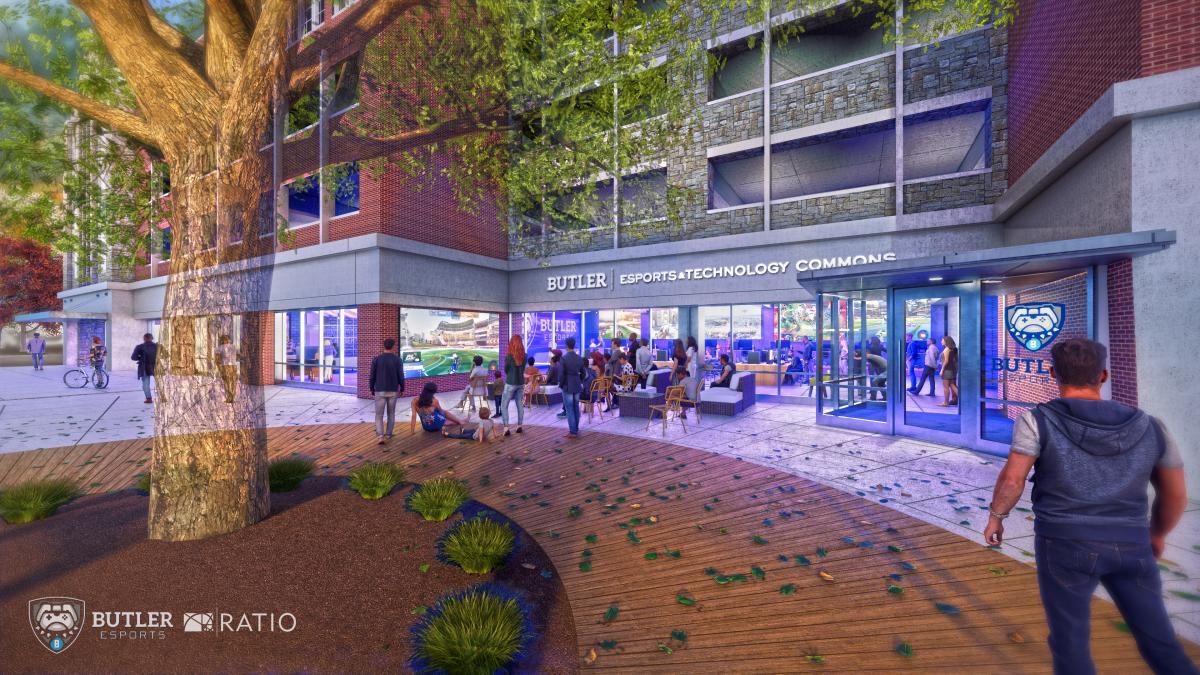 A new Butler esports and technology commons will be opened in the Butler parking garage in the fall of 2020. Rendering courtesy of Butler University.

On Oct. 24, Butler University announced plans to install an esports and gaming lounge in Atherton Union. Set to open in late November, the space will have 16 gaming PCs, an area of gaming consoles and another area for tabletop gaming.

The space will be used, primarily, by Butler Esports as a practice and competition facility. The past few years, students would play on their own PCs in their dorms and homes. This space allows them to physically get together for practices and matches.

“There hasn’t been that kind of team cohesion necessarily, other than what we can accomplish online,” Joe Kirkpatrick, vice president of public relations for Butler Esports and junior pharmacy major, said. “So to have this space in Atherton is gonna be awesome, once that finally goes through.”

In addition to this space, Butler plans to open a 7,500-square-foot multi-use space in the Sunset Avenue parking garage by Fall 2020. The space will feature 50 gaming PCs, an area of gaming consoles, and room for technology-infused corporate trainings and events or youth STEM and esports camps. An area much larger than the one in Atherton, the facility will also have broadcasting production capabilities for live events such as podcasts or esports competitions, a coworking space, a cafe, and a small office space available for lease to support new ventures.

President of Butler Esports Luke Renchick was first under the impression the club was only getting the space in Atherton Union, and the other space would be something they get further down the line.

“As the semester went on, it looked less and less likely that we were going to get the parking garage facility space just by the conversations we’ve had with administrations and our director of esports,” Renchick said. “But yesterday [Oct. 24], they kind of just dropped the bomb on us that it was being fully supported by the university. It was awesome.”

According to Butler’s press release, the two new spaces aims to integrate esports technology into the academic curriculum and give students potential job opportunities.

Ryan Rogers, assistant professor of creative media and entertainment, also recently published a book about esports, “Understanding Esports: An Introduction to the Global Phenomenon.” In the book, he explains the significance and the accelerated growth in the esports industry over the years.

“Many faculty, myself included, feel that games are a fruitful area for exploration across multiple disciplines,” Rogers said in an email to The Butler Collegian. “It is important for us as faculty to prepare our students for the future, including gaming technology, and this space should help us do so.”

Jack Glynn, vice president of Butler Esports and junior Butler student, began playing esports at 14 years old after a career ending injury stopped him from pursuing a collegiate career in soccer. His parents discouraged him when he started playing esports initially.

“The industry is going to be a $2 billion industry by 2022,” Glynn said. “My parents are extremely supportive of it now that they see the money that’s going into. The possible growth to continue growing is exponential. The growth is crazy.”

How it all started

When Rogers came to Butler in 2017, he knew he wanted to start an esports team and teach an esports class.

Kirkpatrick was one of the few people who came to the first callout meeting Rogers and George held. He has the same position then in 2017 that he has now, the vice president of public relations.

“Initially, it was just something that seemed intriguing…I didn’t really have any experience in the field,” Kirkpatrick said. “I didn’t follow very many esports on my own. It sounded interesting enough and so now, I’m just hanging with it just because of all the investments I put into it. It’s really cool to watch all the developments as they keep going.”

Not long after, the Big East reached out to Butler about starting an esports club.

The Butler Esports club went from not existing at the start of the 2017-18 school year to being recognized as a club sport on Oct. 7.

The space in the parking garage will be open to the surrounding community as well — and Butler hopes those aged K-12 will be particularly interested — where they can come together and enjoy competitive gaming.

“From my experience, video games, in general, help bring people together across nations,” Glynn said. “You’re able to communicate whether it’s through the game or Discord, or something like that. So, I think the Indianapolis community will benefit from this a lot because it’ll be a center for gaming and it’s the first place in Indianapolis to have that. So it’ll bring a lot of people from all different backgrounds across Indianapolis together that are interested in one thing.”