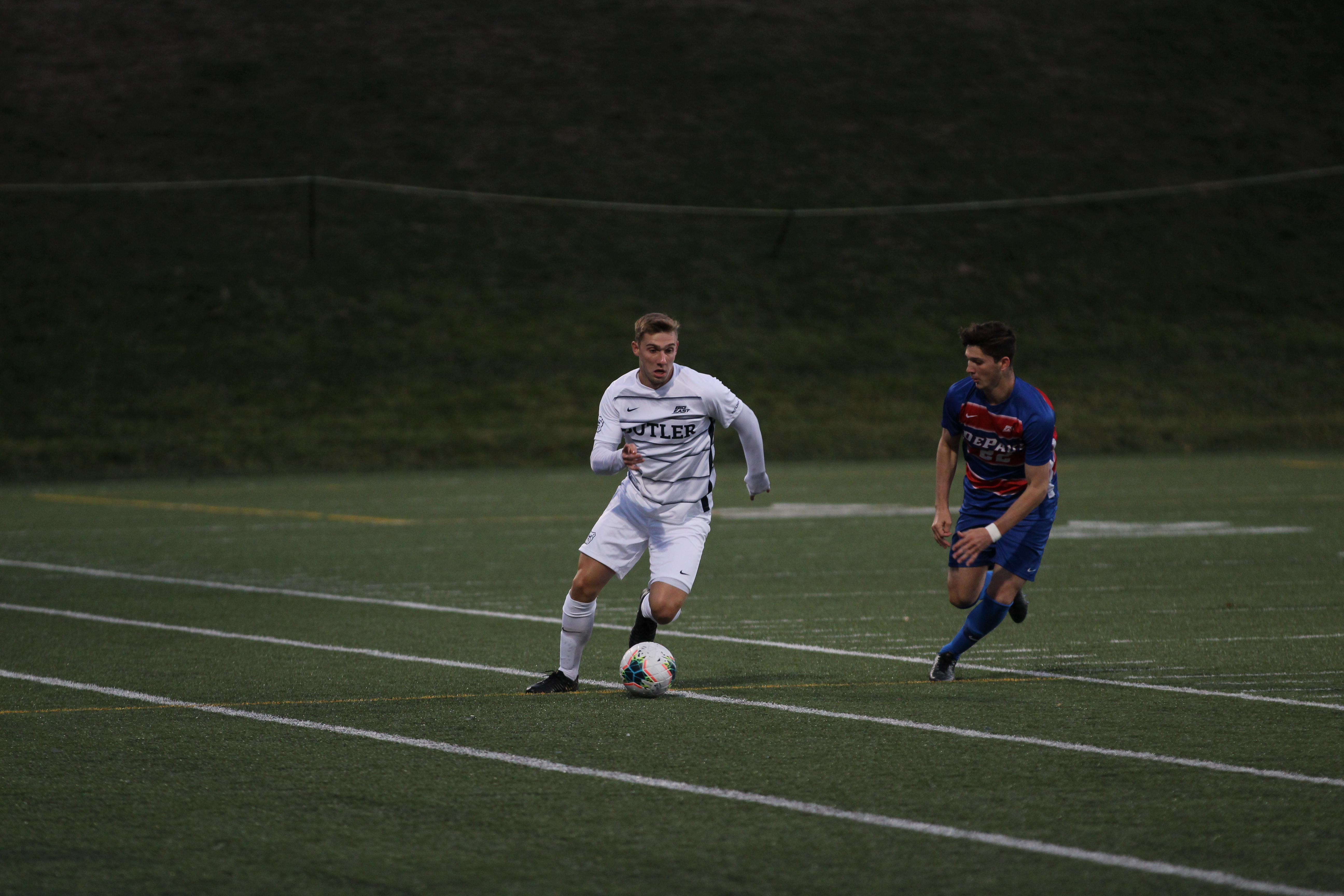 Jared Timmer makes a move against DePaul in a game this season. Timmer and the Bulldogs face Xavier on Nov. 6 in their final regular season game. Photo by Chandler Hart.

Men’s soccer is returning to the Sellick Bowl for their last game of the regular season. Butler will host Xavier before the start of the Big East tournament. The Bulldogs lost in double overtime to Creighton making them 3-4-1 in conference. Xavier is now 3-5 in conference after a 1-2 loss to Providence. Butler is tied for fifth place with Seton Hall at ten points going into this week. The Bulldogs lost to the Musketeers 3-5 last season. Kickoff is at 2:00 p.m and the game will also be available on BEDN.

Men’s basketball finished their exhibition games 2-0 and will move onto regular season play. They will host IUPUI in the first nonconference matchup of the season. IUPUI also won their exhibition game against Tiffin. IUPUI is in the Horizon league and finished their season 16-17 last year. Tip-off is at 6:30 p.m. in Hinkle Fieldhouse and you can also watch the game on FS2.

Women’s swim will drive down the road to the University of Indianapolis for their invitational. The invitational features  UIndy, Butler, Bellarmine and Lewis. The Bulldogs finished fourth out of eleven teams in the annual Indiana intercollegiate hosted by Purdue. The event will start at 5:00 p.m.

Volleyball will take on Seton Hall who they beat 3-0 earlier this season. The Bulldogs are 7-5 in Big East play after losing to Marquette 0-3. Seton Hall is 2-10 in Big East play and on a seven match losing streak. First set will start at 7:00 p.m. and will be available on BEDN.

Women’s swim will finish at day two of the University of Indianapolis Invitational.

Men’s soccer will wait to find out who they will face, when, and where once Wednesday’s games finish up. The Big East tournament games will be available on BEDN.

Football will return home after a 27-37 loss to Marist. They will host Davidson for Butler’s family weekend. The Bulldogs lost to the wildcats 38-41 last season. Butler is now 1-4 in conference as Davidson is now 3-2. Kickoff at the Sellick Bowl is at 12:00 p.m. All the action will be available on YouTube.

Women’s basketball will also start the regular season after winning their exhibition game against University of Indianapolis 70-46. The Bulldogs will host the Wagner Seahawks. The Seahawks will face the University of Maryland before taking on Butler. Wagner is in the Northeast Conference and finished 10-20 last season. Tip-off at Hinkle is at  12:00 p.m.

Men’s basketball will host New Orleans at Hinkle Fieldhouse for family weekend. The Privateers will face Spring Hill before taking on the Bulldogs. Tip-off is at 7:00 p.m. and you can catch the game on FSN.

Volleyball will next travel to Queens, New York to take on St. Johns. TheRed Storm is also 7-5 in conference and will face Xavier before taking on Butler. The Bulldogs beat the Red Storm 3-1 earlier this season. The first set will start at 12:00 p.m.