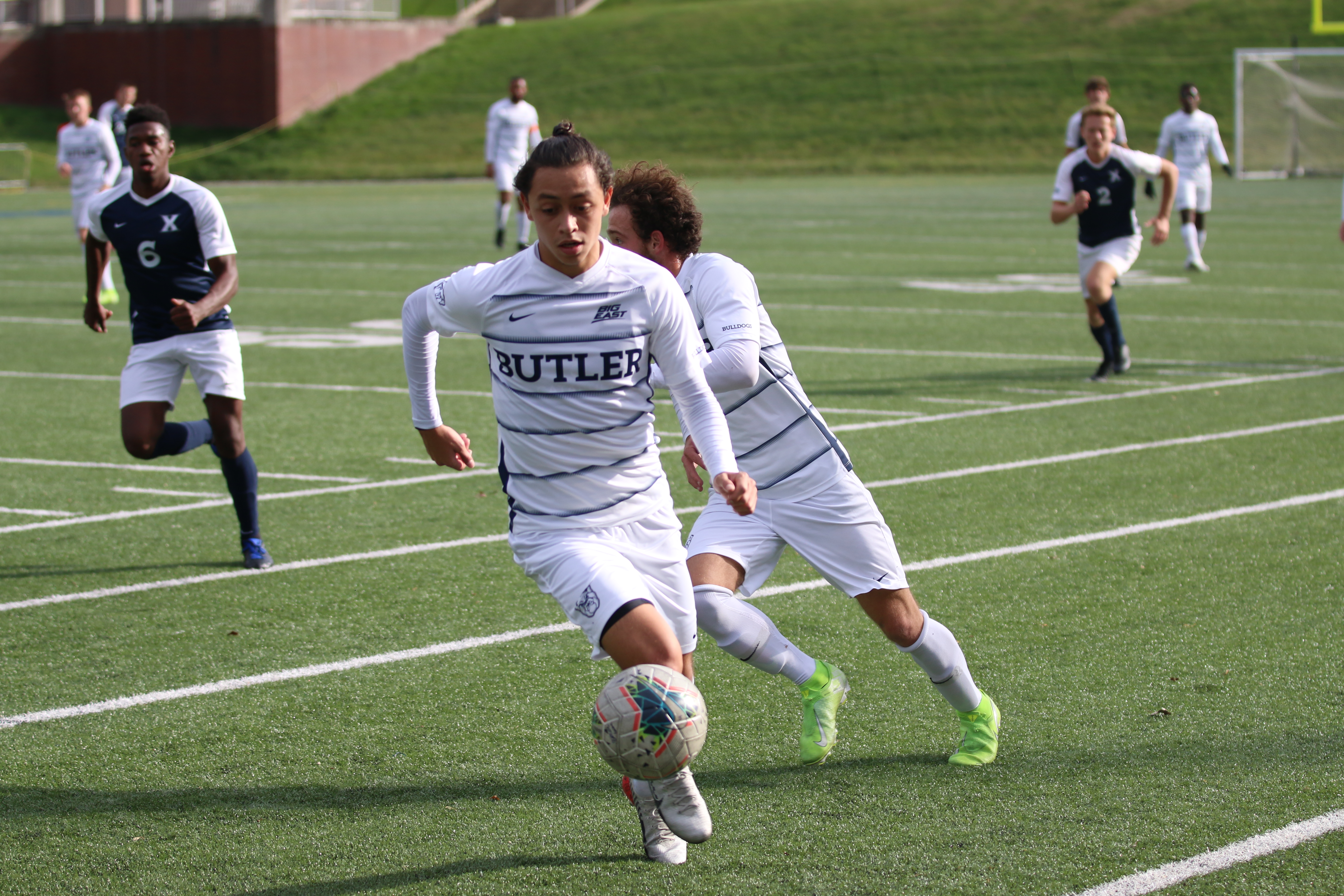 Wilmer Cabrera Jr. makes a move against Xavier in a game this season. Cabrera scored the game-winning goal in the Big East quarterfinal. Photo by Xan Korman.

Men’s basketball will remain at Hinkle Fieldhouse as they host Minnesota as part of the Gavitt Games. Butler is off to a strong start as they are 2-0 after a 79-53 victory over New Orleans. Minnesota moves to 1-1 after losing to Oklahoma 62-71. Tipoff will be at 8:30 p.m. and be covered on FS1.

Men’s soccer advances to the Big East semifinals after a tight 1-0 victory at Creighton. Butler lost to Georgetown 0-3 earlier this season. The Bulldogs are 11-6-1 overall this season and 4-4-1 in Big East play. The Hoyas finished first in the regular season finishing 7-0-2 in conference play. Kickoff will be at 1 p.m. and be available on BEDN.

Women’s basketball is off to a 1-0 start after a 74-58 win over Wagner. Butler will host Detroit Mercy in another non-conference matchup. Detroit Mercy is now 0-2 after losing to Loyola and Michigan State. Tipoff is at 7 p.m. and the game will be available on YouTube.

Nine regionals will be taking place on Friday as teams race to make it to the NCAA Championships. The University of Wisconsin is hosting the men’s and women’s Great Lakes Regional. The race will take place at the Zimmer Championship Cross Country Course. The women’s 6-kilometer race will start at 12:30 p.m. followed by the men’s 10-kilometer race at 1:30 p.m.

Volleyball is now 8-6 in conference after a 0-3 loss to St. John’s. The Bulldogs will return to Hinkle for the weekend and take on Providence first. Providence is 1-13 in Big East play with their one win coming against Seton Hall. Butler beat Providence 3-1 earlier this season. The match will start at 6 p.m. and will be available on YouTube.

Football will host Valparaiso for Senior Day and the battle for the Hoosier Helmet. The Bulldogs are now 1-5 in conference as well as Valparaiso. Butler lost to Valparaiso last season 17-35. Kickoff is at 12 p.m. but you can also support the bulldogs and watch the game on YouTube.

Men’s basketball will play their second game of the week as they take on Wofford. Wofford is also 2-0 but will face The College of William & Mary before facing Butler. Tipoff in Hinkle Fieldhouse will be at 8 p.m. All the action can be watched on FS2.

Wednesday’s semifinal game will determine if the Bulldogs advance to the championship game. If Butler wins on Tuesday, defeating Georgetown, they will face Providence or St. John’s. Kickoff will be at 12 p.m. and the game will be available on FS2.

Volleyball will have their second game of the weekend at home. They will take on Creighton who is 13-1 in conference. Their one loss was a 0-3 loss to Villanova. Creighton beat Butler 3-0 earlier this season. 11 out of 14 of Creighton’s Big East games have been 3-0 sweeps. They will face Xavier before traveling to Hinkle Fieldhouse. First serve is set for 1 p.m and the game can be caught on YouTube.