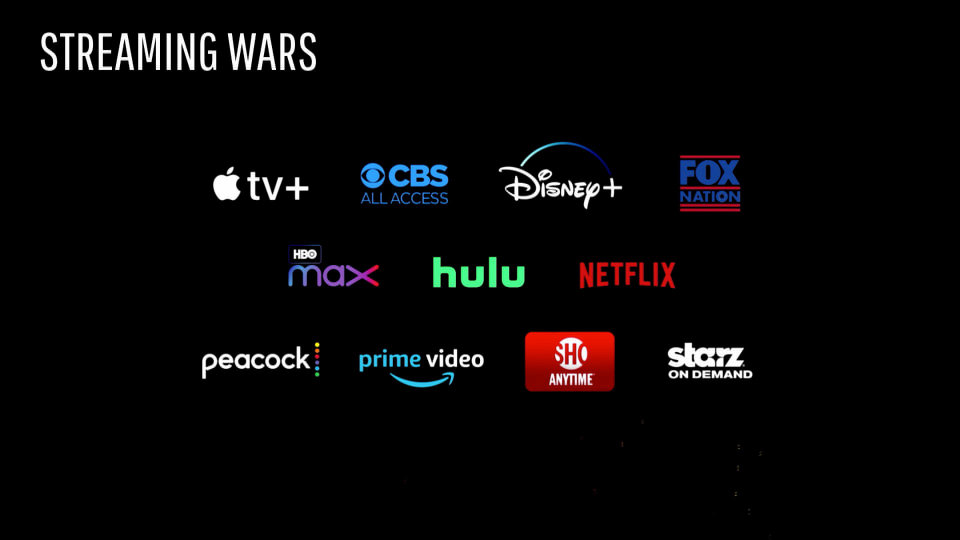 As someone who’s involved within the broadcast spectrum, I enjoy analyzing trends of the industry and distinguishing what renders a service a failure or success. Whether it’s broadcasts, videos or TV, I like to see what interests people and what keeps them coming back for more.

When I’m not on-air doing sports commentary or anchoring, or behind a computer editing the Butler Collegian Newscast, you’ll often find me watching different forms of visual media. I can spend hours on sites like YouTube browsing everything from David Dobrik vlogs to those satisfying slime videos that are seemingly everywhere now.

In an era so involved with digital media, the video side of it is constantly evolving. More recently, the realm of stream services has expanded so immensely that many people don’t know which to subscribe to, or whether to just buy all of them. The market isn’t solely dominated by Netflix anymore, and with the recent launches of Disney+ and Apple TV+ it can be overwhelming with so many options.

Here, I’ll break down what you’re getting with each subscription, for what price and how that service is expected to grow with time. For each, I’ll give my thoughts on whether it’s worth your time and money.

Simply put, Disney owns A LOT. I feel like we all know this, but you can’t really grasp it until you look into all that Disney+ has to offer. There’s no shortage of content here. With the acquisition of 21st Century Fox in March 2019, Disney has added dozens of shows and movies to its repertoire. If you have 202 hours of free time to kill, you can even binge watch the first 30 seasons of “The Simpsons.” With Christmas on the horizon, there’s few better films to watch here than “Home Alone.”

As expected, this service has something for all those who love Disney and its partners. Looking to relive the days of watching “That’s So Raven?” They’ve got you covered. Miss out on the days of “Darkwing Duck?” “Let’s get dangerous” and watch 25 episodes worth.

As if that wasn’t enough already, Disney has released some exclusively produced shows to its service. The Star Wars based series “The Mandalorian” was a huge attraction to the service, and it hasn’t disappointed fans. “The Life According to Jeff Goldblum” is a comedy series that can easily attract older audiences. To please all Wildcats fans out there, Disney created the cleverly titled “High School Musical: The Musical: The Series”.

Disney+ is a carefully designed site that rivals the top streaming services that have been around for years. Disney understands every fan has their niche, whether it’s princesses, superheroes or talking animals. To cater to nearly every group, they currently have a two-year plan of shows and films that will release on specific dates to keep subscribers coming back for more.

With so much to offer, the user interface is simple to use and can be broken up into categories based on genre, producer, and much more. Users will discover films they’ve never even heard of. The content hits all the marks for what consumers look for in a streaming service. If that still isn’t enough for you, I might suggest upgrading to the $12.99/month bundle of Disney+, Hulu and ESPN+.

Trust me, Disney+ is a must have.

You likely own their phone, their laptop and their earbuds. So why not get their streaming service, right? Well, I’m here to say that you might want to hold off on it for a while. At first glance, Apple TV+ looks how most Apple products do when first unveiled — sleek, innovative and cool. But for me, it doesn’t quite hit the mark of what’s valued in a streaming service today.

The platform seems as though it was launched prematurely as an attempt for Apple to get their feet wet in the streaming industry. The user experience lacks some small features that we as subscribers like to see, such as auto-play and previews. Usage only through its app and website prevents Windows or Android tech users access to the service.

Apple has attempted to build hype for the service through its exclusive shows by using celebrity appearances from Jennifer Aniston, Oprah Winfrey and Steven Spielberg. I’ll admit, the cinematography for these shows looks fantastic, but some critics’ reviews point to lazy writing in the scripts.

The lack of licensed content is detrimental to the service. However, this isn’t to say this couldn’t change in the future. While the service might be sub-par now, Apple TV+ has sights set on adding content over time. Newer films including “Hala” and “The Banker” starring Samuel L. Jackson will be released before the end of 2019, and more are in development.

With the lack of content at launch, Apple has kept the pricing low and added benefits for those who are loyal to the brand. If you’ve recently bought a new iPhone, iPad, Apple TV or Mac, you get one year of Apple TV+ for free.

Despite the deal that might be seen on the pricetag, I can’t justify $60/year on a service that hardly has any content. In time, as the library is expanded to include a few particular shows that could capture my interest, then perhaps I’d check it out. Until then though, I’m keeping my distance.

It’s hard to fathom just how quickly this company went from a DVD distributor to dominating the streaming market and almost single handedly putting video stores out of business — with a little help from Redbox. What makes Netflix so appealing, though, is it still has a similar experience to going through a video store.

With their expansive selection of films and shows, users can browse through genres and related content the same way you’d walk the aisles at Blockbuster before they exited the market. Netflix set the standard for what online streaming should be like, and it hasn’t faded in the slightest.

There’s loads of content for all age groups and niche fanbases, not to mention the accessibility on several platforms. There’s little to hate about the service. It will be disappointing when fan-favorite shows like “Friends” leave and “The Office” moves over to Peacock, NBCUniversal’s new streaming platform, in 2020. To make up for it, Netflix has plenty of new original content lined up for the future.

With hits like “Stranger Things,” “Mindhunter” and “Big Mouth,” the service continues to generate creative, unique shows and films. Users will be pleased to know that this won’t change. December 2019 will debut “The Witcher,” which is Netflix’s answer to “Game of Thrones.” This should attract fans following the disappointing season 8 conclusion of the HBO hit.

Every so often, we as users get news that Netflix is raising its prices again, but for the massive catalog they have for content, the price you pay is still affordable regardless of whether you choose the basic or premium plan. It’s important to understand that while there is now more competition in the streaming industry, it ensures that the price stays low and the content quality stays high.

Netflix may be the oldest of the bunch, but it serves as the benchmark to what all new services should model themselves off of. They’ve even signed a multi-year partnership with Nickelodeon that will create new series and films that expand upon childhood favorites. Even with new competitors, Netflix is still worth every penny.

Yes, Amazon delivers, but I’m talking about more than just boxes and envelopes. A pleasant bonus to Amazon Prime, the video extension offers a variety of shows and movies for all audiences. While they might not be the first choice for film distributors to share their blockbuster movies, it’s a great place to go back and catch some of your older favorites when you get the itch to rewatch something.

If you feel the sudden urge to watch “Iron Man 2,” “The Secret Life of Walter Mitty” or “21,” then Prime Video has got you covered. However, the lack of popular recent releases raises some concern for how they’ll compete with the services who have larger libraries.

The layout of the site is nicely done, with rows of videos broken up into genres, popular releases and recent additions. I particularly like how there are simplified pages that separate kids content from content geared toward older audiences. Still, it’s another site that lacks subtle features like previews that appeal to users.

Having said this, Prime Video does have something called “X-ray,” which is a tab that can be clicked in the corner of a movie/show that opens an IMDb page that includes scene selection, character profiles, cast lists and even trivia if available for that particular film/show. When active, X-ray displays characters and actors who are in each scene as they play. It might not have much functionality, but it’s an added bonus for those who might be watching as fans of a particular actor or actress.

Additionally, the service has had its fair share of successful original shows. Series like “The Man in the High Castle,” “Tom Clancy’s: Jack Ryan” and “The Grand Tour,” each have their own individual appeal. In addition, they have a variety of different original films that cover everything from comedy specials to nature documentaries.

I don’t think Amazon Prime Video is the first option for most people when they look for a streaming service. Their movie collection, I feel, lacks more expansive forms of content and isn’t current with what modern audiences are seeking. They make up for it in their original content that true fans will appreciate and will return to consistently.

Should they update their films and diversify the nature of the shows they offer, then Prime Video could easily join the top competitors in the stream wars. As of now, however, it remains but a side-benefit to the monthly/annual fee of Amazon Prime delivery.