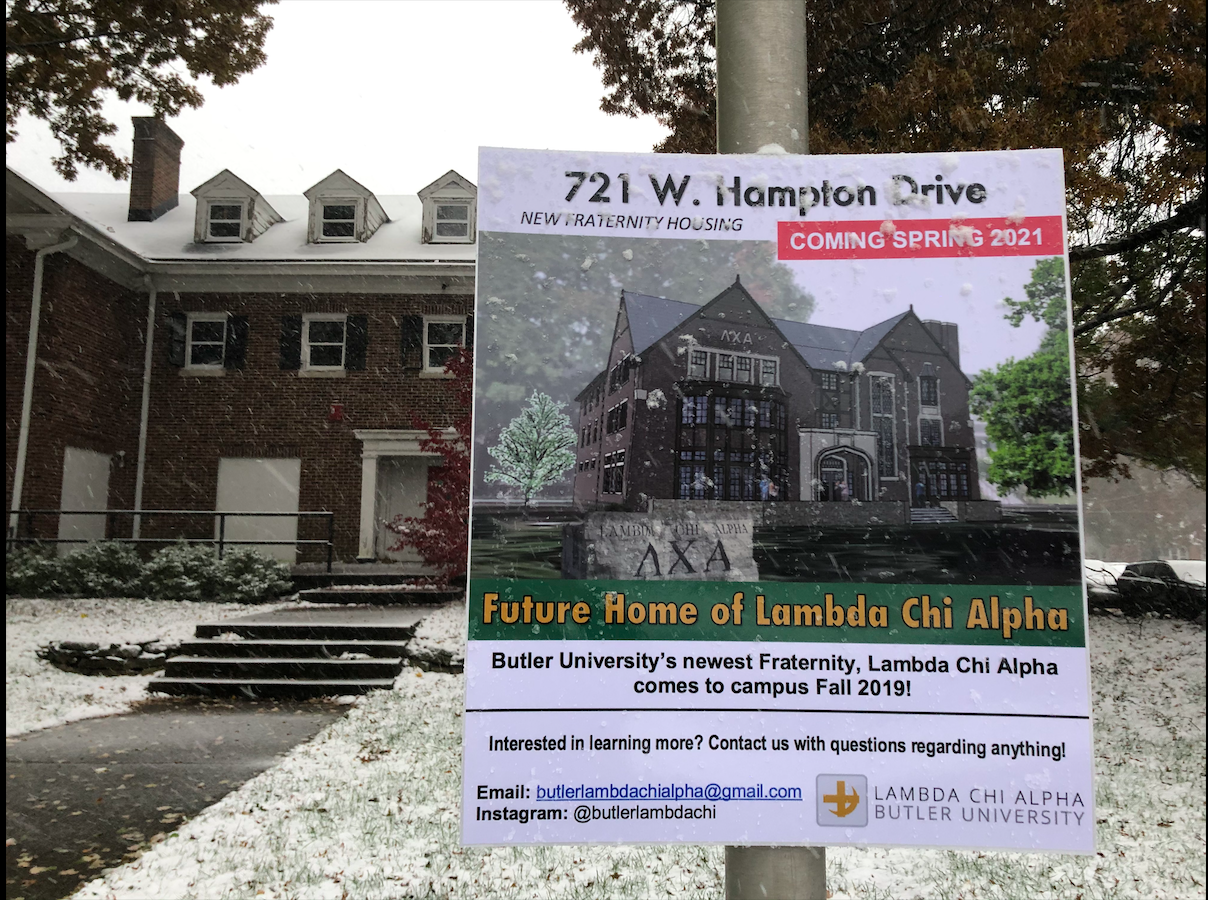 Construction on the new Lambda Chi Alpha house will begin in February 2020. Photo by Jessica Lee.

Due to delays in obtaining some permits and variances, construction on the new Lambda Chi Alpha house will not start this November as anticipated, but in February 2020.

Kent Rollison, landlord and treasurer of Lambda Chi Alpha’s house corporation, said the process of getting approval, along with the architects’ and engineers’ designs, has taken longer than they had hoped.

Variances are needed from the city of Indianapolis to deviate from standard zoning regulations, such as the height and width of the building.

They are hoping to get approval by Feb. 10, Rollison said, and their plans should be approved because the surrounding buildings are “in the same boat.”

“There’s no way to shortcut the process,” Rollison said.

Once construction begins, students will not be able to access the B permit parking lot behind the former Tau Kappa Epsilon fraternity house. Instead, those parking spaces will be relocated to Butler University’s recently gained property: Lambda Chi Alpha’s former lot on Sunset Avenue.

“It’ll be interesting to see how it affects my day to day,” O’Loughlin said. “I don’t think it’ll disrupt it too much.”

Bruce Arick, vice president for finance and administration, said both parking lots have about the same amount of spaces.

Students, especially those with B permits, will be notified in advance of the construction start date.

“Everytime I think I have a date, it just gets pushed back so it’s kind of up in the air,” Arick said.

There are no plans yet for the property on Sunset Avenue, but Arick said the university will look at the parking then and make adjustments accordingly.

As for parking on the new Lambda Chi Alpha property, the fraternity will be sharing a one-way driveway with Alpha Chi Omega, the sorority next door. Beta Lane, the street connecting West Hampton Drive and 44th Street, will be vacated, which has already been approved by the city and paid for by the university.

Noah Ditzler, a sophomore marking major, is a founding father of Lambda Chi Alpha. Ditzler said he is excited for the new house but they are focused on recruiting right now.

“It’s almost an advantage that we won’t have a house right off the bat,” Ditzler said. “I think it will allow us to recruit people who are more interested in joining for the right reasons. If their interest is completely contingent on whether or not we have a physical location, to me it’s kind of like, ‘are you looking for a different experience than what we want to provide?’”

Butler announced Lambda Chi Alpha’s early return in August. The fraternity associated the first group of 15 founding fathers on Nov. 10 and will be joining formal recruitment at the start of the second semester.