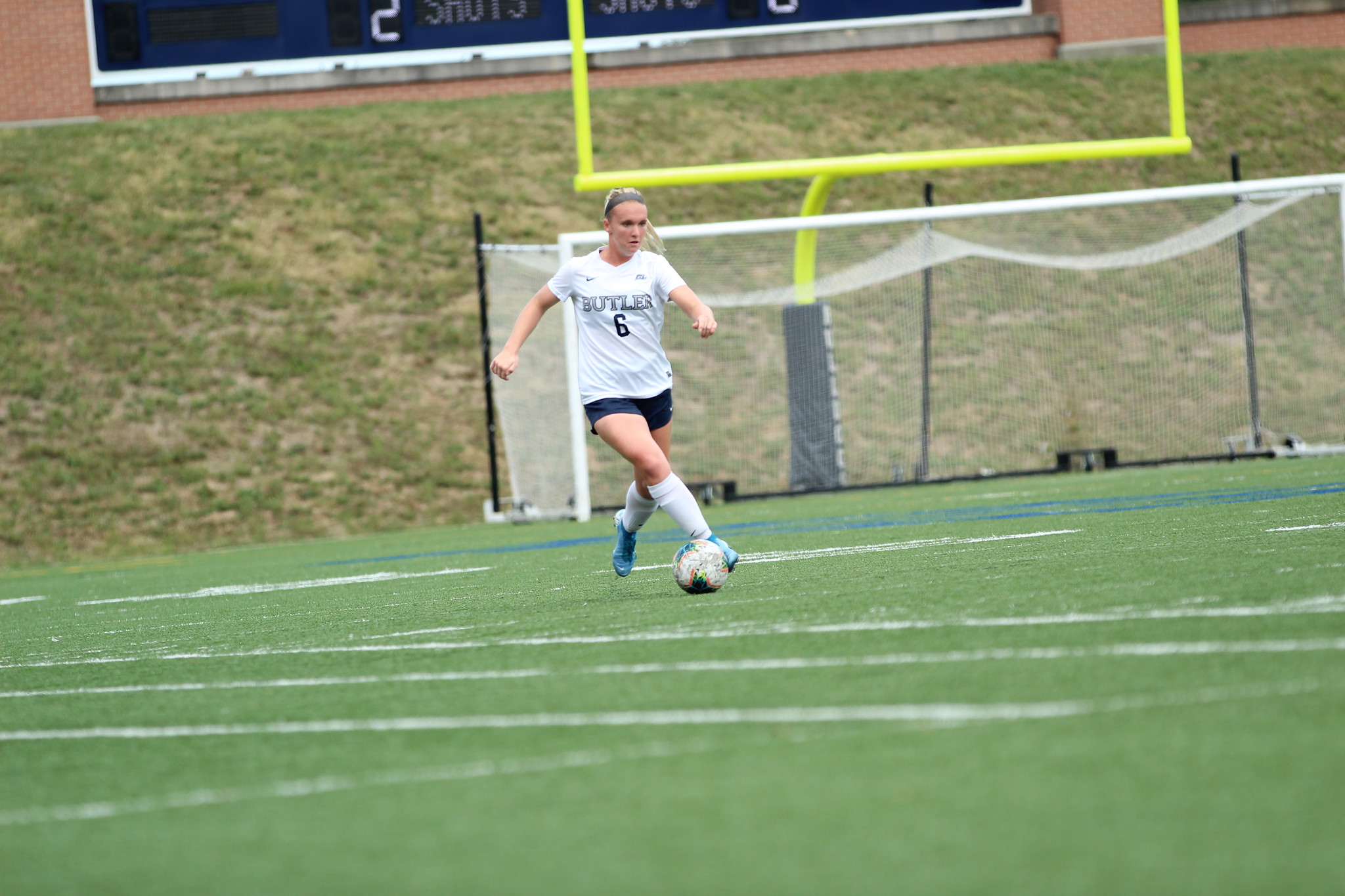 Julia Leonard dribbles down the field. Leonard filled in at center back for the injured Annika Schmidt in Butler’s loss to Xavier

The Butler women’s soccer team fell 2-0 to Xavier on Oct. 31 to move to 10-5-2. The loss snapped a 9-game unbeaten streak for Butler against Xavier. It also gave the Musketeers their first-ever Big East regular season championship. Here’s what we learned:

Xavier busted out of the gate and Butler was never able to recover. The Musketeers looked like a team hungry for a Big East championship as they dominated Butler in the attacking end.

The first five minutes of the match were controlled solely by Xavier. They capitalized as Carrie Lewis scored off a deflected cross in the box.

The Musketeers have been one of the most offensively direct teams in the Big East this season and they lived up to that in the win over Butler. Xavier set the tone offensively and never let Butler get too comfortable in their attacking end.

Possession percentage, at least in the first half, was close when compared, but the Musketeers were able to generate substantially more looks on the net than the Bulldogs.

Xavier outshot Butler 18-7 and generated more corner kicks than Butler by a 5-1 margin.

If not for a few close saves from Butler goalkeeper Stephanie Rodriguez, the lead might have been bigger for Xavier.

Butler allowed the early goal and spent the final 87 minutes chasing the Musketeers. It was one of Butler’s worst matches of the season for offensive statistics.

It was the first shutout-loss of the 2019 season for Butler as they struggled to find consistent offensive pressure at moments in the match. The Bulldogs were held to their lowest shot on goal output this season (2) in the loss to the Musketeers.

Their leading scorers, Anja Savich and Katie Soderstrom, were both held without a shot the entire match. Butler, who has been dangerous this season off set pieces, had just one corner kick in the match.

When Butler had opportunities, they rarely resulted in a clean look on the net. The Xavier defense would swarm to block or deflect any look the Bulldogs had. The Xavier back line, led by Grace Bahr, was suffocating in the Bulldogs’ end.

The Musketeers did a tremendous job of stopping Butler’s attack.

The Bulldogs lost to the Musketeers on Thursday but the biggest loss may be an injury to Soderstrom. The sophomore went down with a non-contact injury during the second half and didn’t return to the match.

Soderstrom fell to the ground and immediately grabbed her leg. She would limp off the field on her own power. The status of her injury is ‘unknown’.

Soderstrom is the second of Butler’s key cogs to go down with an injury after All-Big East defender Annika Schmidt sat out the match with a high ankle sprain.

Schmidt is out for the ‘foreseeable future’.

Butler could be missing two starters as it heads to the Big East Championship. The Bulldogs will have to win three games if they want to extend their season into the NCAA Tournament.