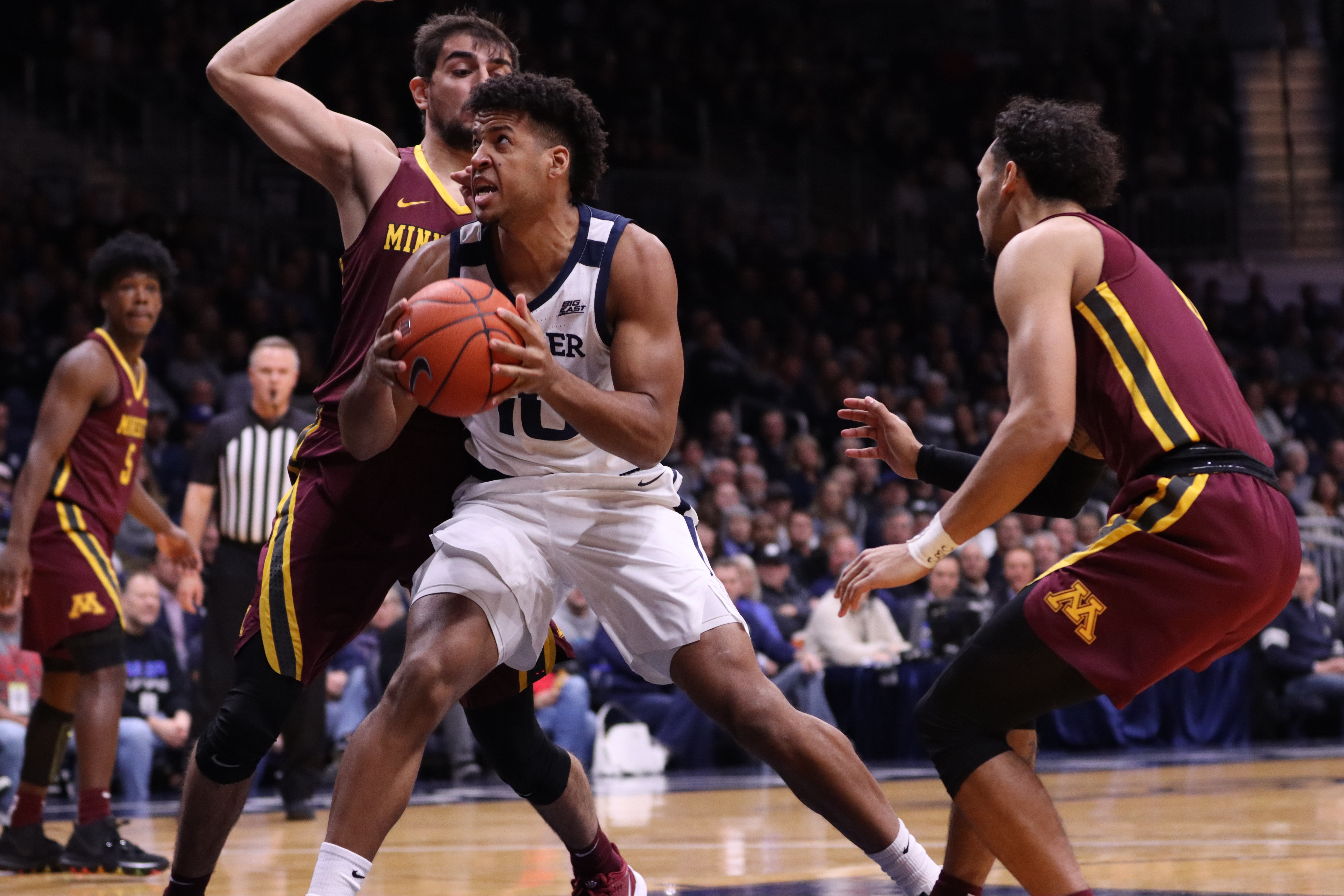 Bryce Nze makes a move in the post against Minnesota this season. Nze is averaging 13.3 points and 9.7 rebounds this season. Photo by Chandler Hart / Butler Collegian

Coming off a win in the Gavitt Games against Minnesota, the Butler men’s basketball team welcomes the Wofford Terriers to Hinkle Fieldhouse. The Terriers are coming off a one-point loss to the College of William & Mary. Here is everything you need to know.

Who: Butler vs. Wofford

1. This is not the same Wofford team that almost beat Kentucky last season in the round of 32, but that doesn’t mean they aren’t dangerous.

There are three very important pieces from the Wofford team that won its first NCAA tournament game in program history and almost beat Kentucky in the second round last year that won’t be returning this season. The first is former head coach Mike Young. Young won 299 games in 17 seasons at the Terriers head coach turning the program into a powerhouse in the Southern Conference and captured the conference’s coach of the year award on four separate occasions — 2010, 2014, 2015 and 2019. The other two pieces are graduated seniors Fletcher McGee and Jackson Cameron. Last season, McGee and Cameron combined for 35 points per game. McGee made 158 three pointers as a senior and finished his career as the NCAA all-time 3-point field goal leader at 509. Meanwhile, Cameron averaged almost eight rebounds to accompany his 14.5 points per game. That team went 30-5 and was a perfect 18-0 in Southern Conference play in 2018-19.

With that being said, the Terriers return three of their next four scorers from last season led by backcourt duo Storm Murphy and Nathan Hoover. After averaging 21 per game combined last year, Murphy and Hoover are both averaging 17 points per game early this season. Murphy, in particular, is doing it at an incredibly efficient rate shooting 54% from the field and 62.5% from beyond the arc. Behind them comes five other players averaging at least seven points per game. The Terriers might look different with a new focus offensively, but they are still a dangerous team.

2. Butler is going to get its first challenge from the 3-point line this season.

Through three games, Butler has yet to face a team that is especially dangerous from beyond the arc, and they have defended that line well — give credit to Butler’s defense over the first three games. However, this Wofford team presents a different threat from the 3-point line. Minnesota is the best 3-point shooting team that the Bulldogs have played and they sit at 164th in the country in that category; Wofford sits in 22nd in that category and has taken more threes than any other team in the top 25. They are going to shoot and make a lot of three pointers. Butler’s 3-point defense has been solid this season — teams are shooting just 25.5% against Butler — but they’ve also had the luxury of not playing a great three point shooting team yet. That ends on Saturday when the Terriers bring in five guys shooting 37% or better from deep.

3. Run the offense through the bigs and dominate the glass, Butler has a massive advantage inside.

Arguably, the player the Terriers miss the most so far this season is Jackson Cameron. As mentioned, he grabbed almost eight rebounds per game a year ago. This season, the Terriers are 350th — out of 353 Division 1 teams — in rebounds per game. They only have one player averaging more than four so far this season and nobody has more than 16 rebounds total so far. To put it in perspective, three Bulldogs have more than 16 boards and Bryce Nze has 29 through three games. Nze, in particular, should dominate this game on both ends of the floor. No player with meaningful minutes for Wofford is taller than 6 foot, 9 inches. Butler should not only dominate the glass on both ends, but Nze and Bryce Golden have shown back-to-the basket abilities. The Bulldogs should take full advantage of the substantial advantage down low and work out from there to get good shots from beyond the arc.