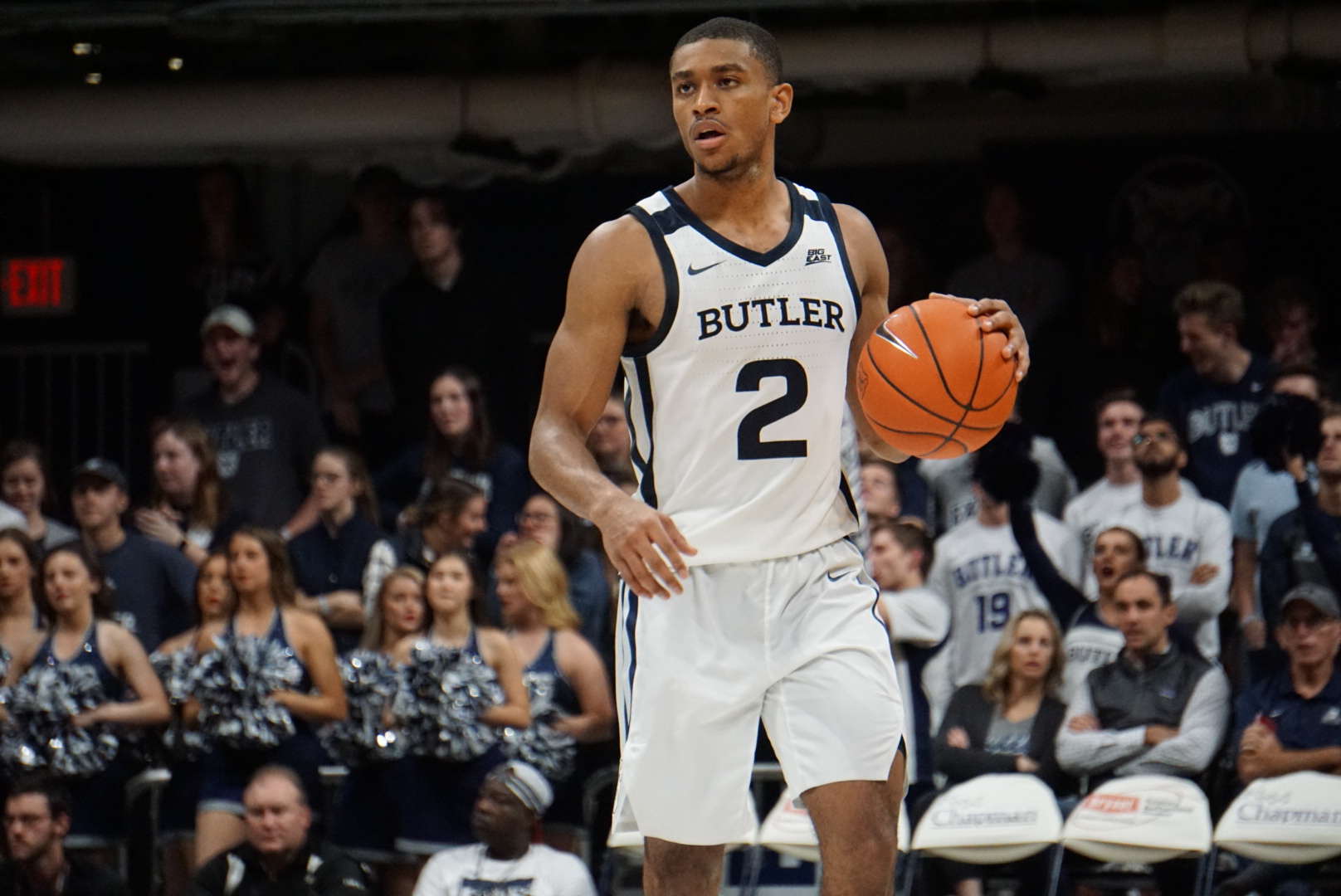 Aaron Thompson brings the ball down the court during Butler’s 80-47 win over IUPUI on Nov. 6. The Bulldogs will take on Minnesota at Hinkle Fieldhouse on Nov. 12. Becca Atchley / Collegian file photo.

After comfortable victories over IUPUI and New Orleans to open the season, the Butler men’s basketball team is back in action on Nov. 12 as the team hosts Minnesota. The Golden Gophers, who were picked to finish 11th in the Big Ten media preseason poll, are coming off a nine-point home loss to Oklahoma. Here’s what you need to know as Butler prepares for its first game against a power conference team this season:

Who: Butler vs. Minnesota

The Golden Gophers reached a high point in head coach Richard Pitino’s tenure last season, exceeding expectations with a 21-13 record and seventh-place Big Ten finish. The team earned a 10-seed in the NCAA Tournament and defeated Louisville in the first round for the team’s first tournament win since 2013.

This year’s Minnesota team, however, looks very different. The Gophers lost Amir Coffey – their leading scorer with 16.6 points per game – to the NBA, and Jordan Murphy – the No. 2 scorer in program history – and backcourt staple Dupree McBrayer to graduation. In all, more than two-thirds of the team’s total points from last season are gone. Tasked with making up for those losses is a team that includes seven new players, made up of four freshmen and three transfers.

Minnesota started its season with a 35-point win over Cleveland State but was then outscored by 15 in the second half against Oklahoma, falling 71-62 on Nov. 9. The Gophers are clearly still finding their way this year, and Butler mixing and matching lineups could help keep them off balance.

The Golden Gophers shot just 31.1% from deep last year, a mark outside of the top 300 nationally. That’s up to just shy of 35% through two games this season thanks in part to two transfers. Pittsburgh transfer Marcus Carr has knocked down roughly a third of his 3-point attempts thus far and appears in line to be one of the team’s top scorers this season. Meanwhile, Vanderbilt transfer Payton Willis is 9-of-20 from beyond the arc to begin his season.

Minnesota may still not be among the best 3-point-shooting teams, but limiting Carr and Willis from the perimeter could be key in Butler controlling the game. A failure to do so could lead to significant problems.

While Butler’s first two games were comfortable victories, the schedule gets more difficult for the Bulldogs in a hurry. With their toughest nonconference schedule in years, the team will have plenty of opportunities to pick up notable wins and build an impressive resume heading into Big East action.

A victory over Minnesota is step one on that front, but Butler will have to have to take that step without a fully healthy roster. On Monday, Butler head coach LaVall Jordan said that Kamar Baldwin (aggravated rib cartilage) is feeling better, but didn’t commit to him being in the starting lineup against Minnesota. Jordan also said that Christian David (illness) remains day-to-day, while Derrik Smits (knee), who hasn’t played during the regular season, has yet to participate in a full team practice.

With Smits apparently unavailable against Minnesota, keep an eye out for how Butler is able to guard Gophers 6-foot, 10-inch center Daniel Oturu, who’s third on the team in points per game. Coming off of two straight double-doubles to start the year, Bryce Nze figures to receive the bulk of that assignment in what could easily be his biggest test yet.