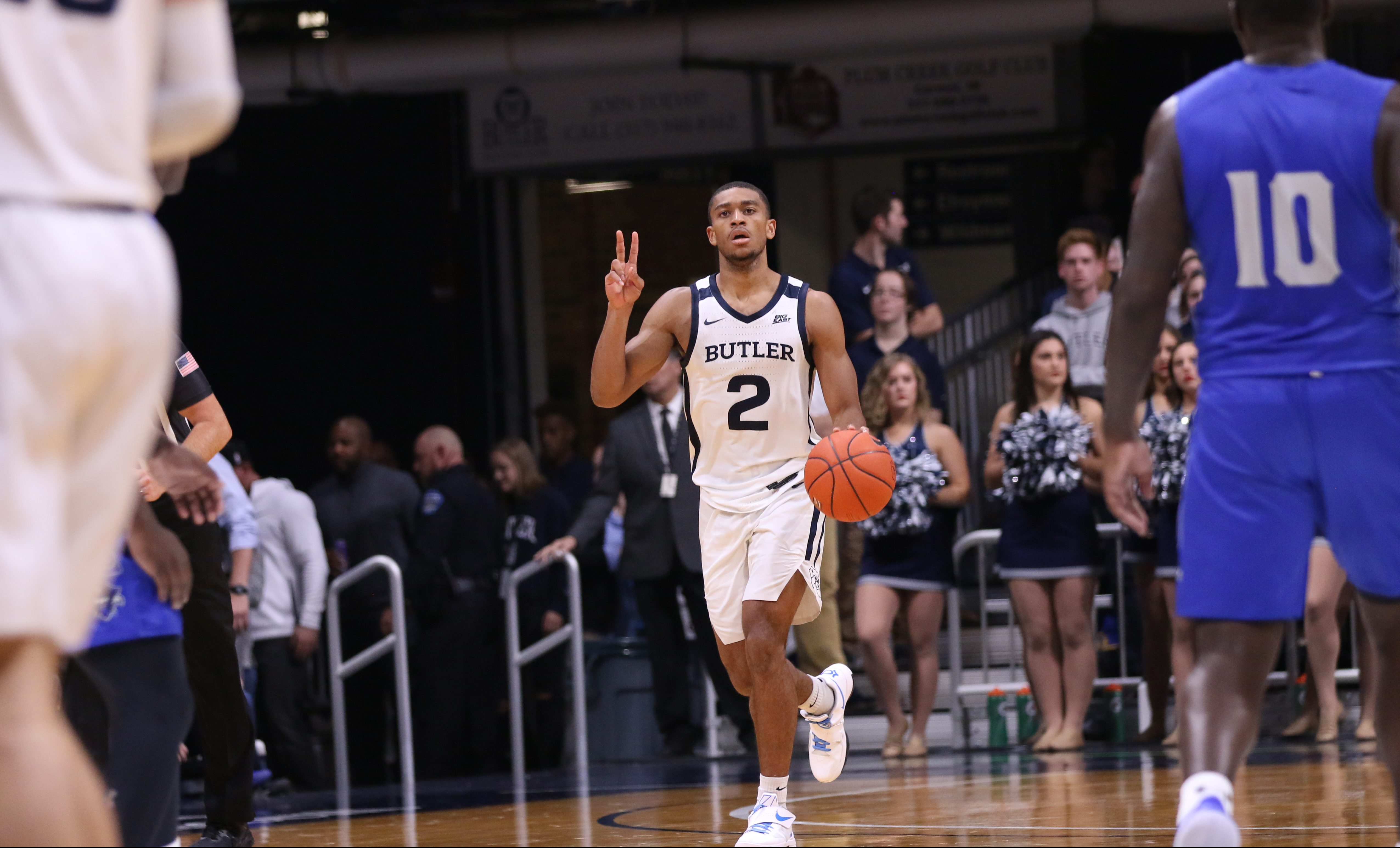 Behind four double-digit scorers, a slightly healthier Butler men’s basketball team defeated New Orleans 79-53 to move to 2-0 on the season. Bryce Nze led the Bulldogs with 18 points and 10 rebounds and Aaron Thompson finished with 12 points and 10 assists. We go beyond the box score of a controlling win.

1. Aaron Thompson was phenomenal on both ends of the floor.

Without Kamar Baldwin completely healthy for the second game in a row, Aaron Thompson took the reins to the Butler offense and controlled the pace the entire game. On the box score side of things, Thompson recorded the second double-double of his career posting 12 points and 10 assists. Once again, he did it with very few mistakes, turning the ball over once in a game where Butler only turned it over six times. Thompson controlled the pace for Butler and was elite on the defensive end as well. He spent most of the game guarding New Orleans’ Bryson Robinson who scored 22 points in the Privateers’ season opener. He had just 10 points tonight on 3-of-9 shooting. It was another efficient, controlling night for the junior guard.

Thompson showed some particular explosiveness on the offensive end against New Orleans recognizing his quickness. Nobody on the Privateers could stay in front of Thompson in the first half and the Glenn Dale native noticed it and got to the front of the rim at will. Not only was Thompson distributing at an elite level, he was taking advantage of a clear mismatch and was a main point of production for the Bulldogs in the first half. Year-by-year Thompson has gotten more and more comfortable on the offensive end and the trend continues in his third season. He got a lot of opportunities against New Orleans, and, more importantly, he took full advantage of the openings he got.

2. Bryce Nze was awesome, as well, and showed just how versatile he is.

If we are going to talk about one double-double, it is only fair we talk about the other one. Nze backed up a double-double in game one with a more convincing double-double in game two. The Milwaukee transfer was active on both ends of the floor. He recorded just as many offensive rebounds as defensive rebounds, five, and showed just how versatile he can be. On separate occasions, Nze took a rebound off the glass and pushed it up the floor, knocked down a three from the top of the key and forced a steal in the post.

Coming into this season, the expectation was Nze would be a consistent presence on the glass. Through two games, he has shown he can guard multiple positions, must be respected on the 3-point line and he has improved drastically at the charity stripe. Nze’s versatility adds a very important dimension on both ends of the floor.

3. We got a taste of just how much depth Butler can have.

Butler had a less than 100% Kamar Baldwin and was missing two potential starters in Christian David and Derrik Smits. But the Bulldogs showed a glimpse of just how deep they can be this season. With about 2.5 players missing, Butler still had nine players record more than 10 minutes and all nine of those players scored. Four players in double figures led the way, Bryce Nze scored 18 points along with his 10 rebounds, Jordan Tucker added 16 in his first game of the season and Sean McDermott contributed 13 along with Aaron Thompson’s 12 points. In theory, only two of those players are go-to scorers on the offensive end on a consistent basis, but Butler got major contributions elsewhere tonight.

Of course, it is never a good thing when players go down with injury or illness. But Butler’s situation against IUPUI allowed the Bulldogs to find just the kind of depth they have. Against New Orleans, it became clear that those contributions against the Jaguars weren’t one-hit-wonders. Bryce Golden was active again with five points and six boards. John-Michael Mulloy was active in his 11 minutes and Henry Baddley added seven points of his own. The full Butler puzzle wasn’t quite there tonight, but Butler has a chance to be very deep this season and we saw more of that tonight.

Jordan Tucker finished with 16 points on 6-of-14 shooting, and he did it within the offense. He continued to show a willingness to get to the front of the rim and when he knocked down his first three shots he didn’t go off on an unnecessary collection of heat checks. Tucker will never be incredibly efficient, but the way he operated within Butler’s offense was a promising sign. Where Tucker’s offensive tendencies get him in trouble is when he tries to operate outside of Butler’s game plan. Tonight he played within himself and the system and played a really solid 27 minutes.