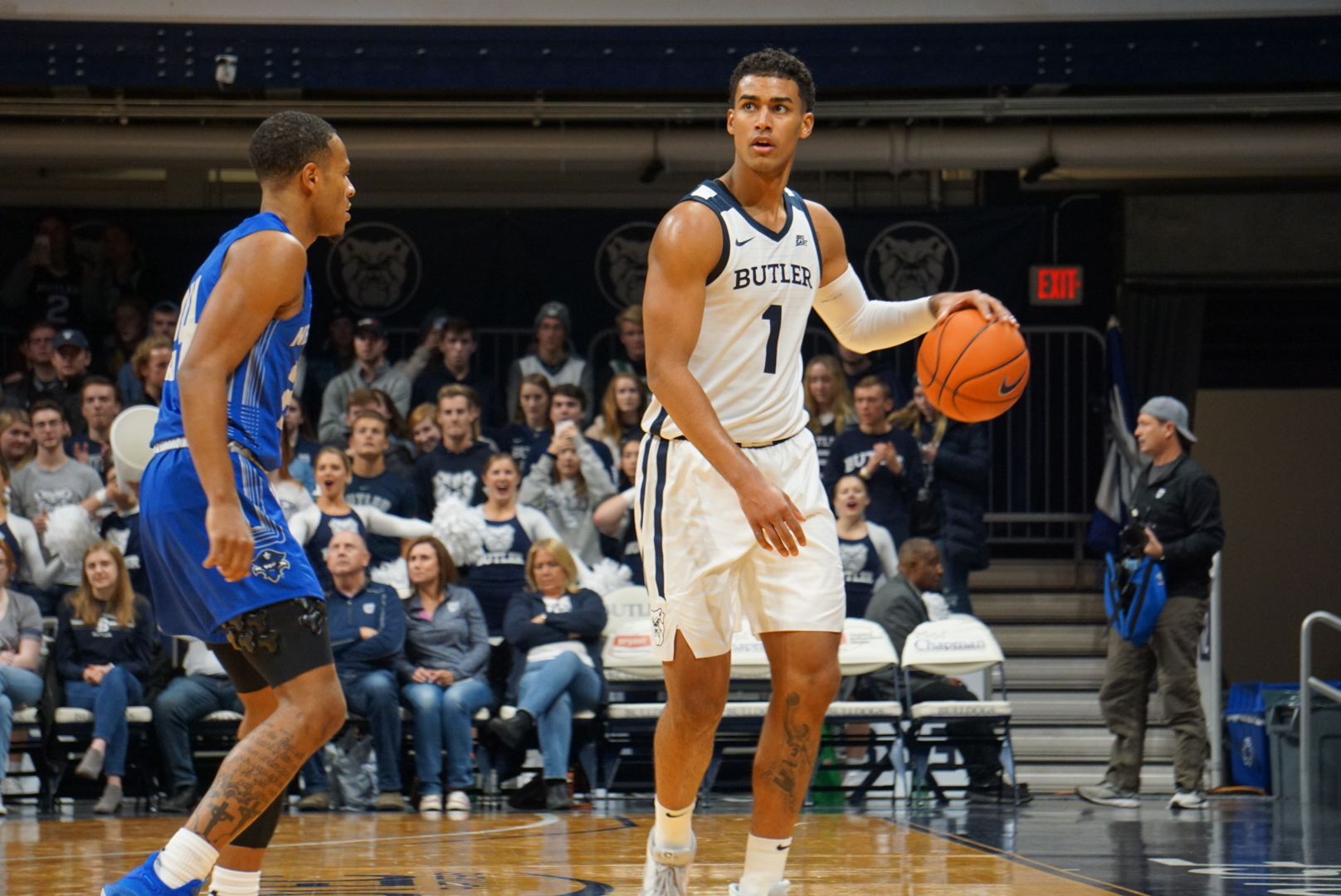 Jordan Tucker looks for an open move during Butler’s win over New Orleans on Nov. 9. Photo by Becca Atchley.

Four Butler players reached double figures and two tallied double-doubles as the Bulldogs soundly defeated New Orleans 79-53 on Nov. 9 at Hinkle Fieldhouse for their second straight win of the season. Here’s a look at some of the key news, stats, notes, and quotes from the victory:

Three of the seven players Butler was without for the majority of its season opener saw action against New Orleans. Kamar Baldwin (aggravated rib cartilage), Henry Baddley (illness) and Jordan Tucker (one-game NCAA suspension) combined for 27 points, nine rebounds and four assists against the Privateers. Tucker made without-a-doubt the largest impact of the three, tallying 16 points on 4-of-8 from beyond the arc.

Baldwin played 14 minutes against New Orleans, scoring just four points, but head coach LaVall Jordan said the senior felt better the more he played. “It was just kind of working out some kinks and him getting loose,” Jordan said. “It helped to be able to give Aaron [Thompson] a break.”

With tonight’s victory, Butler has now won 52 consecutive nonconference home contests. That mark is second-best in the nation, trailing only Duke.

Aaron Thompson posted a double-double for just the second time in his college career. The junior guard tallied 12 points and 10 assists against the Privateers. His only previous double-double was against Nebraska in the first round of the 2019 NIT, when he collected 11 points and 12 assists.

Bryce Nze posted two consecutive double-doubles for just the second time in his college career. The Milwaukee transfer tallied double-doubles in three consecutive games from late January – early February in 2018, but other than that hadn’t accomplished the feat twice in a row until Nov. 9’s game against New Orleans.

Jordan Tucker’s 16 points were the most he’s had in a game since Jan. 19, 2019. Tucker scored 24 points, his career high, on that date against St. John’s. The junior forward scored 16 or more points only twice last season.

Christian David appears close to making his season debut after missing the team’s first two regular season games due to illness. “He’s still returning, he just hasn’t practiced,” Jordan said. “Hopefully he’ll feel a lot better tomorrow and be able to hop back into practice and get repetitions.”

What’s next: The Bulldogs will welcome Minnesota to Hinkle for an 8:30 p.m. game on Tuesday, Nov. 12. The Golden Gophers were picked to finish 11th in the Big Ten media preseason poll, and opened their season with a 85-50 win over Cleveland State on Nov. 5.