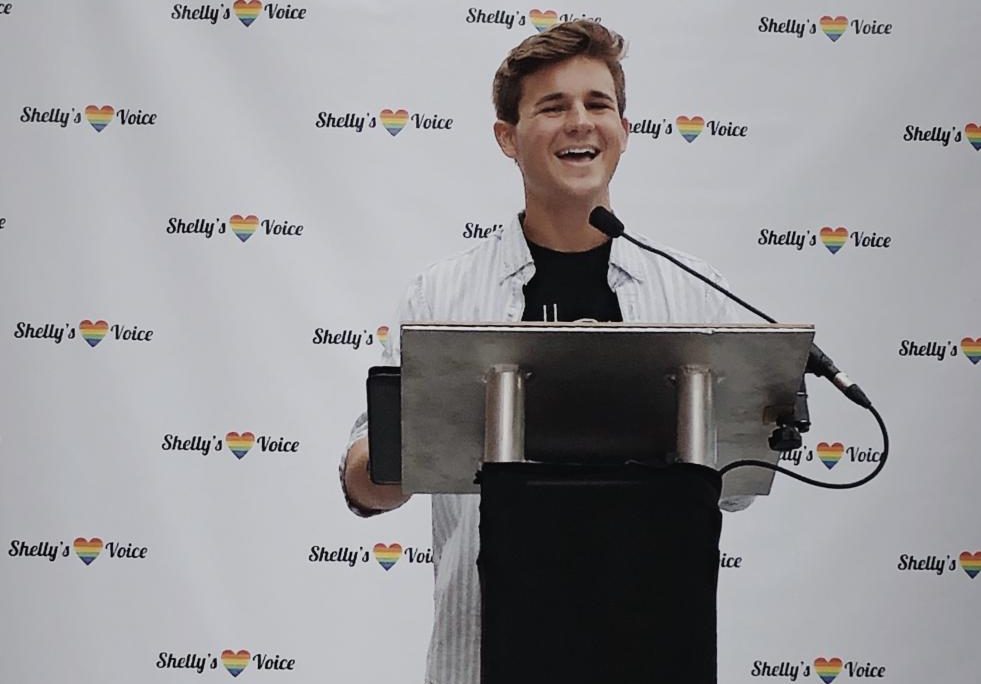 Shelly Fitzgerald, a guidance counselor at Roncalli High School in Indianapolis, was placed on administrative leave and later fired for being married to another woman in Fall 2018. When this happened, Roncalli students did not accept the decision by the school administration and the Roman Catholic Archdiocese of Indianapolis to remove Fitzgerald. A group of students formed a non-profit organization, Shelly’s Voice Advocacy Group, to combat discrimination against LGBTQ+ members of the Catholic faith.

The movement to stand in solidarity with Fitzgerald started with simply bringing flowers to school and passing out rainbow stickers to the Roncalli student body. However, the group quickly began gaining money and support through a GoFundMe campaign, which has raised nearly $8,000 since its creation in August 2018. Shelly’s Voice then appeared on The Ellen Degeneres Show in September 2018, receiving $25,000.

Dominic Conover, a first year political science major, is one of the founders of Shelly’s Voice.

“It is our mission to create a better sense of belonging for LGBTQ+ individuals in the Church, but also in the wider Indianapolis community,” Conover said.

In the time since Fitzgerald was fired from Roncalli, Conover has organized press conferences, planned protests and has even travelled to Iowa for the GLAAD LGBTQ Presidential Forum in September on behalf of Shelly’s Voice. GLAAD is a non-governmental media-monitoring organization, and is one of the largest LGBTQ+ media advocacy groups in the United States.

“From the Catholic community, [Fitzgerald] got more hate than love,” Kaur said, “But I think [Conover] loved her a lot, he was one of her biggest support systems.”

Though afraid of what Roncalli High School administration would do to him in response to his activism, Conover continued making public statements and planning events. In February 2019, after months of working with Shelly’s Voice, Conover was told by Roncalli administration that if he continued to publicly advocate for Fitzgerald, his high school diploma would be withheld.

“It was very, very hard to process that,” Conover said. “But I ended up remaining silent because I had plans after high school to come to Butler to continue my education and continue my activism. So I had to wait until graduation to speak out.”

After Fitzgerald was terminated from Roncalli, Archbishop Charles C. Thompson, the Archbishop of Indianapolis, announced to all Indianapolis-area Catholic schools that any other LGBTQ+ employees would have to be terminated. As a result, Cathedral High School teacher Joshua Payne-Elliot was fired because of his same-sex marriage.

Brebeuf Jesuit Preparatory School refused to terminate his husband, Layton Payne-Elliot, which resulted in Brebeuf’s status as a Catholic institution being revoked. Brebeuf has since appealed Archbishop Thompson’s decision to the Vatican’s Congregation for Catholic Education in Rome, and Joshua is filing a lawsuit against the Archdiocese.

Despite words and actions by Roncalli High School administration and the Archdiocese of Indianapolis, Conover feels that people of the Indianapolis Catholic community are supportive of Fitzgerald and the cause of Shelly’s Voice.

“When you’re listening to Catholics and they’re telling you ‘this is what we want, we want Shelly to go back to work,’ it shows me that I am fighting for feasible change and that I am fighting for other Catholics that feel the same,” Conover said. “I will say that it is difficult to work with the Archdiocese of Indianapolis. But, it’s just all a process of getting your voice heard, hopefully so that [Archbishop Thompson] can hear it and see the pain and suffering that go along with his actions towards LGBTQ+ individuals.”

“I honestly feel like we’ve accomplished a lot through everything we’ve done,” Ramsey said. “I’ve seen people that I never thought would believe what I believe come to support our cause.”

Fitzgerald has now filed a lawsuit against Roncalli High School and against the Archdiocese of Indianapolis. With the help of her former Roncalli students, Fitzgerald’s story has received national attention.

Both Ramsey and Conover are hopeful for the future of Shelly’s Voice.

“I see it continuing,” Conover said. “It’s going to be a long fight for what we want, but I think the structure we have at Shelly’s Voice is going to go a long way over the next few years.”