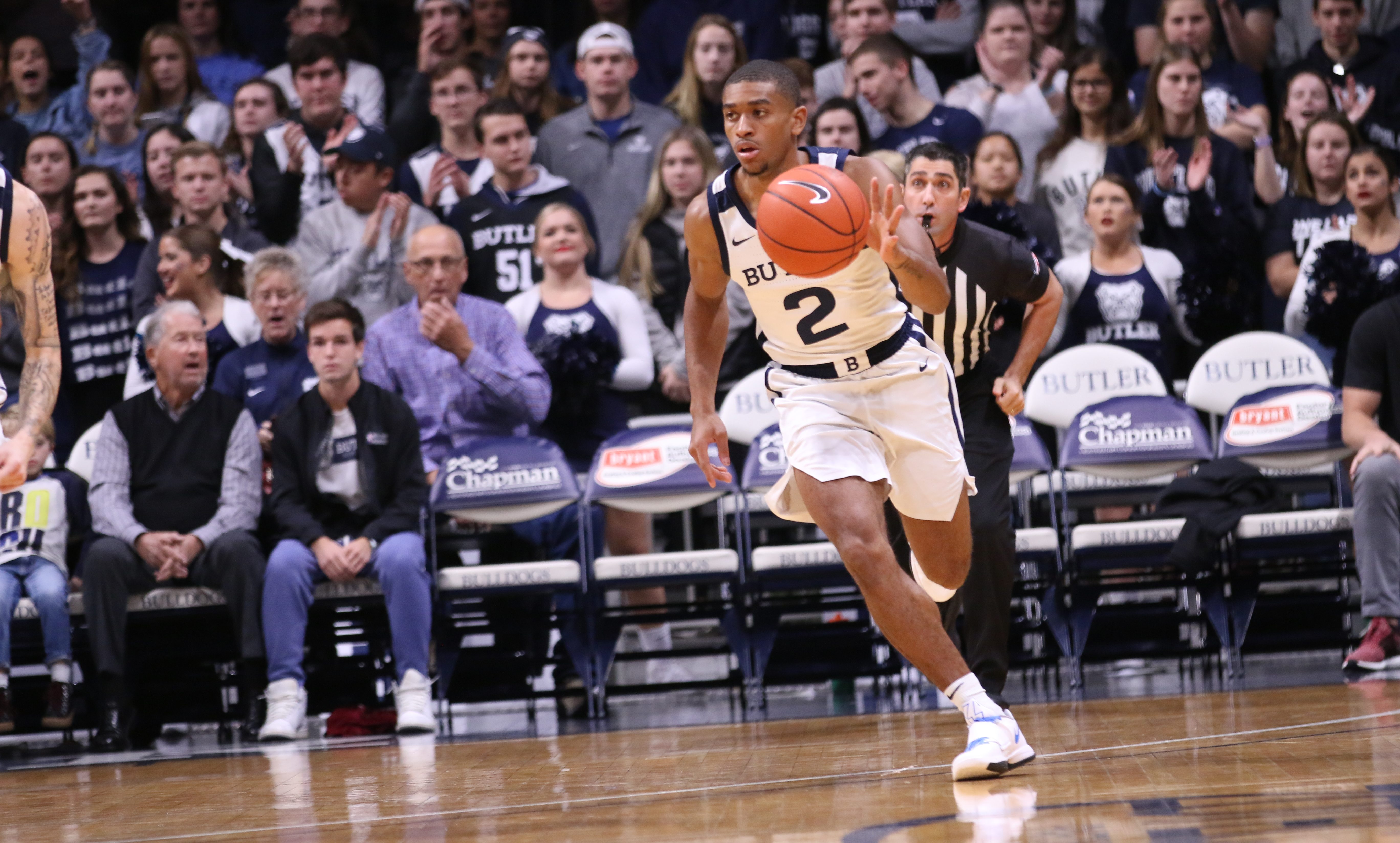 Aaron Thompson brings the ball down the court during Butler’s win over UIndy in the team’s second in final exhibition game. Xan Korman/Collegian file photo.

The men’s tennis team competed at the ITA Ohio Valley Regional in Nashville, Tennessee, this week. In an up and down tournament, the young Butler team was particularly competitive in singles matches. Four different Bulldogs won singles matches. The standout for Butler was sophomore Drew Michael who won three matches over the weekend.

The women’s soccer team wrapped up its season this week with a pair of tough losses. On Oct. 31, Butler fell to Xavier 2-0 in their regular season finale on a freezing and snowy Halloween night. In a chippy match, the Bulldogs fell behind early and conceded again in the final minutes.

On Nov. 3, Butler fell to Providence in penalty kicks in the quarterfinal of the Big East tournament. The Bulldogs struck first with a goal from sophomore Anja Savich in the 39th minute off of a free kick. The Bulldogs had chances to increase their lead in the second half, but strong goalkeeping from the Friars kept the lead at one. In the 83rd minute, Providence scored off a rocket of a direct free kick. After two scoreless overtime periods, the game went to penalties. The score was tied 4-4 when Providence saved junior Payton Black’s attempt to secure the win.

The volleyball team played two games this week.  On Nov. 2, the Bulldogs defeated DePaul 3-2 after coming from behind.  Butler fell behind after dropping the first two sets. After winning the third and fourth sets, the Bulldogs won the fifth 15-8.  Redshirt sophomore Melody Davidson led the comeback with 13 kills and six blocks.

On Nov. 3, Butler was swept 3-0 by No. 10 Marquette.  The Bulldogs competed well and kept the second and third sets close, but it ultimately was not enough.  Senior Brooke Gregory had eight kills and four blocks. Next up, Butler will play two away games at Seton Hall and St. John’s.

The men’s cross country team finished third overall in the Big East Championship. Redshirt senior Euan Makepeace won the men’s 8K for the Bulldogs with a time of 25:03.9. Now, several Bulldog runners will prepare for the NCAA Great Lakes Regional.

The women’s basketball team also won an exhibition game against UIndy, by a score of 70-46.  The Bulldogs took control in the third quarter, outscoring UIndy 22-6. Freshman Tenley Dowell led the way in her debut with 18 points while senior Kristen Spolyar added 12 points, six steals, and five rebounds.

The football team lost at Marist 37-27. The Bulldogs had more total yards in the back and forth contest, but turnovers helped keep Butler out of the win column. Redshirt freshman Nick Orlando finished with 183 passing yards, 60 rushing yards, two total touchdowns and two interceptions. Butler’s record is now 2-7 (1-4).

The men’s soccer team lost 2-1 at Creighton in double overtime on Nov. 2. Sophomore Griffin DeBolt put the Bulldogs on the board first with a goal in the fourth minute, but Butler conceded a goal in the 26th minute and again in the 105th minute.  Butler has one game left in the regular season and sits in fifth place in the conference standings. A win on Nov. 6 against Xavier would secure a spot in the Big East tournament.