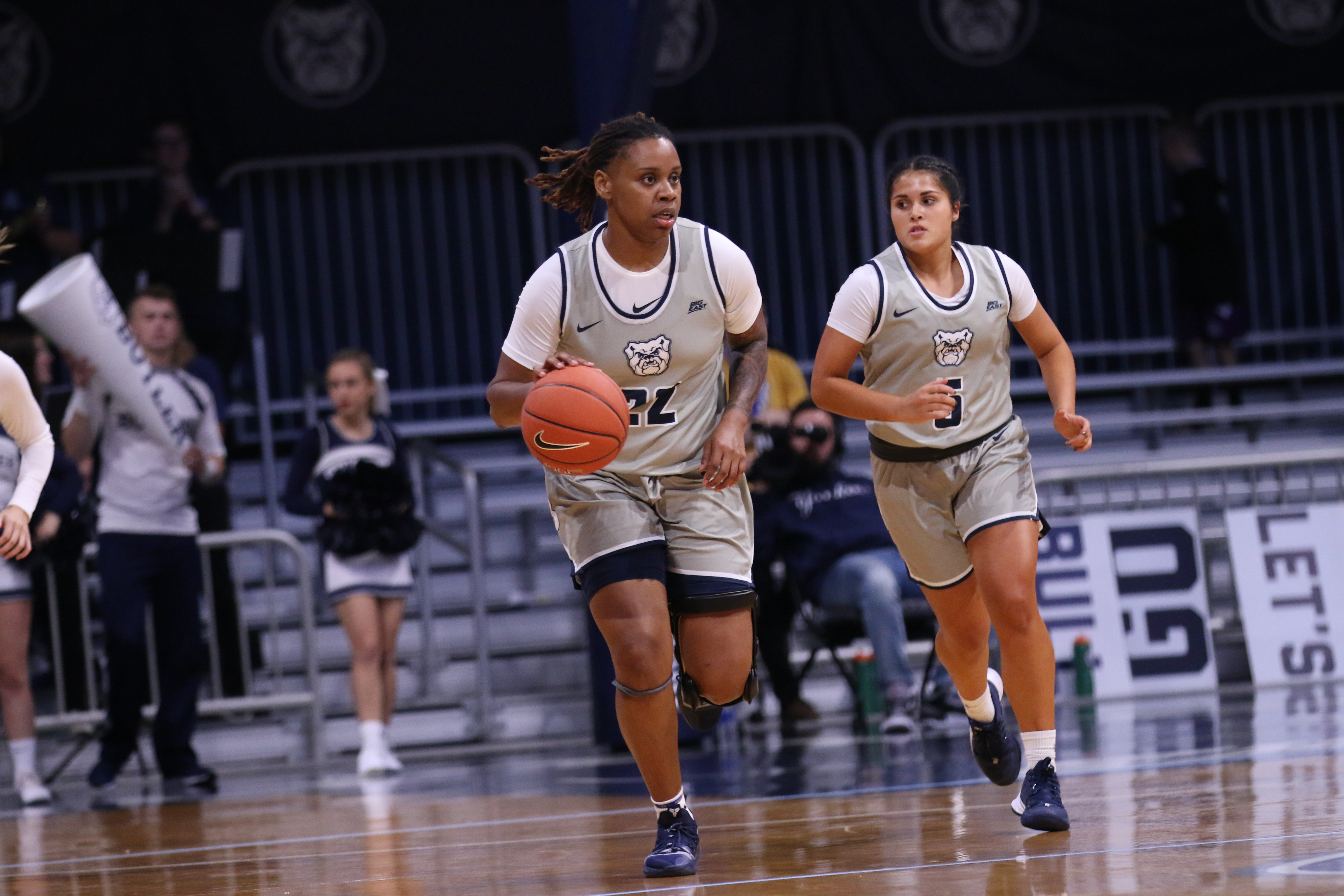 Katherine Strong brings the ball down the court during the Butler women’s basketball team’s win exhibition win over UIndy on Nov. 2. The Bulldogs defeated Wagner 74-58 on Nov. 9 to open their season. Xan Korman / Collegian file photo.

The men’s soccer team finished their regular season and began postseason play this week. On Nov. 6, Butler defeated Xavier at home 2-1 to clinch a spot in the Big East tournament. The Bulldogs took an early lead after senior Brandon Guhl’s goal, but went into halftime tied 1-1.  Freshman Wilmer Cabrera Jr. scored the winner in the 52nd minute.

Then on Nov. 9, the Bulldogs upset Creighton on the road 1-0 in the Big East tournament quarterfinals. In a defensive contest, Cabrera Jr. scored another winner with an 84th-minute penalty kick. The Bulldogs will travel to Washington D.C., to face the tournament’s top seed, Georgetown in the semifinals.

The men’s basketball team opened their season this week with a pair of home games. On Nov. 6, Butler defeated crosstown opponent IUPUI 80-47. Prior to the game, it was announced that five Butler players would be unavailable due to injury, illness or suspension. To make matters worse, injuries to guards Kamar Baldwin and Campbell Donovan in the first half left the Bulldogs with only six healthy players. Butler took the adversity in stride, however, and got a comfortable win. Junior Bryce Nze had 11 points and 11 rebounds in his Butler debut and sophomore Bryce Golden added a career-high 17 points and eight rebounds.

The volleyball team continued their season this week with a pair of road games. Butler came from behind to defeat Seton Hall 3-2 on Nov. 8.  The Bulldogs dropped the first two sets but stormed back in the third, fourth and fifth sets to secure the win. Junior Shay Horn had a career-high 15 kills in the win.

Then, on Nov. 10, Butler was swept by St. John’s 3-0. The Bulldogs kept the match close in all three frames, but did not have enough to pull out the win. Redshirt sophomore Melody Davidson led the team with 10 kills and 3 blocks.

The football team suffered another tough loss over the weekend, losing 52-10 at home to Davidson. The Bulldogs put the game’s first points on the board with a field goal on the opening drive. From there, it was all Davidson. The Bobcats put up 33 unanswered points in the second quarter and continued to dominate for most of the afternoon. With two games left in the season, Butler’s record sits at 2-8.  The Bulldogs’ next game is Nov. 16 at home against rival Valparaiso.

The women’s basketball team opened their season with a 74-58 win over Wagner. The Bulldogs started hot, outscoring Wagner 27-9 in the first quarter. Defense was key for Butler throughout the game, as they forced 29 turnovers. Senior guard Kristen Spolyar led the team in scoring with 17 points.