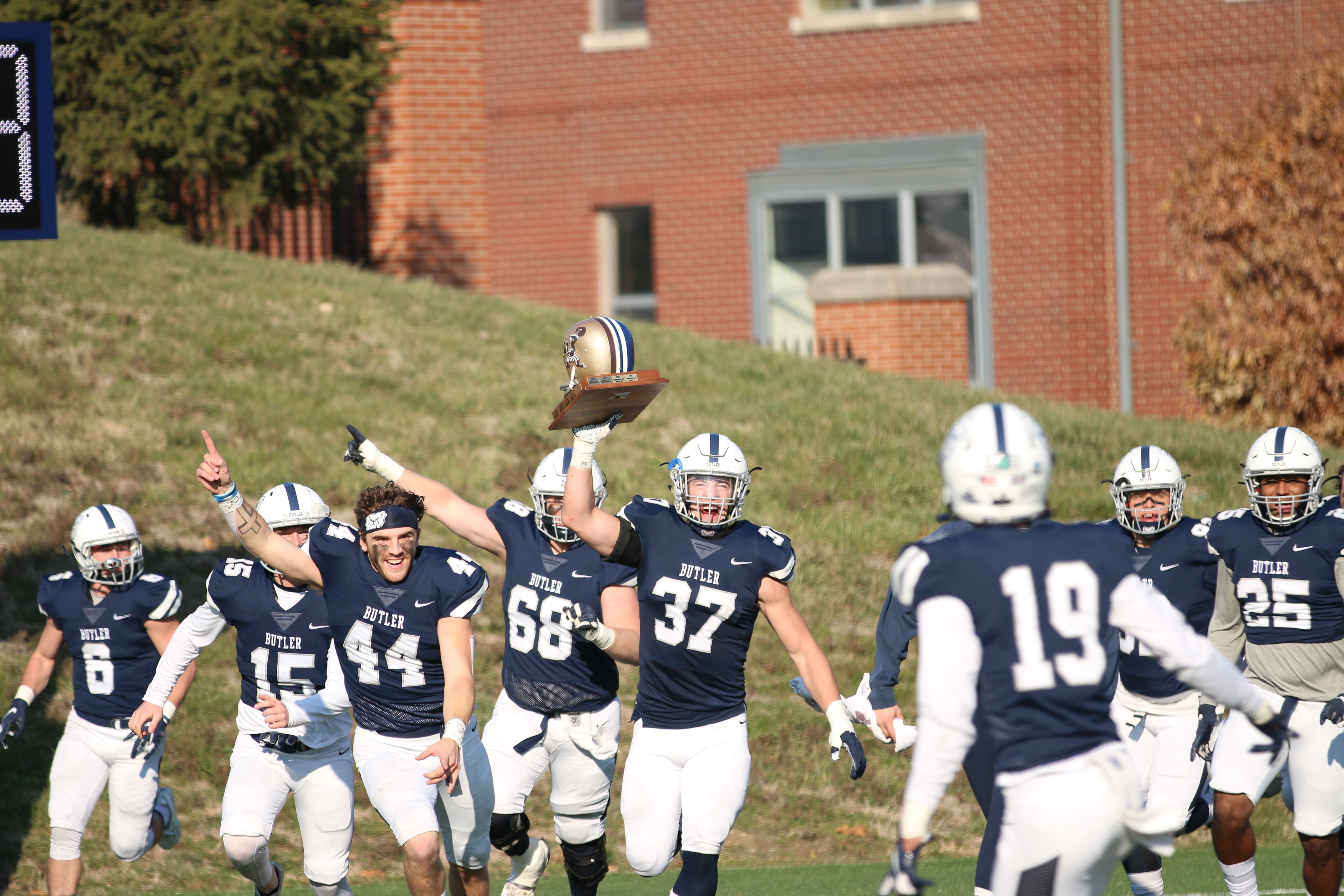 Butler football celebrates with the Hoosier Helmet after a 24-21 win over Valparaiso on Nov. 16. Photo by Xan Korman / Butler Collegian.

The men’s soccer team lost to No. 3 Georgetown in penalties in the Big East Tournament semifinals on Nov. 13.  The top-seeded Hoyas started hot with a goal in the third minute, but the Bulldogs equalized almost as quickly with senior Alex Lehtinen’s goal in the seventh minute.  Georgetown took another lead in the second half with a penalty in the 51st minute, but Butler tied it up again with a goal from senior Brandon Guhl on the counter. After two scoreless overtime periods, the game went to penalty kicks.  With the score still tied after three rounds of penalties, Georgetown secured the win after a pair of Butler misses. While the loss ended Butler’s run in their Big East season, there is still hope for an NCAA Tournament bid. The Bulldogs have a solid resume that includes a top 25 ranking in the NCAA’s RPI metric and are hoping for an at-large bid.  The tournament field will be revealed on Nov. 18.

The Butler men’s basketball team had an impressive week with a pair of home wins.  On Nov. 12, the Bulldogs defeated Minnesota 64-56. The game was sometimes ugly, but Butler’s defense was strong throughout.  The Bulldog defense forced 18 turnovers and held Minnesota to 33 percent shooting from the field. Senior Kamar Baldwin led the way with 27 points, 18 of them coming in the second half, and junior Bryce Nze added 11 points and 8 rebounds.  This was a resume-building win that could prove important at the end of the season when the Bulldogs will be competing for an NCAA tournament berth.

Then on Nov. 16, the Bulldogs defeated Wofford 80-61.  The Butler defense was stout once again, holding a Terrier offense known for its outside shooting to only 18 percent from 3-point range.  In a balanced team scoring performance, Baldwin and Nze were stellar once again, adding 23 and 12 points respectively, with Baldwin also grabbing 7 rebounds.  Senior Sean McDermott added 10 points and 7 rebounds and freshman Khalif Battle provided 9 points off the bench. The two wins this week kept the Bulldogs undefeated with a 4-0 record.  The team will be in action again on Nov. 22 when they take on Morehead State at home.

The women’s basketball team also picked up a pair of home wins this week.  On Nov. 13, Butler defeated Detroit Mercy 82-60. A big second quarter gave the Bulldogs a sizeable lead and they never looked back.  Senior Kristen Spolyar scored a career-high 37 points in the win.

The men’s cross country team finished seventh at the NCAA Great Lakes Regional.  The Bulldogs were led by senior Euan Makepeace who finished second in the 10K with a time of 30:05.5.  With their performances, Makepeace and senior Simon Bedard both qualified for the NCAA Championships, which will take place next week.  Makepeace and Bedard also earned USTFCCCA All-Region Honors.

The women’s cross country team also finished seventh at the NCAA Great Lakes Regional.  Junior Emily Royston led the pace for Butler with a 17th place finish in the 6K. Royston also earned USTFCCCA All-Region Honors for her performance and qualified for the NCAA Championships.

The volleyball team had a pair of home games this week.  On Nov. 15, Butler swept Providence 3-0. Senior Anna Logan was the top performer for the Bulldogs with 13 kills and 13 digs.

Then on Nov. 17, the Bulldogs were swept by No. 14 Creighton 3-0.  Butler kept all three sets close, but could not find any wins. Logan was impressive once again seven kills, 11 digs, and four blocks.  After this week’s games, Butler’s record stands at 12-16 (9-7). The Bulldogs will finish the regular season with two games against Xavier, one at home and one away.

The football team defeated rival Valparaiso to win Hoosier Helmet on senior day 24-21.  Butler led 21-14 with under a minute to go, but Valpo tied the game with 19 seconds remaining.  The Bulldogs marched 44 yards down the field, and with the help of a penalty, worked the ball into field goal range. Senior kicker Drew Bevelhimer made a 38-yard field goal with no time remaining to secure the win for the Bulldogs.  Redshirt Senior Steven Dennis caught 11 passes for 143 yards and a touchdown and redshirt sophomore Sam Brown threw for 209 yards and 2 touchdowns. The Bulldogs will finish their season next Saturday at Dayton.