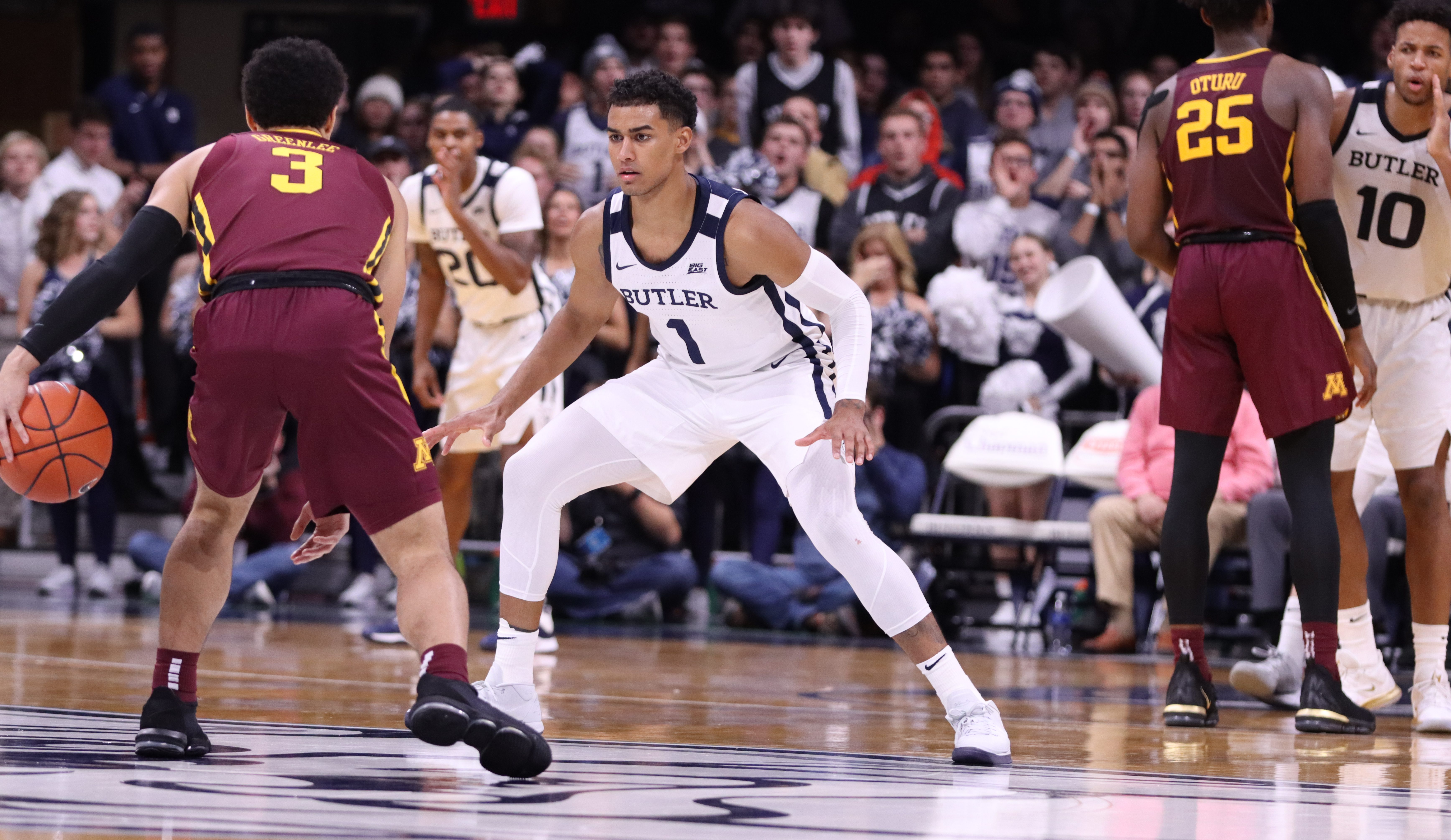 Kamar Baldwin’s first shot of the second half came up just short. The 3-point attempt hit the rim and backboard before falling away.

Three minutes later, Sean McDermott tried to connect from beyond the arc. His shot came up short, bouncing off the front of the rim.

Nearly four minutes passed before the Bulldogs attempted their next 3-pointer. Jordan Tucker’s shot fell off the back of the rim.

The clock read 3:20 before Baldwin faked out Daniel Oturu to gain space and knock down Butler’s first 3-pointer of the second half.

In all, the Bulldogs converted just three of 14 shots from beyond the arc — roughly 21% — against Minnesota on Nov. 12.

This year’s Butler team played fundamentally sound defense, made halftime adjustments to improve rebounding, and forced 18 turnovers, which it converted into 25 points en route to a 64-56 win over the Golden Gophers.

It was a victory emblematic of many of the strides this team has made in getting back to playing traditional Butler basketball.

The Bulldogs have played just four regular season games thus far, too few to make any drastic, sweeping conclusions. But what’s clear is this team has shown significant positive signs in three key areas: depth and versatility, defense, and direction.

With Tucker out due to an NCAA suspension and Baldwin exiting early with a rib injury, Butler played nearly all of its season opener against IUPUI without four of its top five scorers from a season ago.

In short, the team has needed projected bench pieces and players unproven at the college level to show abilities they hadn’t — at least not consistently — in the past to start its season off on a strong note.

Numerous players stepped up to answer the call, perhaps none more than Bryce Nze. The Milwaukee transfer sat out last season and started his Butler career with back-to-back double-doubles and is averaging 13 points and eight boards per game. The 6-foot 7-inch, 235-pound center isn’t always flashy, but brings a tough, physical, quick, consistent presence on the glass and has proven he’s able to pass well out of the post.

Also making his presence known on the interior is sophomore forward Bryce Golden, who racked up 17 points and six rebounds in the Bulldogs’ season opener.

“We like the composition of the roster,” Jordan said following Butler’s win over Minnesota. “We started big, and Bryce [Nze] was good early. They had to make some decisions and kind of counter. Then we went small and tried to spread out the floor so we could space it out and drive it a bit there…The pieces are versatile, which is a good thing.”

Nze and Golden have been far from the only players that have shown Butler’s increase in quality depth. Four-star prospect Khalif Battle showed flashes of his potential with 11 and nine-point performances against IUPUI and Wofford, respectively. Christian David is averaging nearly six points per game including the team’s exhibitions and appears destined for a significantly increased role following an offseason dedication to strength and conditioning.

And not to be forgotten is Tucker, the junior forward who in his first full season with the Bulldogs put up 16 and 10 points in his first two games of the year.

On Nov. 16 against Wofford, that depth and ability to adjust on the fly was on full display. Nine Butler players found the back of the net, including eight in the first half, and the team adjusted to the Terriers playing small by playing three guards — Baldwin, Battle and Aaron Thompon — at the same time. With that lineup, the Bulldogs were able to adjust to screens in limit Wofford on the perimeter.

Assuming health, at this point it appears Baldwin, Thompson, McDermott and Nze are likely to be part of the Bulldogs’ starting lineup on a regular basis. It’s the options Jordan appears to have beyond those four that show the versatility and depth this team possesses.

Looking for another shooter? There’s Tucker.

And that, right there, is one key difference.

When asked in the preseason what getting back to Butler basketball means to him, McDermott said it all starts on one end of the floor.

That’s been the hallmark of Butler basketball for years — not offensive firepower, but a defense-first, scrappy, making-opponents-work-for-every-last-bucket type of play.

It hasn’t been perfect, but overall that’s what we’ve seen from this team through its first four games.

Consider this: Butler’s given up on average 54.3 points per game to its opponents, tied for the 16th-best mark in the country through games on Nov. 18. The Bulldogs held each of their first three opponents to under 60 points, something they did in only four games total last season. And the team fell just short of a fourth straight such contest, surrendering 61 points to Wofford.

The Terriers came into their game against Butler shooting 42.7% from beyond the arc, good for 22nd in the country. Faced with their biggest perimeter threat yet, the Bulldogs held Wofford to under 20% on 3-pointers, proving their defensive improvements translate to a wide range of situations.

The improvements here are undeniable, and the origins spread out among the team. Clearly, Butler’s ability to play big with Nze and Golden has its benefits, and this is one of them.

But another, less inherently obvious benefit is the impact that has on McDermott, who last year was tasked with guarding opponents’ bigger players, but this year has been in fewer situations where he’s physically overmatched. Through three games, McDermott is averaging 6.5 rebounds per contest, up from under four his last two seasons.

Combine those aspects with apparent defensive improvements from Tucker, Thompson and David, among others, with fewer sloppy defensive breakdowns and this team has improved in multiple ways.

There are numerous ways in which leadership manifests itself on a basketball team, many of which don’t show up in the stat sheet.

It comes in the form of Thompson skillfully running an offense filled with inexperienced players without Baldwin for all 40 minutes in the season opener.

“I think AT’s always been a pretty vocal leader since his freshman year, he filled that role,” McDermott said following the win over IUPUI. “But now it’s gone to another level…He’s also leading by example really well. You can constantly hear him on the court…He’s done it vocally and with his actions this year.”

It comes in the form of Kamar Baldwin in the ear of two of the team’s freshmen, Battle and John-Michael Mulloy, during their first regular season college basketball game. Baldwin, out for the rest of the game with a rib injury, pulled aside the underclassmen during timeouts to offer advice and encouragement.

That consistent attention to helping teammates at all times is something Thompson has seen throughout the first games of the season.

“Everybody’s just been staying involved,” Thompson said. “Nobody’s been tuned out, even when they’ve been technically out of the game.”

It comes in the form of seniors both vocally and by example showing teammates what’s expected every day, whether fans see it on the court or not.

“Our seniors and our upperclassmen right now, their leadership is in a really good place,” Jordan said following the team’s season opener. “They’re owning their team, they’re holding each other accountable.”

On a night when McDermott led all scorers with 26 points, Jordan’s praise for his redshirt senior focused on more than just made shots.

“Sean deserves a night like this statistically, but his voice is as big as his numbers and any baskets he makes right now,” Jordan said. “Same with Kamar Baldwin, same with Henry Baddley.”

This team clearly has a sense of the direction it wants to go, and that all begins with strong leadership.

This is a team that’s shown early it’s learned from the mistakes of last year.

A team that can lose seven players and adjust and adapt and push through without falling apart.

A team that can win without its top scorer.

A team that can win in multiple ways, whose success isn’t tied so directly to the 3-pointer and who sticks to its defensive principles when the shots aren’t falling.

How many of those traits are here to stay for the entire season? Is Sean McDermott that consistent second scorer the team needs? Can Jordan Tucker be more consistent? Can Nze and Golden keep it up? There are plenty of questions still surrounding this team. But there is one thing we do know at this point.