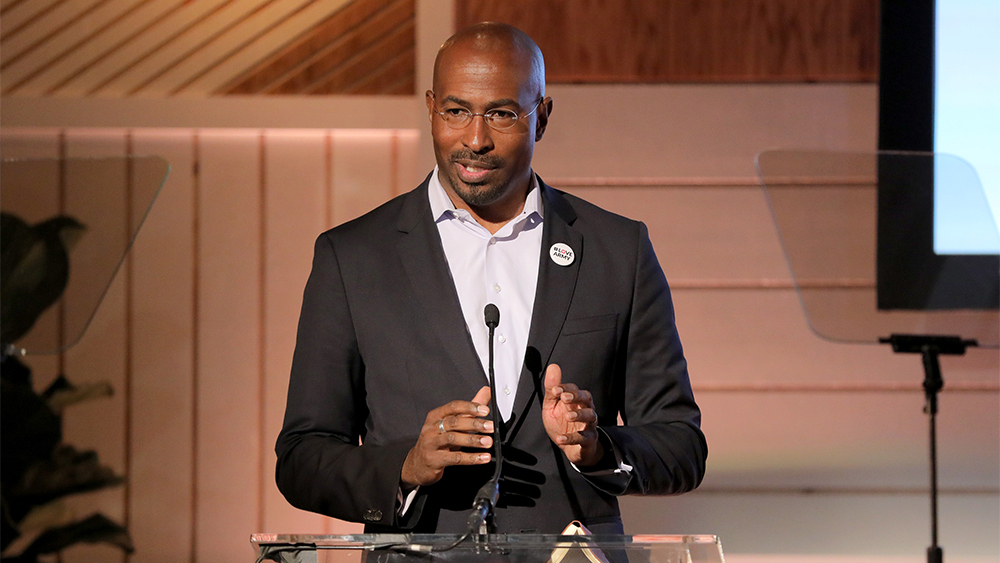 Van Jones joined leaders of the Indianapolis community to discuss poverty and controversial topics in 2019. Photo courtesy of Variety.

“If you’re happy to be here, can you say Amen,” David Mellott said to the audience. His introduction set the tone for the evening reflecting on faith, social issues and having a positive impact on the Indianapolis community.

“As people of faith we are expected to care for those who are most vulnerable,” Mellott said.

On Oct. 1, the Christian Theological Seminary presented its Faith and Action Project Fall event “Uncomfortable Truths, Healing Impact” with headliner Van Jones in Clowes Memorial Hall. Seats were filled on three levels and was publicized to be sold out the day of the event.

Through annual public events and grants, the Faith and Action Project “seeks to ignite a collaborative, interfaith, and inclusive movement for well-being and justice in our community.”

Jones, born Anthony Kapel Jones, is a social entrepreneur, CNN political commentator and host of “The Van Jones Show” on CNN. Jones received his B.S. in communication and political science from the University of Tennessee at Martin and continued his education at Yale Law School.

Jones was joined by three other panelists from the Indianapolis community, including Jeffrey A. Johnson Sr., senior pastor of Eastern Star Church, Dennis Bland, president of the Center for Leadership Development, and Betsy Delgado, vice president of mission and education initiatives at Goodwill of Central and Southern Indiana.

After nearly two and a half hours of discussion, big takeaways from the night included bridging the gap between Democrats and Republicans, the gap between socioeconomic classes in America and investing in youth from disadvantaged backgrounds.

The discussion was led by moderator Don Knebel, founding board chair of the Center for Interfaith Cooperation and vice board chair of the Triangle Education Foundation. Knebel asked questions to Jones and the other panelists ranging from political views, the importance of faith in communities and the current state of American and citizens living in poverty.

Jones talked throughout the night about criticisms he has received for being a Christian and a liberal political commentator. He explained that one of the biggest social dichotomies that confront those who identify as Christians and liberals revolves around issues including women’s rights, LGBTQ+ advocacy and socioeconomic disparities between liberals and conservatives.

Jones described the conflict between the political parties as a “food fight” that is great for television and great for the ratings, but bad “for the people on the bottom.”

“Maybe these parties don’t care about us, and we need to start caring for each other,” Jones said. “Common pain should lead to common purpose.”

Johnson leads the congregation of Eastern Star Church, prioritizing service and giving back to the community. His church has three locations in the Indianapolis area with several initiatives towards improving the lives of disadvantaged members of the Indianapolis community.

“Get in where you fit in,” Johnson said to the audience on the topic of purpose and giving back. “Even if you can’t do everything, you can do something.”

The Indianapolis area with zip code 46218 is of high priority to him, and this is evident in the $200,000 his church has raised for technology in an underfunded school and his support efforts in low-income housing.

“One public school in Arlington 46218 should not look like a school in Haiti, while another school in the same state looks like Harvard University,” Johnson said receiving applause.

Johnson emphasized that regardless of an individual’s background, anyone can make an impact and change lives.

Bland also furthers the conversation about helping the poor by redefining the idea from a spiritual perspective.

“A poor spirit is poorer than a poor person,” Bland said.

He repeatedly asked the question, “What does it mean to have a poor spirit?”

“What does it mean to have a poor spirit?” Bland said one last time. “If my inside is bad, bad things will come out.”

A commonality amongst the solutions proposed by the panelists involved building up and reinvesting in the youth in Indianapolis and across the country.

“They are suffering the effects of our irresponsibility,” Bland said.

He references an African proverb about the relationship between a village and its youth and ends the proverb by saying, “If the young are not initiated into the village, they will burn it down just to feel its warmth.”

One of Jones’ biggest talking points about uplifting the youth involved a conversation he had with Prince, the artist, after the death of Trayvon Martin, an African American teenager fatally shot by a neighborhood watch volunteer. Jones recalls Prince asking about black males in hoodies being called thugs, and saying “white kids in hoodies are called Mark Zuckerberg’s.”

Jones then gave his thoughts on poverty and the perception of black youth growing up in poverty.

“The way you fight poverty,” Jones said, “you have to look at your communities as huge sinks of genius.”

Delgado used the same idea to give her thoughts about American mindsets towards success.

“We want to get rid of the idea in America that people have to pick themselves up by their bootstraps,” Delgado said. “That’s not true. Everyone needs help pulling themselves up.”

Jones responded by relating world issues back to the audience.

“Part of the fiction is that ‘people need help over there,’ but really, there’s pain in this room,” Jones said. “The best thing for you to do is to chase your dreams. There are dreams in this room that could change the whole city.”

By the end of the night, audiences had felt a range of emotions audible through cheers, hand claps, sighs and hums of approval. Jones had moments of prophetic wisdom, candid humor and personable approachability towards topics of race, religion and social class. All the while, he emphasized the importance of humanity and empathy towards building better futures for cities like Indianapolis and for America’s youth.

“Sometimes it just takes one person,” Jones said. “To reach out and tell you that you matter.”