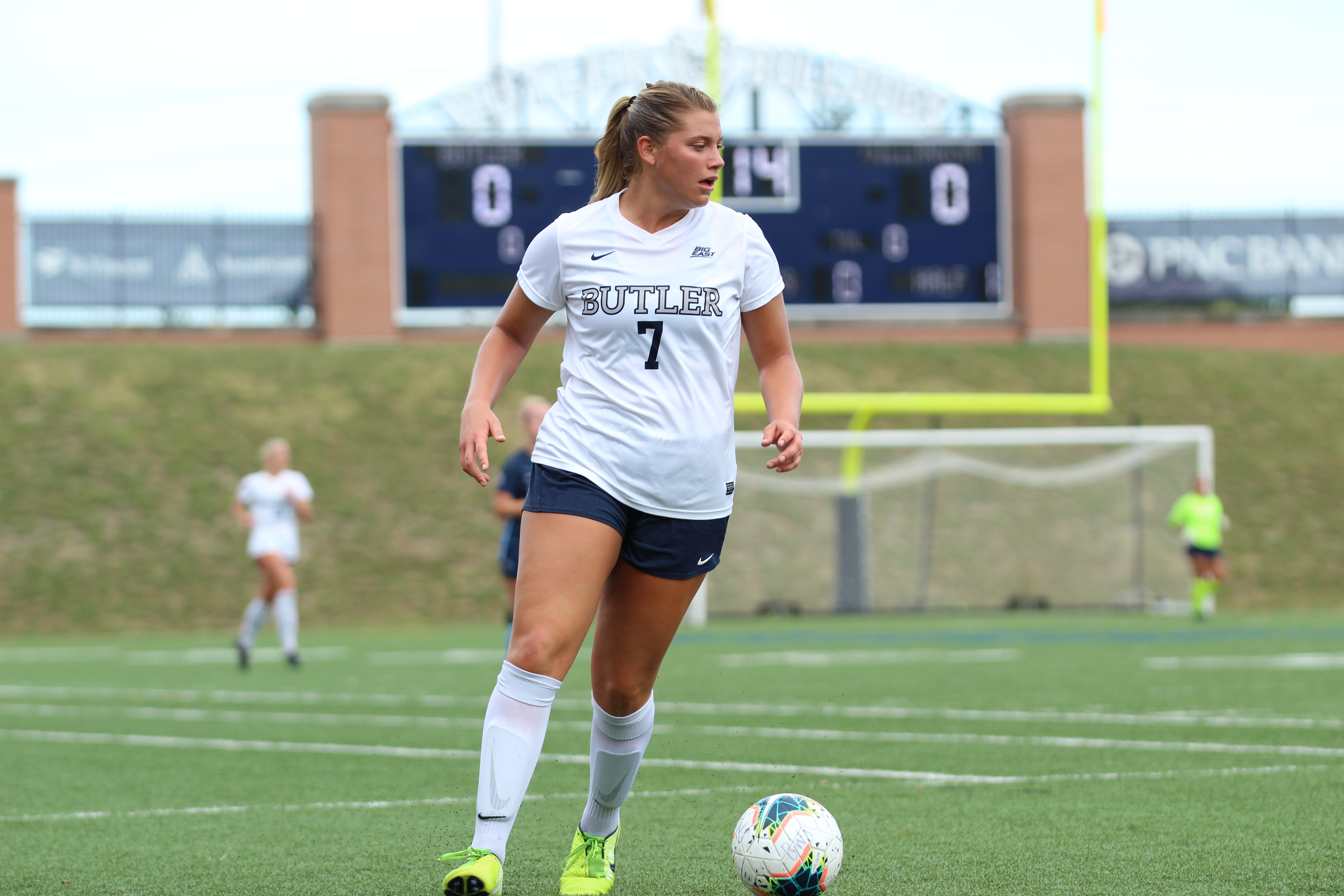 Anja Savich controls the ball during a game this season. Savich leads the Bulldogs in goals this year with seven. Photo by Chandler Hart.

They say a “sophomore slump” is inevitable in college.

After the novelty of college life wears away, the successes of a first-year athlete are sometimes too good to be true.

No one would blame Butler women’s soccer sophomore Anja Savich for having a down year this season. After all, she was the Big East Freshman of the Year in 2018 and the team’s second-leading scorer.

The same goes for Katie Soderstrom. With a number of experienced players ahead of her, she posted a solid freshman effort of two goals and four assists last season.

Butler has scored 23 goals this season. Twenty-one of those goals have been accounted for either by a score or assist by Savich or Soderstrom. They have propelled the Bulldogs to a 6-4-2 record this season.

“Both [Katie and Anja] have this ‘put the weight of the team on my back’ mentality about them and they have no problem stepping up and making the necessary plays to win games,” co-head coach Tari St. John said. “Usually that’s someone who grows into that mentality as a junior or senior, but I think both Katie and Anja have this bravado that allows them to seize those pressure moments when we need a goal.”

Just last week, Soderstrom and Savich performed in a pair of crucial moments for the Bulldogs.

Facing a potential 2-0 halftime deficit at DePaul on Oct. 3, Soderstrom scored late in the first half to cut into the Blue Demons’ lead.

Then, in their match against Villanova last Sunday, it was both Soderstrom and Savich that created the game-tying penalty kick.

Soderstrom drew contact in the box. Then Savich buried the penalty kick to level the score against the Wildcats.

“I just think [Katie and I] just have this competitiveness mindset,” Savich said. “We both go into it with a mindset of we need to win this game and we’re going to do whatever it takes to win it.”

But Soderstrom and Savich represent a more broad storyline for the Bulldogs this season: Butler relies heavily on members of the sophomore class, at least statistically. Additionally, Butler is one of two teams in the Big East where sophomores lead in both goals and assists categories.

The Bulldogs started four sophomores last Sunday against Villanova, as midfielders Morgan Kloosterman and Celia Gaynor were in the lineup along with Savich and Soderstrom. All four athletes have played in every match so far this season.

Kloosterman started in 11 games last season and scored three goals. She plays a pivotal role in the Bulldogs offense when it comes to winning battles in the midfield. Gaynor, who St. John said is the most improved of the sophomore class, has started eight matches while scoring a goal and recording an assist.

If you account for Gaynor’s goal in the season opener against Morehead State, all but one of the Bulldogs’ goals this year has come by way of a statistical contribution from a sophomore.

“We don’t really look at it as only the sophomores lead the team,” Soderstrom said. “Our program’s mentality is that from everyone from freshmen to seniors can lead. None of us on the team really care or get jealous about who leads our team.”

Soderstrom’s goal against DePaul was her fifth in the 2019 season. She leads the team and is tied for seventh in the nation with seven assists through Oct. 2.

Soderstrom notched two goals and two assists for the Bulldogs against IUPUI on Aug. 25. Following the win, she was named the Big East Offensive Player of the Week.

“I think confidence has been the biggest key for me this season,” Soderstrom said. “I have that year under my belt to where I’m not a timid freshman anymore, and that’s helped me play more free and attack how I want this season.”

With 14 goals in her 32-game Butler career, Savich has a reputation for finding the back of the net. She is also an underrated passer by the coaching staff’s account.

St. John said Soderstrom and Savich each bring different variety to their game, goals assists among others.

“The more that your best players have more dimensions to their game and impact the game in different ways, the better off you’re gonna be,” St. John said. “They have shown the skills to do more than just score goals for us.”

“For as much as you want to stay in the moment and work on the now aspect of things, I think they understand that they can be even better than they are now,” St. John said. “I think they would be disappointed if they were the same player as seniors that they are as sophomores.”