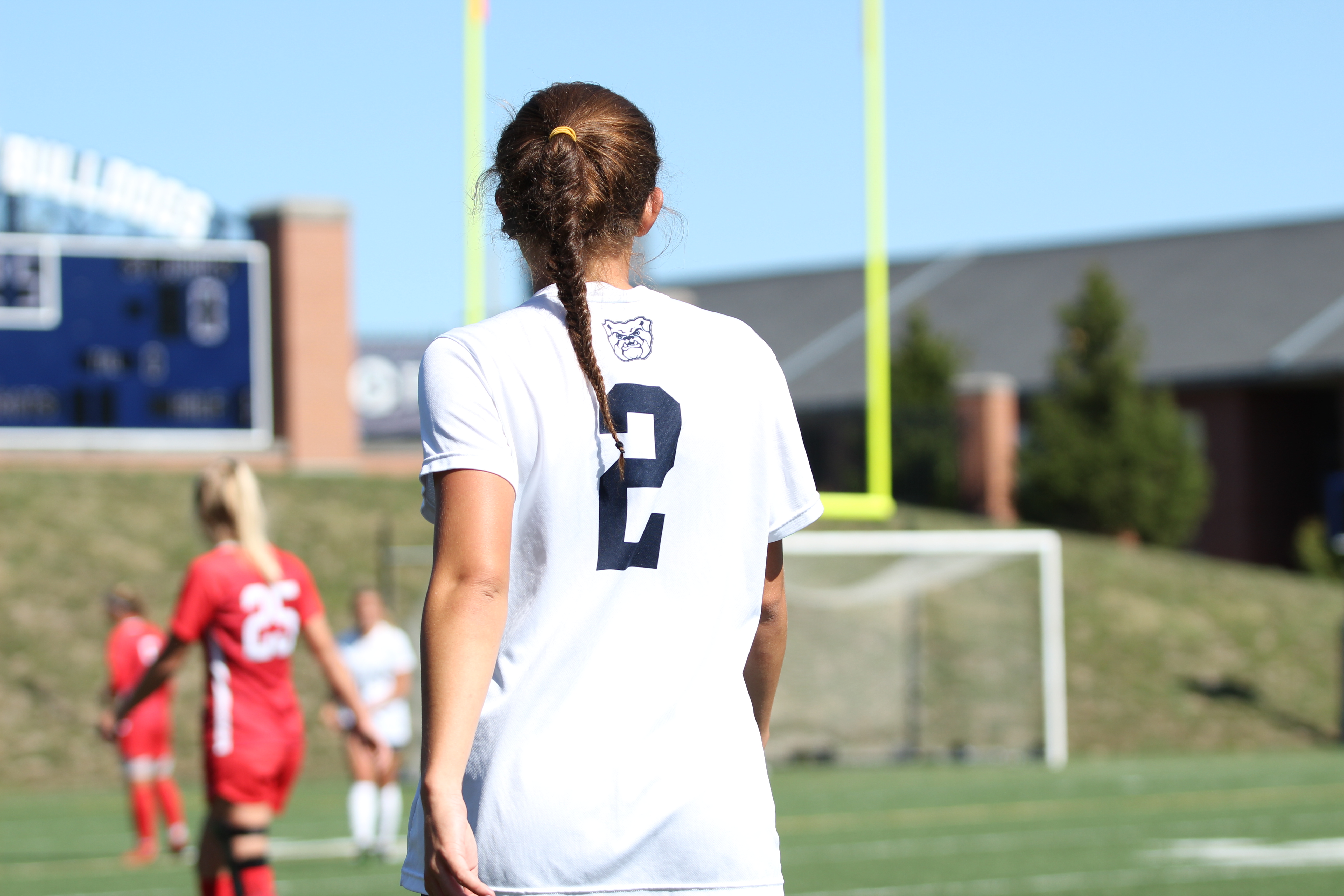 Katie Soderstrom scored both goals for Butler women’s soccer this week as the Bulldogs went 2-0 in conference play. Photo by Chandler Hart.

The women’s golf team finished second in an eight team field at the Butler Fall Invitational.  In addition, junior Katelyn Le finished first and junior Ally Ross finished second in the individual standings.  For her play, Le was also named Big East Golfer of the Week. The team will be in action again on Oct. 14 at the Dayton Flyer Invitational.

On Oct. 8, the men’s soccer team defeated an underachieving Akron 1-0 at home in double overtime.  The game was tightly contested the whole way, but the difference was senior Alex Lehtinen’s header off of sophomore Jack Haywood’s corner kick in the 110th minute.

In a return to conference play, Butler drew DePaul 2-2 on Oct. 12.  The Bulldogs fell behind in the first half, but second half goals from senior Derek Sutton and redshirt senior Jared Timmer gave Butler the lead after 78 minutes. But the Bulldogs conceded a penalty goal in the 90th minute to bring the score level.  After two overtimes, the game ended in a 2-2 draw. This week’s results put Butler’s record at 6-4-1 (1-2-1). In their next action, the Bulldogs will travel to Nashville on Oct. 16 to take on Lipscomb.

The women’s soccer team won two conference games this week behind a pair of goals from sophomore Katie Soderstrom.  On Oct. 10, the Bulldogs defeated Creighton on the road 1-0. Strong defensive performances from both teams left the game scoreless after 90 minutes.  The difference was Soderstrom’s 92nd minute goal in the first overtime.

On Oct. 13, Butler returned to the Sellick Bowl and defeated St. John’s 1-0.  The Bulldogs had their share of chances for much of a tight contest, but couldn’t break the St. John’s defense until the second half.  In the 78th minute, Soderstrom scored her second goal of the week off of a double rebound. The Bulldogs now sit in second place in the Big East with a record of 8-4-2 (3-1-1).  Butler’s next game is Oct. 20 at home against No. 10 Georgetown.

The men’s tennis team competed at the Louisville Invitational Oct. 11-13. Butler’s Andrew Michael won the G singles flight. Thomas Brennan won the consolation side of the A singles flight. Brennan and Olof Wiklund went 1-1 in A doubles play losing to Kentucky in semifinals.

The women’s tennis team competed at the Western Michigan Fall Invitational Oct. 11-13. Freshman Logan White finished 2-1 in singles play. Kendal Wilby and Hallie Leblebijian both finished 1-2 in singles on the weekend. Nina Bertino and Roxanne Mackenzie began the week with a 6-3 win over Milwaukee and finished the weekend at 1-2.

The volleyball team earned a pair of conference wins this week.  On Oct. 11, the Bulldogs won 3-1 at home against St. John’s. Butler was led by senior Brooke Gregory who tallied 11 kills, eight blocks, and an ace.

On Oct. 12, the Bulldogs swept Seton Hall 3-0 for their second consecutive win.  In the dominant team performance, redshirt sophomore Melody Davidson shone again 11 kills and two blocks.  Butler’s record is now 7-11 (4-2). Ahead for the Bulldogs are a pair of road games against No. 13 Creighton and Providence.

The swim team competed at Illinois State on Oct. 12.  Freshman Hanna Pugh and sophomore Mattea Dumdey both earned first-place finishes for Butler in the 100 Backstroke and 50 Free respectively.  The next action for the team is Oct. 18 at home against Bellarmine.

In their conference home opener, the football team suffered a 42-7 loss to Drake on Oct. 12.  The start was ugly for the Bulldogs. Drake recovered a fumble on the opening kickoff before striking first early.  But late in the first quarter, a trick play helped set up a score for Butler to tie the game 7-7. From there, the game was all Drake, which scored 35 unanswered points behind 452 yards of total offense.  Next up, the Bulldogs will travel to Morehead State on Oct. 19.