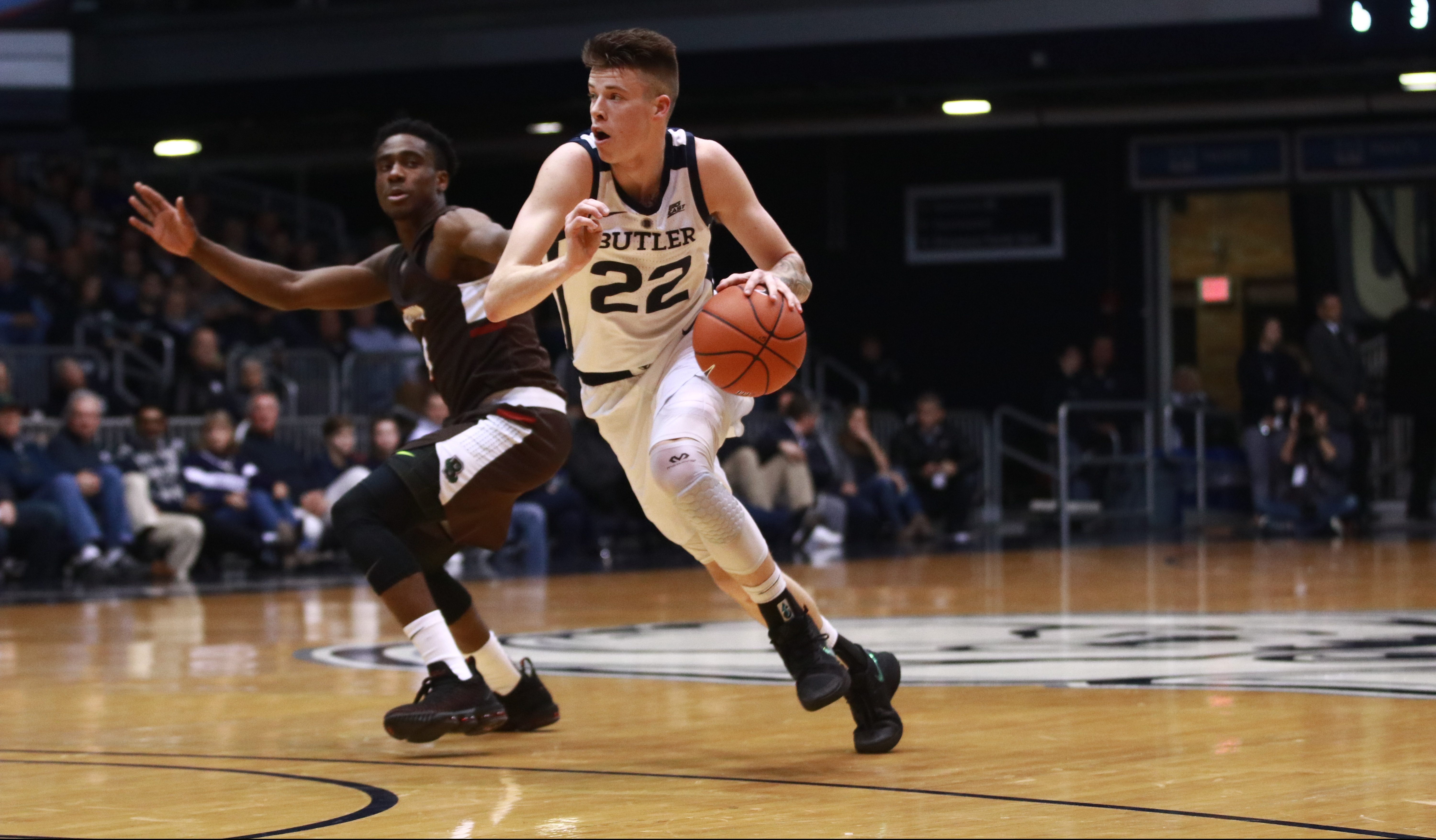 Sean McDermott drives to the basket during a game last season. McDermott led Butler in scoring with 18 points in the Bulldogs 70-40 win over IU Kokomo. Collegian file photo.

The women’s tennis team finished their fall schedule this week at the ITA Ohio Valley Regional.  The standout for the Bulldogs in singles was senior Lauryn Padgett, who went 3-1 in the tournament.  In doubles, two Butler pairings went 1-1.

The men’s golf team also closed out their fall season, finishing fifth in a 13-team field at the Musketeer Classic.  The Bulldogs were the highest finishers of the four Big East teams at the tournament. Senior Logan Sabins was Butler’s top performer and finished tied for 12th with a score of 216 (+3).

The women’s golf team finished fourth in a 12-team field at the Charles Braun Jr. Intercollegiate.  Teams only played 18 holes at the competition, after the first round was canceled due to rain. Junior Ally Ross tied for medalist honors with a score of 75 (+3) in Butler’s final tournament of the fall season.

The men’s soccer team played two games this week.  On Oct. 23, the Bulldogs lost 3-2 at Marquette. Butler did not start well, giving up an early goal before freshman Wilmer Cabrera Jr. scored a penalty to tie the game at 1-1.  But the Bulldogs fell behind again after surrendering goals both right before and right after halftime. A 67th-minute goal from senior Brandon Guhl ended the game 3-2.

On Oct. 27, the Bulldogs defeated Villanova at home 1-0 on senior day.  A defensive battle saw the game go to overtime tied 0-0. The Bulldogs found the winning goal off of junior Joel Harvey’s corner kick in the second overtime period.  After this week, Butler’s record moved to 9-5-1.

The women’s soccer team impressed with a pair of victories this week.  On Oct. 24, Butler defeated Providence on the road 1-0. The Bulldogs had the majority of the chances in this game, but strong goalkeeping kept it scoreless until senior Macy Miller’s goal in the 67th minute.

On Oct. 27, the Bulldogs returned home with a 3-0 win against Marquette.  All three goals came in the first half. Miller scored twice and freshman Alana Wood scored the third goal.

The men’s and women’s cross country teams finished their regular seasons at home in the Bulldog Invitational.  The women’s team finished second overall in the race. The top performers were Corinna Pena, who finished sixth, and senior Clare McCabe, who finished ninth.

The volleyball team had two home games over the homecoming weekend and finished with a win and a loss.  On Oct. 25, the Bulldogs fell to Villanova in five sets. Senior Brooke Gregory finished with 13 kills, five blocks, and an ace.

The football team got their first conference win of the season against Jacksonville 24-14 on homecoming.  Playing in a heavy downpour, the two teams totaled only 12 pass attempts. Jacksonville got out to a fast start, taking 14-6 lead in the first quarter, but the Bulldogs battled back to tie the game before halftime.  The second half was all Butler, as the Bulldogs scored 10 unanswered points. Sophomore running back Kavon Samuels rushed for 70 yards and a touchdown.

The men’s basketball team saw its first action of the season with a 70-40 win in an exhibition game against IU-Kokomo.  The Bulldogs looked comfortable throughout and all 11 players who entered the game for Butler scored. Senior Sean McDermott was the leading scorer with 18 points.