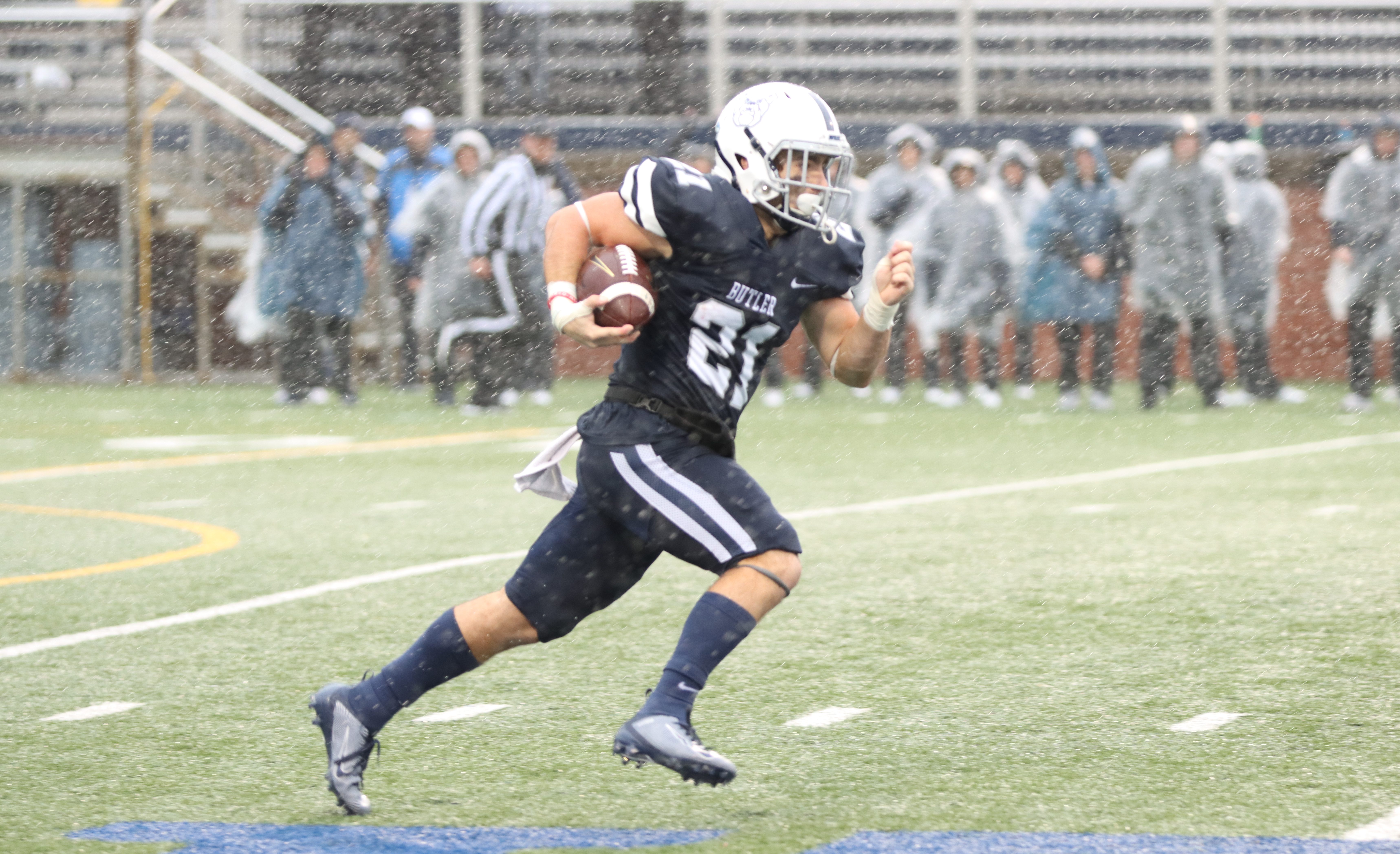 AJ Deinhart makes battles the elements as he carries the ball up the field in Butler’s win over Jacksonville on Oct. 26. Photo by Chandler Hart.

The Butler football team was victorious over the Jacksonville University Dolphins 24-14 on Oct. 26 during Butler’s homecoming weekend. The Bulldogs improved to 2-6 while the Dolphins fell to 2-6.

It was a wet one at the Sellick Bowl for the homecoming contest as the rain did not let up all game. This led both teams to stick with the ground game for the day.

The Bulldogs were able to get a score of their own as an interception by Devin Aguilar set up Kavon Samuels for an eight-yard score. Butler would miss the PAT, leaving the Bulldogs trailing 7-6.

Jacksonville would respond quickly as a big run by Calvin Turner Jr. would set the Dolphins in the red zone. This led to Turner taking it in from two yards out for a touchdown, extending the Dolphins lead to 14-6.

The Dolphins offense would stall early in the second quarter as penalties would kill their drive, followed by a fumble that was recovered by Luke Sennett for the Bulldogs.

The Bulldogs would take advantage of the turnover and start a momentous drive. After surviving two fumbles, the Bulldogs were able to set up for a field goal. Drew Bevelhiemer was roughed on the kick, giving the Bulldogs a 1st and goal.

Brad Sznadjer would punch it in for the Bulldogs from three yards out, followed by successful two-point attempt from Cameron Towns to Austin Schwantz. That tied the game at 14-14 heading into halftime.

Towns took over for Nick Orlando at quarterback for the final drive of the second quarter and the second half.

Butler’s defense would stand tall in the second half as they were able to stop the Dolphins on a 4th and 1 just outside the Bulldogs redzone. This led to a 32-yard field goal by Bevelhiemer which gave Butler the 17-14 lead.

Later in the quarter, the defense would come through yet again with a fumble recovery by Dan DelGrosso.

This would set up a score in the fourth quarter by Sznajder from two yards out, extending their lead to 24-14.

The Bulldogs would manage to stave off any comeback attempt by the Dolphins, giving Butler the victory.

The Bulldogs snapped their five-game losing streak with the victory.

Butler will hit the road next weekend as it will travel to New York to take on the Marist University Red Foxes on Saturday, November 2 at noon.