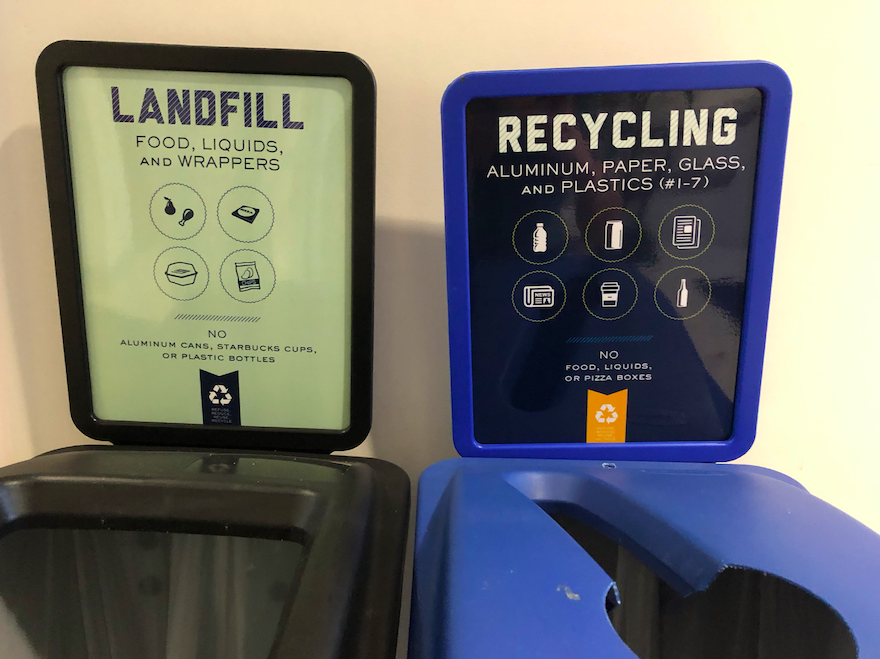 Butler University’s campus Starbucks no longer uses straws in an effort to minimize non-recyclable plastic waste, but are Butler students properly using the recycling system that is in place?

Butler has been recycling since before Dick Hamm, the director for building services, started working at Butler in 1991. Hamm said the recycling system improved around 2006.

Hamm said Butler applied for a grant through the Indiana Department of Environmental Management, and used the $25,000 they received towards the purchase of additional waste and recycling stations. The purchase of these stations in 2006 helped improve Butler’s recycling program.

This year there are about 200 recycling stations spread throughout campus. These stations include both recycling and trash bins as well as signs indicating what can and cannot be recycled. Although Butler’s recycling system has grown over the years, it still is not perfect.

“The biggest [problem] is contamination, because when recycling is contaminated then we can’t, of course, send it on to recycling,” Hamm said. “It then becomes trash.”

Butler switched to a single stream recycling system in 2011, which means plastics, cardboard and glass can all be recycled in the same bin.

Hamm said that with this system of recycling, contamination can come from leftover food particles that are thrown into the recycling bin, contaminating its previously recyclable contents.

“Basically our staff doesn’t have time to clean those items and hand pick those items,” Hamm said. “There is just so much already for them to do…so it becomes regularly picked up as trash.”

Jamie Valentine, the assistant director of the center for urban ecology and sustainability, explains why recycling is not as simple as it seems.

“Not all plastics are created equal, and I think that’s confusing for people who say, ‘this is plastic, it’s recyclable,’” Valentine said. “It might not be recyclable in a facility that we have in Indianapolis.”

The majority of plastics have numbers on them, which signifies the type of plastic the object is made out of. This number can typically be found on the item, located inside a small recycling symbol. Butler recycles all plastics numbered one through seven, as well as cardboard and glass.

Jesse Van Gerven, a science technology and environmental studies lecturer, said it is better to be cautious than hopeful when it comes to recycling.

“You would think when in doubt, well, recycle and hope for the best, but it’s exactly the opposite,” Van Gerven said. “When in doubt, chuck it.”

When non-recyclable items make their way into recycle bins, it is not cost effective for the recycling companies to sift through, which can lead to the entire batch of recycling being thrown away.

Jarrod Koester, a senior history major and the Green Council executive chair, said Green Council has put an emphasis on signage in the past few years. These signs help clarify what is accepted in both trash and recycling bins.

Once items are recycled, the bins are emptied and taken to receptacles, or larger recycle bins, located outside of the academic buildings.

These recycle bins are then collected by Ray’s Trash Services, which provides Butler with their recycling services and a composting route.

The composting route came from a grant that was awarded to IUPUI and Butler in 2016. Butler applied for this grant through the Association for the Advancement of Sustainability in Higher Education. When Butler and IUPUI won the grant, it allowed the two universities to work together to form the first composting route in Indianapolis.

Butler’s first goal is to minimize the number of items that are being recycled by encouraging students to use reusable cups and bottles, and eliminating single use plastics.

“I also firmly believe that recycling is one of the lower steps that we want to take, in that we should be prioritizing waste minimization and not creating something that needs to be discarded and or recycled and instead use reusable, washable materials,” Valentine said.

Van Gerven explains what people should be doing alongside recycling.

“Back when I was a kid there was this old saying, reduce, reuse, recycle… those were arranged in order of importance,” Van Gerven said. “Recycling was the last one. Reduce, reduce consumption, reduce their usage of single use plastics, reduce the amount of waste that you generate. Reuse as much as you can… recycling is the last one in there for a reason.”

Van Gerven said recycling is not necessarily as good as it was once thought to be, and there are broader questions about its effectiveness.

“If people don’t understand the limits of recycling — believing incorrectly that it’s a much more efficient system than it really is — then it might in fact counterintuitively lead people to start consuming more and wasting more than they would if they didn’t think recycling is doing more than it is,” Van Gerven said.

While recycling is provided in academic buildings and dorms, seniors living off campus, and some Greek houses do not receive recycling services.

Hamm said there are still options for students that live nearby.

Hamm said fraternities and sororities have reached out to him in the past, asking if it was possible for them to recycle items on campus. Butler will accept students’ recycling as long as they are not contaminated items and the items are placed in the proper bins.

“Folks are welcome to bring their items to campus and have them recycled,” Hamm said.

Students with questions about Green Council and sustainability on campus can email Jarrod Koester at jekoeste@butler.edu. Suggestions and ideas are welcome as well.