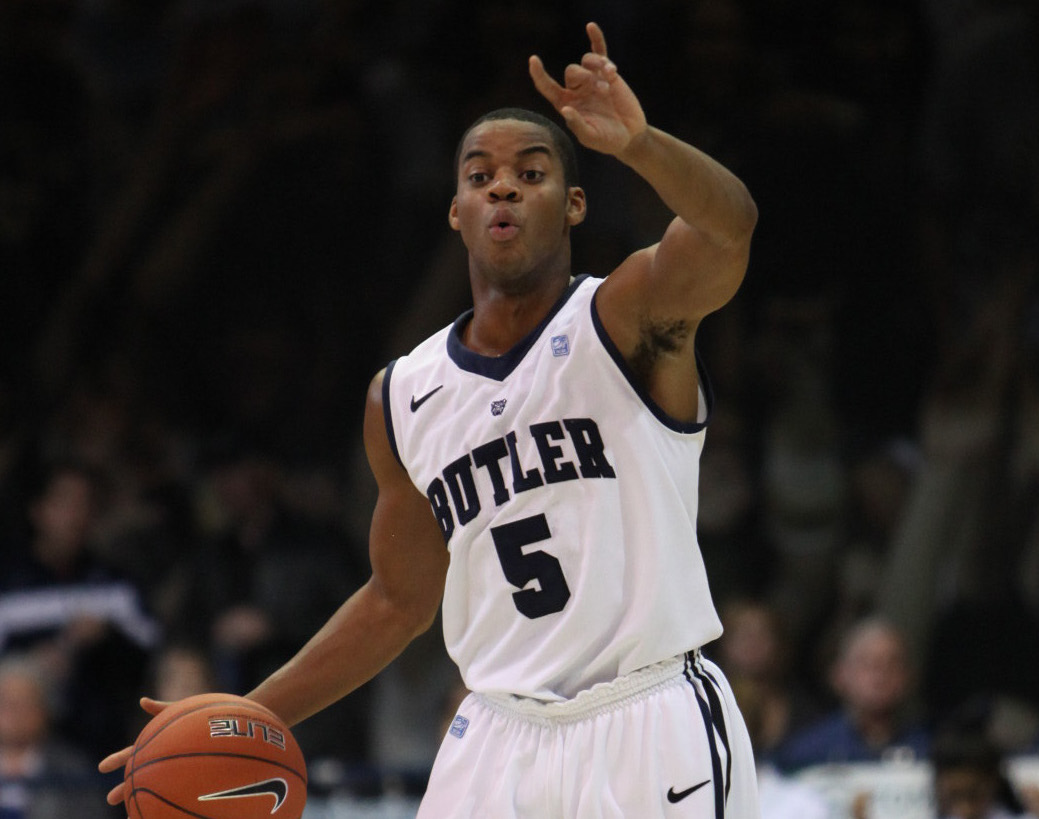 Ronald Nored calls a play in a game during the 2011-12 season. Collegian file photo.

Ten years have changed the course of each players’ personal career. Ronald Nored, in particular, was once the defensive minded, pace-setting floor general for Brad Stevens. Nored’s journey to the NBA is not as well-documented as Stevens or Gordon Hayward, but may be just as wild.

Beginning as Brownsburg High School’s head basketball coach, Nored is one of the youngest coaches in the NBA, entering his second season as a 29-year-old assistant coach with the Charlotte Hornets.

Nored remembers his time at Butler very fondly, and still supports the blue and white he wore on the court. He was a part of one of Butler’s best recruiting classes ever, arriving on campus in 2008 at the same time as future NBA players Hayward and Shelvin Mack.

Nored recalls the second championship run being tougher than the first. In both seasons, the entire Butler team knew how good they could be, but Nored said there was a lot of adversity in his second runner-up season.

Following the 2010 season when Butler nearly beat Duke University in the NCAA Championship game — when Hayward’s half-court heave at the buzzer came just inches away from putting the Bulldogs on top of the basketball world — both Willie Veasley and Avery Jukes graduated, while Hayward left early to enter the NBA draft.

“The reality is we struggled a lot that year,” Nored said. “We all lost three games in a row for the first time in any of our careers. But I think all of that adversity led to us getting on the same page, bonding together and making that run in the tournament. The reality is, once you get into the tournament, you get past the first game, it’s pretty much anybody’s tournament from there.”

After graduating in 2012, Nored took a job as Brownsburg High School’s head basketball coach at just 22 years old. Just a year later in 2013, Nored got offered a position with another former Butler alumnus, Matthew Graves, as an assistant coach at South Alabama.

“I was really fortunate to have that opportunity,” Nored said. “Obviously I played for Brad for four years and our relationship had really grown over that time.”

Yet, being a head coach for a professional basketball team at just 23 years old was challenging. Some of the players were older than he was, but Nored figured himself lucky to be given a chance so early in his career.

The following season, Nored became Stevens’ player development coach with the Celtics. As his first job with an NBA team, Nored worked a lot with the Celtics’ younger players.

In 2015, Nored returned to college basketball as an assistant coach for the Northern Kentucky Norse. But, it wasn’t long before Sean Marks, Brooklyn Nets’ General Manager, inquired about Nored becoming the head coach of their G-League affiliate, the Long Island Nets. Nored happily obliged and coached the Nets from 2016 to 2018.

Looking back on his journey to becoming a head coach once again, Nored said his time since being a Butler Bulldog has changed his life.

“That experience has changed my career; it’s changed my life in many ways,” Nored said. “I’ve seen things in a much different light after having head coaching experience.”

On May 28, 2018, Nored joined the Charlotte Hornets as an assistant coach.

Hornets veteran Cody Zeller was particularly ecstatic about Nored’s hiring, stating in a recent tweet that he almost attended Butler University to play alongside him.

“He’s a guy that I wanted to go to battle with every night,” Zeller said in the tweet.

The Hornets appointed Nored as their 2019 Summer League head coach. There he became familiar with many of the young players on the roster, including rookies PJ Washington, Caleb Martin, Cody Martin, and returning players Dwyane Bacon, Miles Bridges, and DeVonte Graham.

Nored is excited to see how Graham performs in the league next season, along with other returning young prospects Bridges and Bacon.

After seven years of bouncing between the NBA and NCAA, the next logical step in Nored’s coaching journey would be a head coach position. The path he is currently on certainly makes that a possibility.