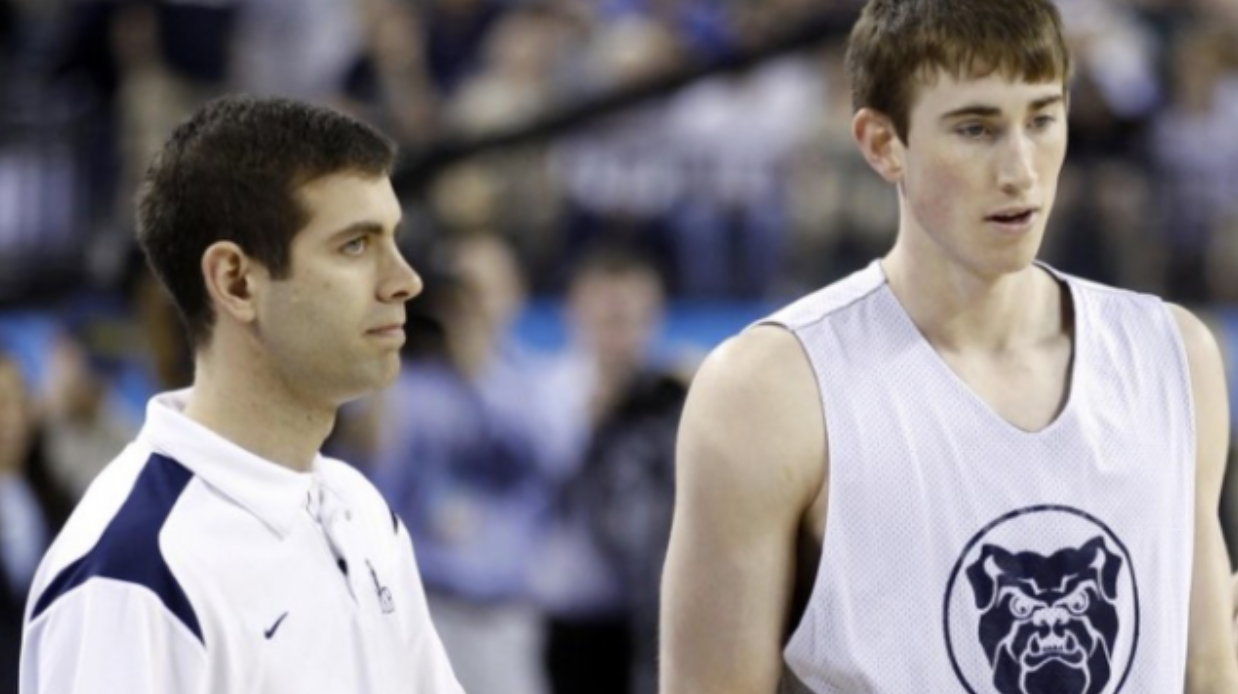 The bond formed at Butler between Brad Stevens and Gordon Hayward helped the Celtics land the all-star. Photo from Butler Athletics.

Boston fans have been waiting for a player like Gordon Hayward for a long time. Ever since the core of Kevin Garnett, Ray Allen and Paul Pierce left the Garden, the team has been searching for an identity. Recently, head coach Brad Stevens helped manufacture a winning culture in Boston, but the team has yet to find its true personality.

With all the trade rumors and uncertainty, how could they? The constant talks surrounding president of basketball operations Danny Ainge, have included nearly every player on the Celtics current roster. How can a team bond and grow together when any player could be traded at any moment?

After a five-year rebuild, the Celtics finally found their identity, and it exists in Gordon Hayward.

The former Butler star who led the 2010 squad to a national championship game is reuniting with his former head coach. Hayward’s competitiveness and skills will make the Celtics an immediate threat to dethrone LeBron James and the Cleveland Cavaliers in the Eastern Conference.

But the most noteworthy attribute Hayward will bring to the Garden? His unselfishness, work ethic and drive he adopted in his time at Butler under Stevens.

Yes, the Butler Way has landed in Boston.

In his fourth year as head coach, Stevens now has the prize player, the All-Star, the centerpiece he can build a team around to compete for a championship. The relationship they shared at Butler was the deciding factor in Hayward’s decision to sign a four year, $128 million contract with the Celtics.

The two forged an incredible bond in their time at Butler, and Hayward could not pass up an opportunity to rejoin the man that helped him rise to the fame and fortune of the NBA.

Stevens was the lead recruiter for the Brownsburg native whose top three schools were Butler, IUPUI and Purdue, the alma-mater of both his parents. When he chose Butler, it was a huge win for Stevens. To pass on a Big Ten program for a tiny Horizon League school meant something. He wanted to play for Coach Stevens.

The bond would only grow his freshman year at Butler, as did the skills of the now 6-foot-7 forward. In 2009-10, Butler won the Horizon League and walked into the NCAA tournament as a five seed behind Stevens and Hayward. After knocking off the likes of Syracuse, Michigan State and Kansas State, the Bulldogs faced off against Duke in the national championship game.

“It’s the biggest moment in Butler basketball history on the biggest stage in the world, and who did Brad choose to get the ball to in that moment? It was Gordon. I think that tells you everything you need to know about how Brad felt about him,” McGrath said in an interview with the Boston Globe.

The Stevens-Hayward connection is a product of the Butler Way and the culture inside the Butler basketball program. They have not forgotten their time at Butler, as both remain involved in the program. Stevens makes multiple visits every year to watch games, or to practice inside Hinkle when the Celtics are in town to play the Pacers.

Hayward donated a hefty sum of money to the program to build a state-of-the-art film room in the Bulldog locker room.

As time passed, their relationship only got stronger. Even though the two haven’t teamed up since 2011, the bond still thrives. This bond is why Hayward will be wearing Celtic green in 2017.

Hayward mentioned his trust in Stevens in his Players Tribune article announcing his decision to leave Utah.

“I had a decision to make: Should I leave my comfort zone at Butler and move on to the NBA? Or should I stay another year… But there was one person who I knew I could talk to about it from every angle, who I knew would give me the smartest and most honest perspective available: Coach Stevens,” Hayward said. “And I guess it’s pretty crazy. Because seven years later, I had to make an even tougher decision — and again, Coach Stevens and I found ourselves at a crossroads together. And again, he was the person I knew I could count on the most.”

Stevens knows that without Hayward the Celtics might not have called him, and Hayward knows without Stevens he may be at a desk somewhere instead of in an NBA locker room.

The Celtics have desperately needed a player like Hayward to lead them not only in the box scores, but in the locker room. Hayward is soft-spoken, competitive and hard-working. He is the type of player Boston fans love to cheer for like Paul Pierce, Larry Bird and Bill Russell.

Yet people overlook the fact that the last time Hayward played for Stevens they lost to Duke in the national title game. It was hard for both to get over the pain of that loss, and that pain is yet another reason why Hayward decided to come to Boston.

The goal was to win a title at Butler, but things got in the way. Hayward wants to be a champion, and that is why he is going to Boston. He cares about winning, not money. He passed on the Utah Jazz and the Miami Heat, who both could offer more money, to join Stevens because he knows they can win together.

Hayward remembered this goal, and cited it as a key reason he is joining the Celtics

“And that unfinished business we had together, back in 2010, when I left Butler for the NBA … as far as I’m concerned, all of these years later, we still have it,” Hayward said. ”And that’s to win a championship.”

Hayward’s signing instantly makes Boston one of the most exciting teams in the NBA. With him, Boston is now the favorite to push past the Cavaliers. Celtics fans can now rejoice. Hayward has landed and will not stop until an 18th banner is raised in the rafters at the Garden.

But who must Boston fans really thank for the signing of Hayward? The answer is Butler University. Stevens fostered a new culture in Boston. This culture helped Boston win 53 games, advance to the Eastern Conference Finals and sign Hayward. This same culture was created under the teachings of the Butler Way.