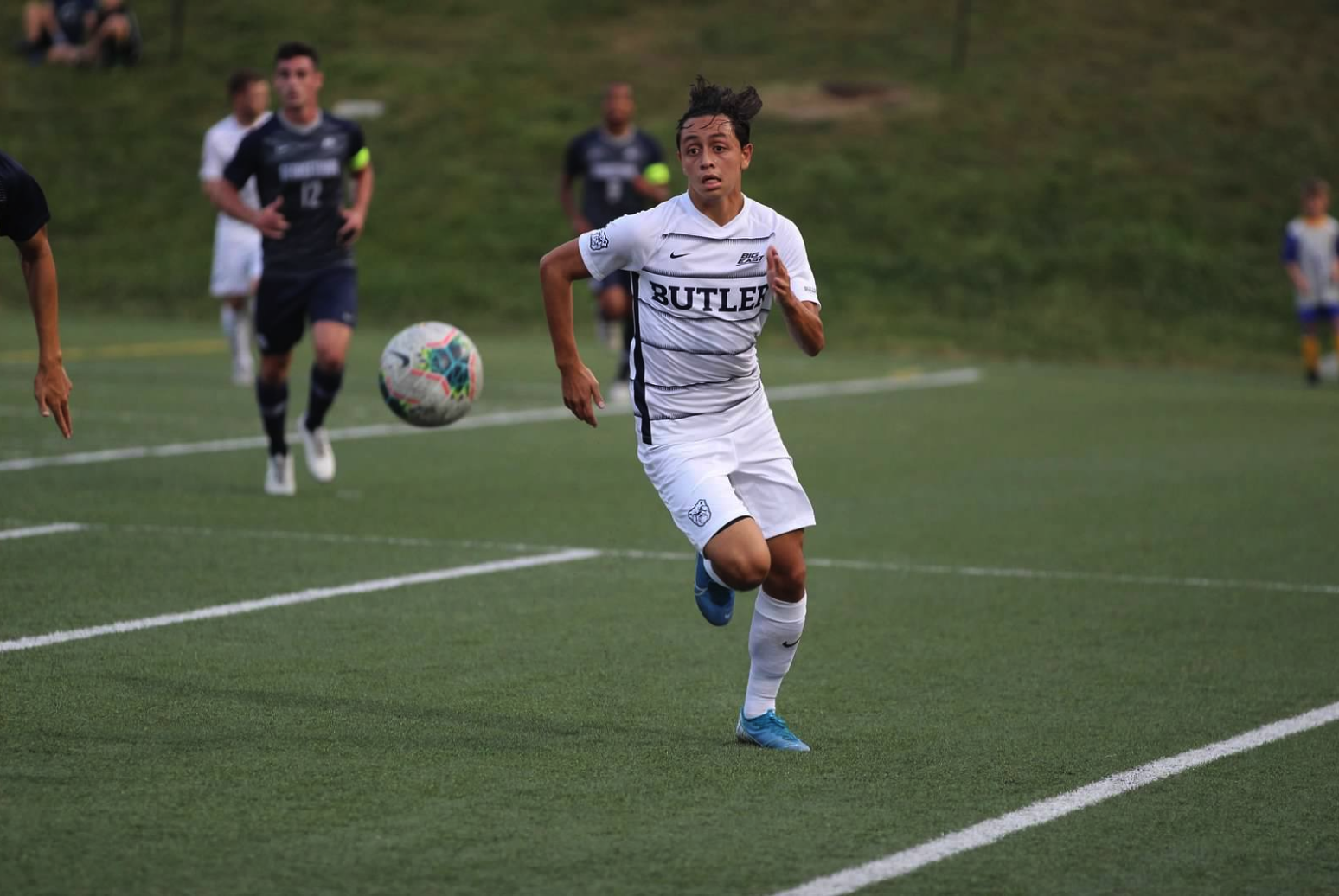 Wilmer Cabrera Jr. runs down the sideline in a game against Georgetown on Sept. 20. The Bulldogs fell to the Hoyas 3-0 at the Sellick Bowl. Photo by Chandler Hart.

Women’s golf will travel to Burlington, Iowa for the MVC Fall Preview. It is a two-day event that will take place at the Spirit Hollow Golf Resort which is a par 72 regulation course. The Bulldogs finished 12th of 17 teams at their last tournament, the Redbird Invitational.

Women’s golf will finish the event with day two of the MVC Fall Preview.

Men’s soccer will start their tough week against No. 4 ranked rival Indiana University at the Sellick Bowl. The Bulldogs are now 3-3 after a hard fought 0-3 loss to No. 3 Georgetown. The Hoosiers are now 4-0-2 after a 3-1 victory against Big 10 opponent Wisconsin, who Butler already beat 1-0 this season. The Bulldogs lost to the Hoosiers 0-3 last year. Be sure to make it to the Sellick Bowl for a 7:00 p.m. kickoff that you won’t want to miss. The game will also be available on Facebook live.

Volleyball will start off Big East play in Milwaukee, Wisconsin, against Marquette. The Bulldogs are coming into Big East play 3-8 after a 1-2 finish in the Bulldog Brawl. Marquette is entering Big East play 10-2 on a four game winning streak. Butler lost to Marquette 0-3 in both matches last season. First serve is set for 12:30 p.m.

Men’s cross country will be in Earlysville, Virginia to race in the Panorama Farm Invitational. The men’s 8,000m race starts at 9:30 a.m. at the Panorama Farms. In their last meet, the Bulldogs placed first out of four teams at the Butler Twilight.

Women’s swim will host Xavier, St. Louis, and Evansville in the Butler Double Dual. The event will take place in Fishers, Indiana starting at 12:00 p.m.

After a double overtime 0-0 tie against Utah, women’s soccer will kick off Big East play at Seton Hall. Butler is entering Big East play 5-3-1. Seton Hall will enter Big East play 1-5-1 after a 1-2 loss at Delaware. The Bulldogs beat the Pirates 3-0 last season. Kickoff at Owen T. Carroll Field in South Orange, N.J. will be at 1:00 p.m. You can watch the game on BEDN.