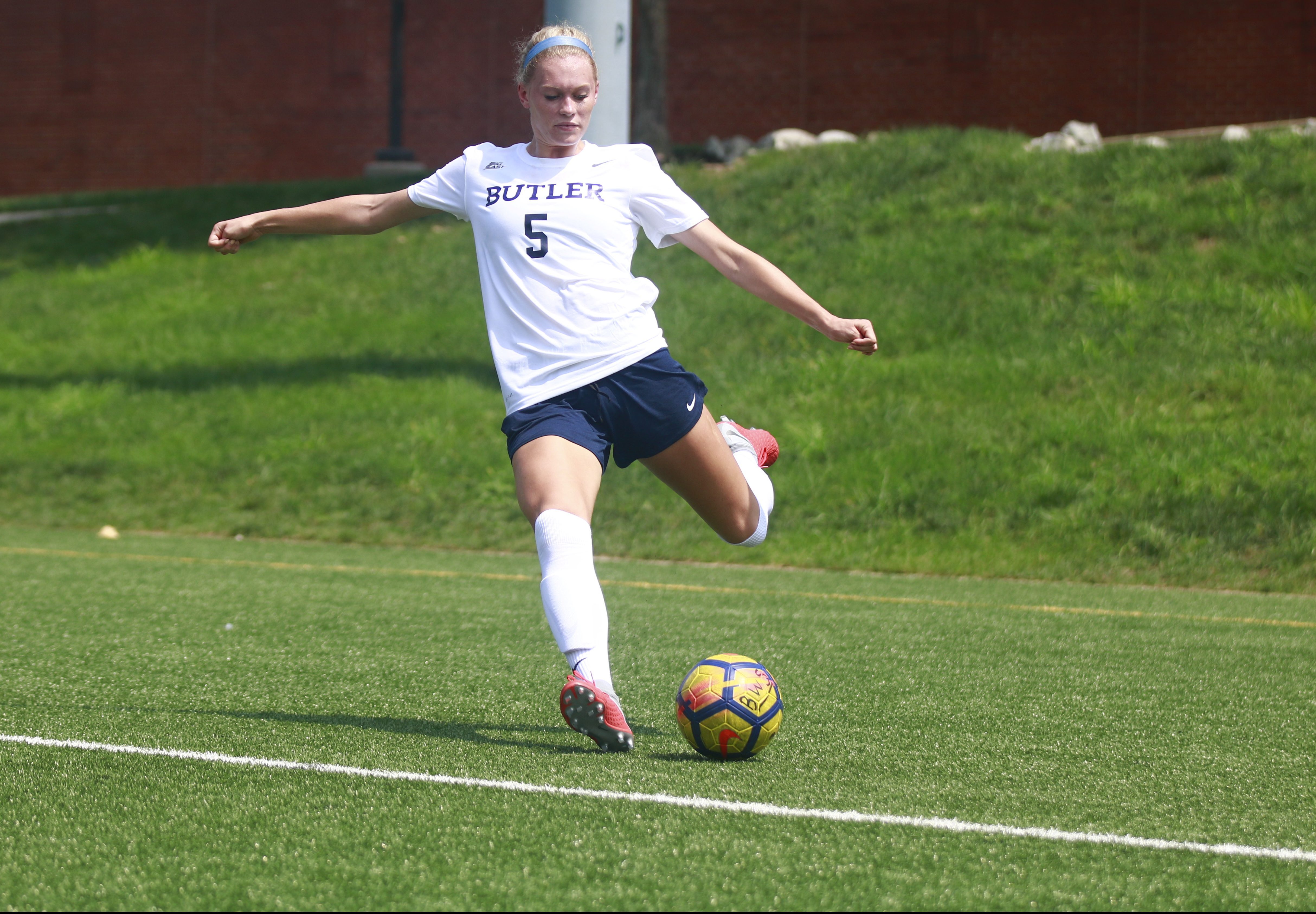 Amanda Kowalski kicks the ball during a game. Kowalski and the rest of Butler’s defense gave up zero goals for the fourth time this season. Collegian file photo.

The Butler women’s soccer team moved to 6-3-1 on the 2019 season with a 3-0 win over Seton Hall on Sept. 29. The win gave the Bulldogs a 1-0 start to Big East play for the fifth consecutive season. Here’s what we learned:

Butler has dominated both the shot count and time of possession in several matches this season. Their downfall on a couple of those occasions was that they let their opponents hang around and take advantage of the few chances Butler allows them. (In their match against Illinois, Butler outshot the Illini 20-4 but lost 2-1.)

The Bulldogs led the first half shot count 16-5 and controlled the majority of possession, but Butler’s lone goal came from Macy Miller back in the third minute. Seton Hall nearly tied the game on a couple of occasions.

The Bulldogs negated any chance of a Pirates win with a second half scoring surge. Butler was able to “sink the Pirates’ ship”, if you will, behind a pair of second half goals. Katie Soderstrom (48’) and Payton Black (89’) scored for the Bulldogs.

Butler has been dangerous this year off of corner kicks. This has been especially true when Katie Soderstrom has taken them for the Bulldogs.

In this match, Butler had a whopping 15 corner kicks.

At one point late in the first half, Butler was awarded three corner kicks in the span of just a minute. The Bulldogs weren’t able to find the back of the net but they did generate a good amount of offensive pressure.

Black’s goal in the 89th minute came off a corner kick from the near side.

3. Continued dominance over the Pirates

Since joining the Big East, Butler has absolutely owned its series against Seton Hall. That trend continued in this matchup. The Pirates have beaten Butler just one time, a 3-1 decision in 2013, since the Bulldogs joined the Big East. In the last three matchups, the Bulldogs have outscored Seton Hall 6-0 en route to a 1-1-1 record against the Pirates in that stretch.

But co-head coach Tari St. John gave credit to the Pirates in her postgame interview on the Big East Digital Network. She noted that Seton Hall was “much improved” in comparison to previous seasons. The Pirates, who have a new head coach this season, are coming off a 2-12-4 record last year and haven’t won a Big East conference game since 2016.