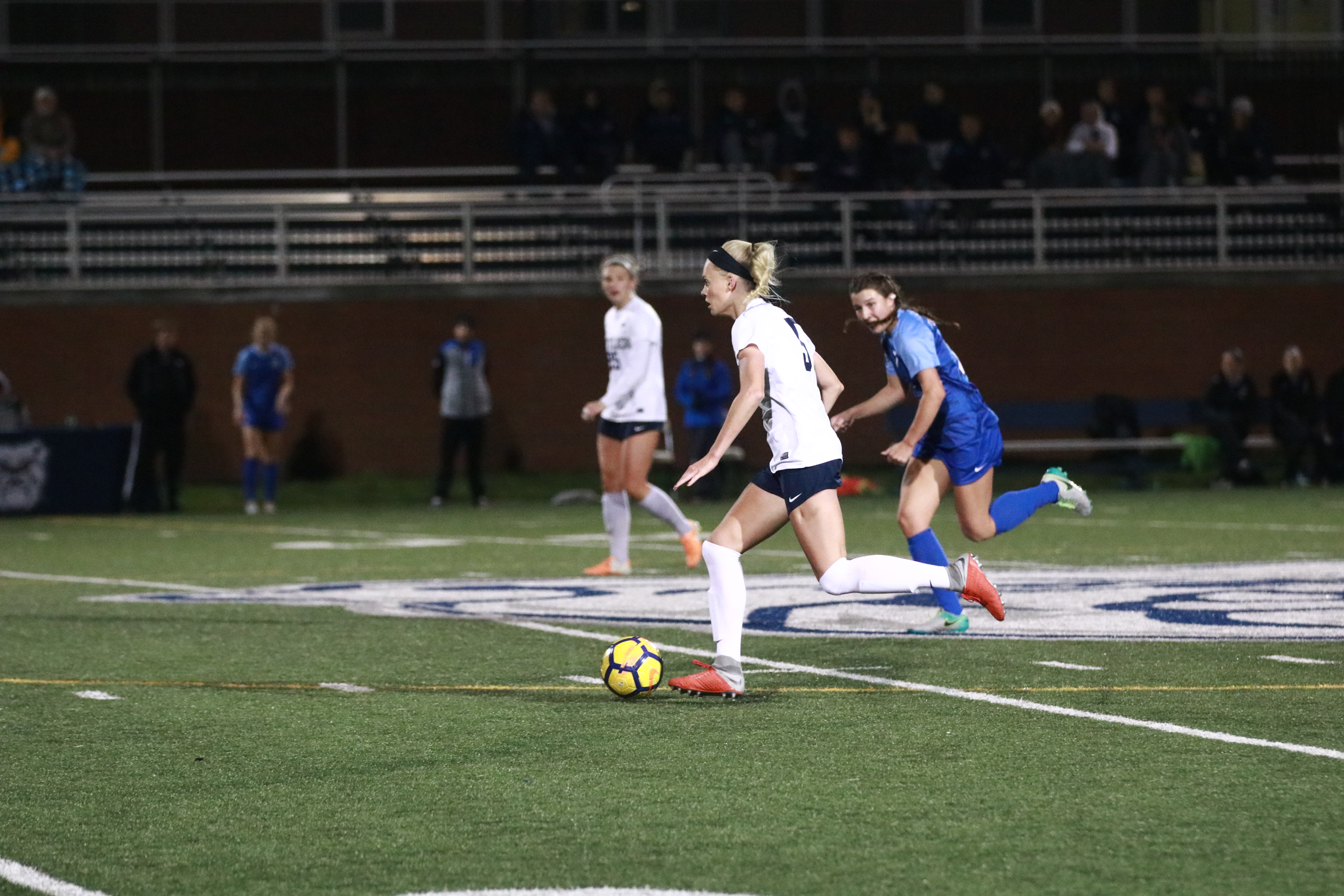 Amanda Kowalski brings the ball down the field during a game last season. Kowalski played 67 minutes in Bulldogs’ loss to No. 15 Wisconsin. Collegian file photo.

The Butler women’s soccer team fell 2-1 in overtime to No. 15 Wisconsin on Sept. 1 for their first loss of the 2019 season. The Badgers were able to sneak past the Bulldogs off a goal in the 96th minute. Here’s what we learned:

Under co-head coaches Tari St. John and Rob Alman, the Bulldogs have rarely beat themselves. They have been even less prone to do so in the crucial moments. But that’s exactly what ended up hurting the Bulldogs in their loss to the Badgers. Post game, Alman spoke highly of how the Bulldogs played through the first 90 minutes, saying “there were a lot of things that we were able to do at a high level today.”. But he wasn’t coy in saying how poorly Butler played in overtime. The Bulldogs committed three “silly” and “uncharacteristic” turnovers in front of the net in the final five minutes that resulted in scrambles, commotion and ultimately the Badgers’ golden goal. Goalkeeper Stephanie Rodriguez was able to save the Bulldogs on the first two. She was not so lucky come the third time around.

Until their matchup with the Badgers, Butler had yet to play a team that had finished in the Top 50 of the NCAA women’s soccer RPI ratings last year – or the Top 100 for that matter. Mid Major wins are a good way to start the season, but the Badgers are a different animal when compared to Morehead State, IUPUI and Northern Kentucky. Butler showed no sign of letting up when facing the highly touted Badgers on the road. Butler showed poise with possession control in several points throughout the match and even scored the first goal of the day – a header goal from Annika Schmidt. Butler’s back line was stout, especially during the opening minutes, as the Badgers outshot Butler 21-8 in the match. In just her fourth career start, Rodriguez was tested more than she has ever been as a Bulldog. She showed several highlight reel saves, including a diving save in the 73rd minute off a long ball from the Badgers. Alman had this to say after the game: “To do that against an opponent like this, I think, puts us in good standing for some of the opponents we have coming up.”

Alman noted that the loss to the Badgers “stings” but was quick to add that the Bulldogs “have about 40 minutes to dwell on today and then they must move on to next week.” Butler’s schedule offers little room to ponder the loss to the Badgers. The Bulldogs will take on Big Ten foe Michigan State on Sept. 5 before traveling back to Wisconsin to take on Wisconsin-Milwaukee, an NCAA tournament team from a year ago, on Sept. 8. They will host another NCAA tournament team, Illinois, the week after that.