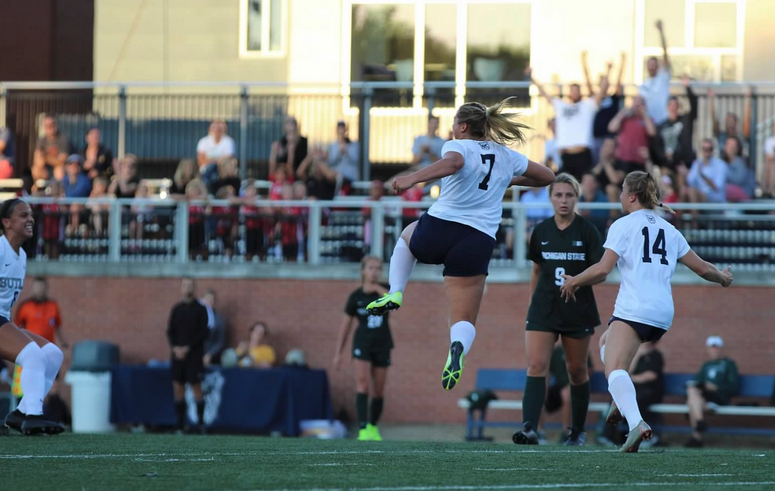 Anja Savich celebrates following her goal in the 20th minute of Butler’s 3-0 win over Michigan State on Sept. 5. Photo by Chandler Hart.

The Butler women’s soccer team defeated Michigan State 3-0 at home on Sept. 5 behind two goals in the first half and yet another strong defensive performance. Here’s what we learned:

1. Katie Soderstrom is showing signs of a breakout year

Butler is 4-1 on the year and Katie Soderstrom has played a huge part in the Bulldogs getting out to such a quick start. Through five matches, Soderstrom has already surpassed her goals and assist totals from the 2018 season. With her dish to Macy Miller in the 28th minute against the Spartans, she notched her sixth assist of the year. Her assist number is currently tied for the best mark in NCAA Division I. Soderstrom also scored a goal in the 70th minute, her third of the season. She is currently on-pace for just over 15 assists this year — a number that would break Butler’s school record for assists in a season. Amy Morrison notched 14 assists for the Bulldogs back in the 2001 season and currently holds the record.

Soderstrom has either scored or assisted on nine of Butler’s 13 goals this season. Postgame, she noted that getting her freshman season out of the way has allowed her confidence to be at an all-time high this year.

2. Butler’s back line was stout

At this point it may sound like a rerun, but Butler’s defense was stifling in another home win. The win over the Spartans was the Bulldogs’ second shutout of the season and their 15th shutout at home since the start of the 2017 season. Aside from a short stretch midway through the second half, Michigan State had very little to work with in their loss to Butler. The Spartans were limited in their clear chances and were outshot 15-6. Goalkeeper Steph Rodriguez was really only tested once, and she pulled through for the Bulldogs. In the 11th minute she came up with a diving stop off a shot from straight on.

One of Butler’s toughest non-conference tests awaits them Sunday afternoon as the Bulldogs travel to take on Wisconsin-Milwaukee. For many, their name might not be too familiar, but the Panthers were an NCAA tournament team a year ago. Milwaukee, a member of the Horizon League, has compiled a 48-8-7 record over the last few years and only lost a pair of games last season. Milwaukee returns their top four goal scorers from a year ago, including Horizon League Freshman of the year Haley Johnson. Alman said he “expects nothing easy” from the Panthers especially when playing away from home.

#buws took down Michigan State tonight 3-1 at the Sellick Bowl.