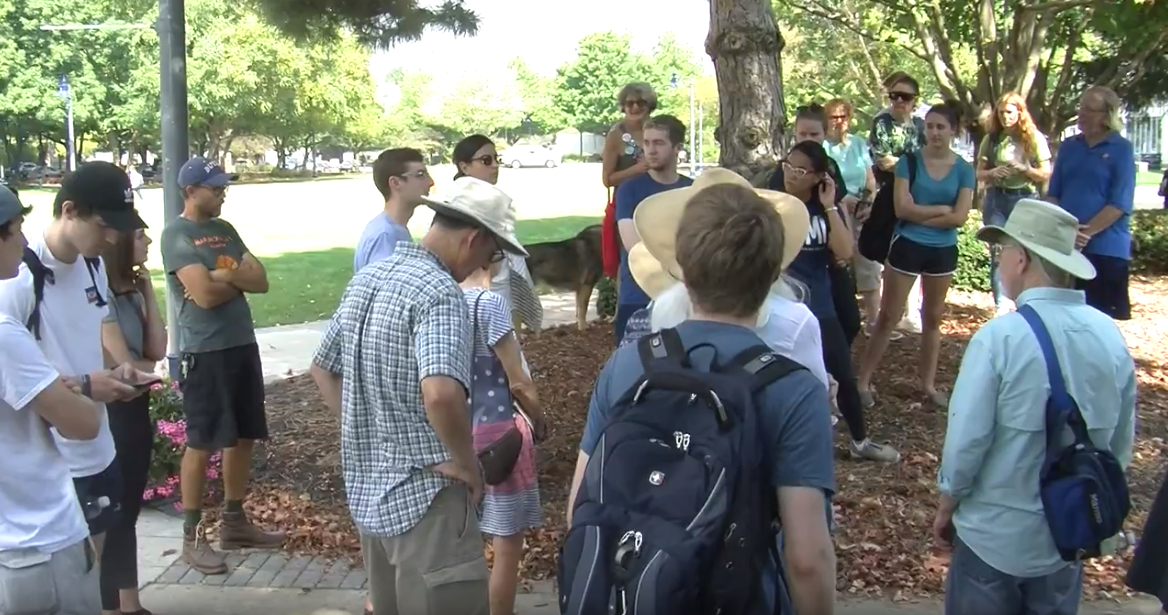 Members of the Butler community participate in the climate strike. Photo by Manny Alarcon Nava.

Editor’s note: A previous version of this story said the Center for Urban Ecology and Sustainability organized and was responsible for the climate strike held on Sept. 20. CUES was not responsible for the strike; while it was pitched to CUES’ student interns, they organized the strike not in their capacity as interns but as students. The strike was completely separate from CUES.

Sept. 20, 50 or so members of the Butler Community met at Star Fountain. 12:05 p.m. came and they were still waiting. So did 12:10 p.m. and 12:15 p.m. They were waiting on a climate change strike to start, announced and organized by the Center for Urban Ecology and Sustainability.

But nobody from CUES came.

CUES’ strike at Star Fountain was inspired by Greta Thunberg, a 16-year-old Swedish activist who called for global strikes. According to Vox, there were over 2,500 events scheduled in over 163 countries on all seven continents, including one in downtown Indianapolis.

The strikes were protesting climate change and forcing governments to take the necessary steps to stop it.

Jamie Valentine, assistant director of CUES, said that she had very little to do with the Butler strike.

Torey Kazeck, a junior biology major, said Valentine simply introduced the idea to CUES, and the student interns did the rest of the organizing, like announcing the strike on social media.

When it was clear that no one from CUES was coming to initiate the strike, Camille Ringenberg, a sophomore music education major with no connection to CUES, started a chant just to get the crowd to do something.

“Climate change is not a lie! Do not let our planet die!”

All 50 people joined in unison. Then, Ringenberg started a march across campus.

Other people in the march started a call-and-response chant midway through the march.

“What are we doing?” People called out.

After the strike, some students were unimpressed with the lack of preparation that went into the strike. Kendall Sagear, a first-year biology major, felt the strike started slow, but worked out in the end.

Ringenberg wished there was more planning.

“I wish there was more publicity beforehand to get more people active,” Ringenberg said.

If students are interested in more information, there are several Butler organizations that focus on saving the environment. Sustainability club raises awareness for these issues and carries out projects on campus. The newly formed Green Council is a place for students to submit initiatives to make the school greener.