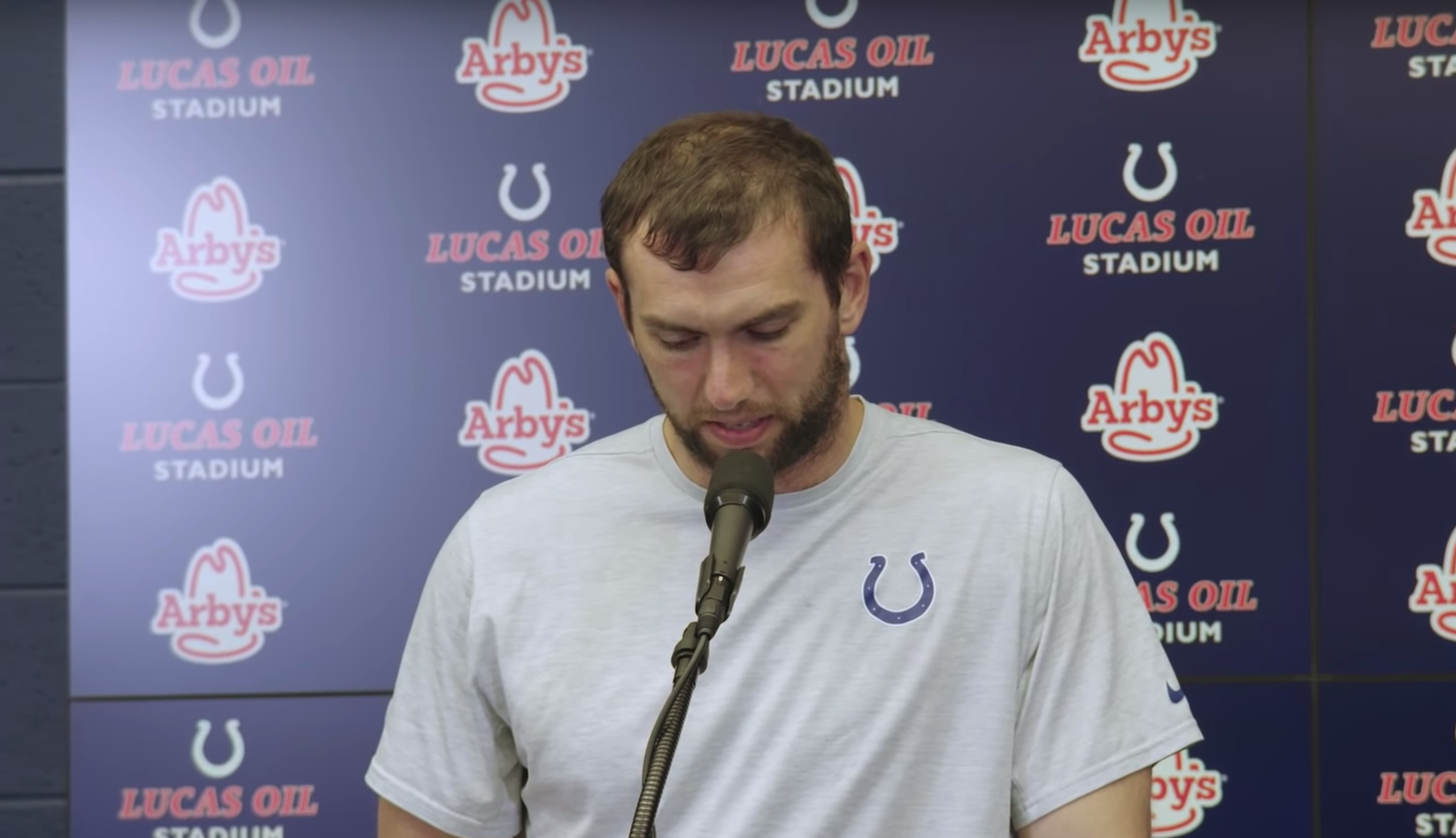 Andrew Luck addresses the media after news of his retirement at the age of 29. Photo courtesy of the Indianapolis Colts / Youtube.

On Saturday, Aug. 24, Andrew Luck broke the internet. The 29-year-old announced he was retiring from football, just weeks away from beginning his seventh season in the National Football League.

People are mad. Like, really mad — and some of them with good reason. Newly acquired season ticket holders feel cheated, having paid for a season that can no longer exist. Local Indianapolis media have questioned Luck’s competitiveness and whether or not he is “real.”

There have even been, quite frankly, ignorant statements saying that just because Luck was a football player, and not a teacher or a coal miner, he is not entitled to make the decision that is best for him.

I cannot begin to tell you how irrelevant everyone else’s input is.

To be fair, I have no issue with people being upset about their season tickets — completely reasonable. While I don’t have enough of an affection for the Colts to have season tickets, I can understand that frustration. That’s all fine and dandy, but let me tell you a little secret: no amount of tweets to Jim Irsay is going to get your money back.

With that being said, nobody is — nor should they feel — entitled to tell Andrew Luck what is best for him. Not me, not you, not season ticket holders, and not any local or national sports reporter.

While high-profile retirements are more common than they used to be, Luck’s retirement is peculiar. It rivals Barry Sanders and Calvin Johnson as one of the more shocking in NFL history.

Luck played in the NFL for six seasons. Since he was drafted first overall in the 2012 NFL Draft, his career has been laced with injuries that aren’t typically found in football. In September 2015, he suffered his first major setback: a shoulder strain that would lead to other issues.

In November 2015, Luck partially tore an abdominal muscle and lacerated a kidney. He wouldn’t play another snap in the NFL that season, and it was also reported he had torn cartilage in his ribs as a result of that November injury.

In 2016, he had a concussion that kept him out for one game and played through shoulder problems the entire season. He had surgery in January 2017, and setbacks following the surgery ultimately placed him on the IR for the entire 2017 season.

Luck battled all the way back and didn’t miss a game in the 2018 season. He won the NFL Comeback Player of the Year award, throwing for 4,593 yards and 39 touchdowns en route to a 10-6 season for the Colts.

The most recent mysterious injury for Luck was a lower leg injury that was eventually diagnosed as a calf strain.

All this to say: injuries took a toll on Luck. His shoulder injury left him in dark places, as he’s said on many different occasions.

“I was a sad, miserable human,” Luck recalled prior to the beginning of the 2018 season. “I was not nice to myself, nor was I nice to anyone else. I was a miserable SOB to be around. I was nervous. I was scared.”

Luck’s shoulder injury forced a fundamental change in how he approached the game of football and how he approached injuries. While addressing the media after news of his retirement broke, Luck reiterated his promise to himself that he would walk away from the game the second it didn’t allow him to live life the way he wanted to.

All indications suggest his most recent calf injury brought those emotions back to the front of his mind. He wasn’t going to do it again and the result was stepping away from the game.

“For me to move forward in my life the way that I want to, it doesn’t involve football,” Luck said after the Colts’ preseason game against the Bears on Aug. 24.

“A week and a half, two weeks…The lack of progress on my ankle. I’m in pain, I’m still in pain.”

-Andrew Luck on his decision to retire from the NFL. pic.twitter.com/xuN7FGE7Jv

That right there is the essence of why Luck retired. He wanted to live life on his terms, and did not feel like he could do that and play football.

For whatever reason, people feel like football players, or any professional athlete for that matter, owe them something. It’s absolutely baffling that anybody feels entitled to tell athletes how to live their lives and what decisions they should make.

Nobody questions anybody outside of the public eye when they choose to retire, make a career change or switch jobs. For the most part, it’s just understood that we, as “normal people,” make those decisions because it’s what’s best for us and the people around us.

Why does that change when we are talking about professional athletes?

Stop thinking of Andrew Luck as a quarterback who’s going to lead your team to a Super Bowl or your fantasy football team to that $50 prize you’ve been chasing for a decade. First and foremost he is a person, and it’s his prerogative to make his own decisions just like everyone else.

Let’s be real: if Luck was old and the Colts had just drafted a young stud as quarterback then the same people who are outraged by Luck’s decision would be jumping for joy. Or if he had been bad last year rather than leading the Colts to the divisional round of the playoffs, no questions would have been asked.

But instead, it’s as though Luck still owes Colts fans something. He doesn’t, in case you were curious.

It doesn’t matter what reason anyone has come up with for why Luck is in the wrong here. So what if he signed a contract extension in June 2016. It’s clear that he didn’t seriously consider retiring until this summer, and, more specifically, the last several weeks.

He literally peed blood for the Colts and still came back, not voluntarily, but as a result of his lacerated kidney. He spent the better part of two years dealing with a shoulder injury that clearly destroyed his mental state, and he still worked to come back and do it all over again.

It’s quite simple, really. Everyone is entitled to make decisions in their best interest. Yes, that includes Andrew Luck, a man who made a decision to walk away from football so he could live a life that makes him happy.

Could the timing have been better? Yes. In a perfect world he would have retired in March or April. The events over the past few weeks created a perfect storm that led to his retirement.

And for crying out loud, Indianapolis, stop booing the man who is responsible for every ounce of success that the Colts franchise has seen over the last seven years.