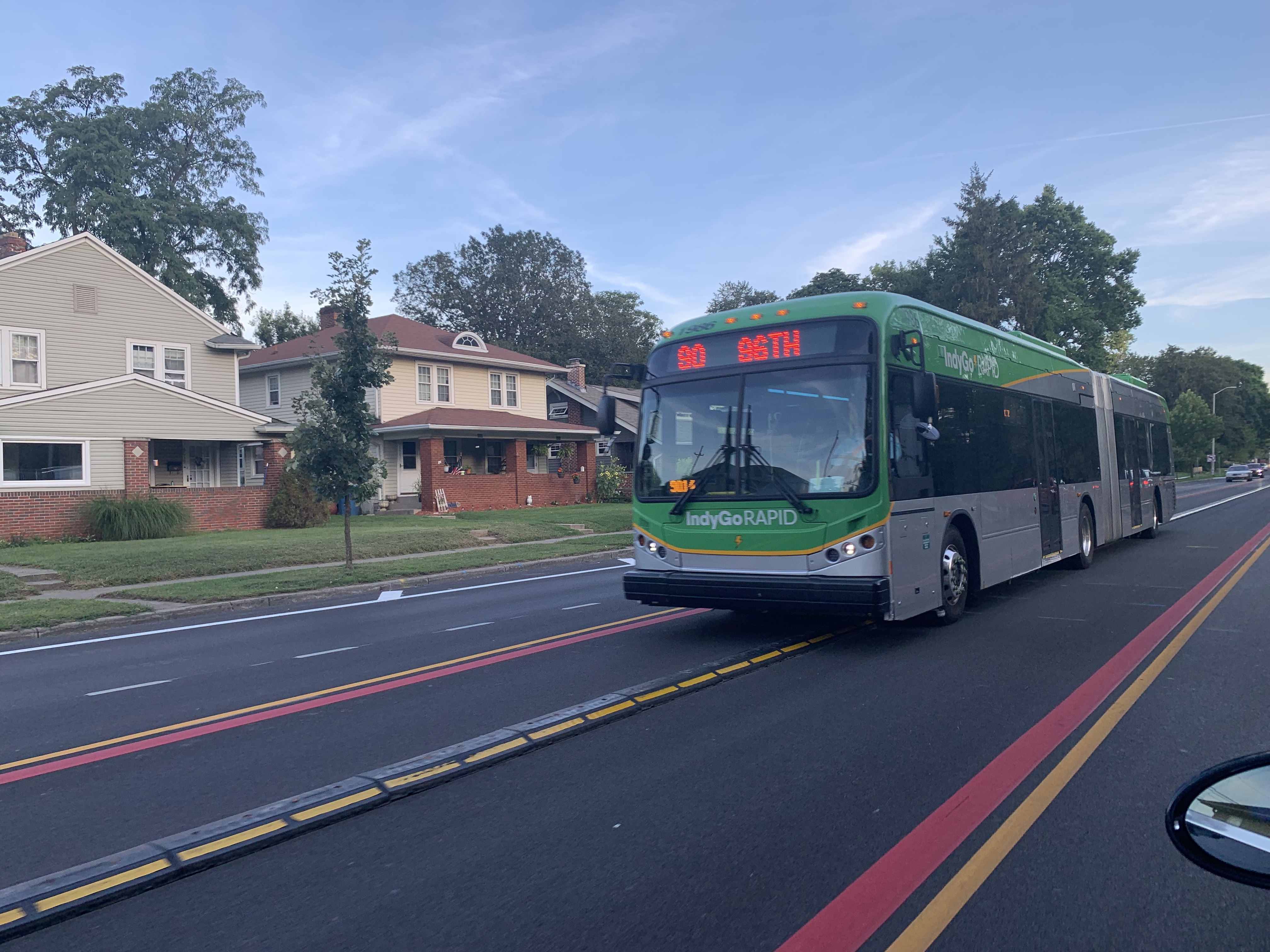 An IndyGo bus drives a practice route for the new Red Line. Photo by Meghan Stratton.

Indianapolis’ Red Line bus route, the city’s newest form of public transportation, will open Sept. 1. Free to ride for the entire month of September, the bus route covers 13 miles through the city. It connects Broad Ripple, a hotspot for Butler students, to University of Indianapolis, the southern part of the city.

The route harbors 28 stations spaced between a third of a mile and a half a mile apart. The route will be open 20 hours a day, seven days a week, and stops at stations in intervals of 10, 15 and 20 minutes.

The route is the nation’s first battery-electric bus rapid transit system and has been under construction since 2018. It is designed to mimic the light rail system and is intended to benefit local businesses surrounding the line.

The cost of one ride on the Red Line rings in at $1.75, but there are a number of different pass types available, ranging from one day to one month, amongst others. There is a College S-Pass available for $30, which lasts 31 consecutive days.

According to the Red Line page on the IndyGo, Indianapolis’ public transportation organization, the route will pass within a quarter mile of almost 50,000 jobs and over 5,000 Indianapolis residents across the city and its neighborhoods.

Lauren Day, the director of public relations for IndyGo, highlighted the anticipated role the Red Line would play in stimulating local businesses.

“We heard anecdotally, even early on, from business owners along the route who immediately understood the impact this would be for their employees,” Day said. “There were and are business owners who saw that benefit and understood that by having the Red Line, it would eliminate that barrier and that concern of how their employees would get to and from work a little bit.”

The Indianapolis Metropolitan Planning Organization did a baseline study of the space the Red Line is now occupying to examine what the past impact of public transportation in these areas has been and how it can be improved upon. Day is hopeful that the new route will be of more benefit for the community in the present and the long-term.

Kyle Giebel, a senior entrepreneurship and innovation major, has visited Broad Ripple in the past and is cautiously optimistic about the project.

“I’m fortunate enough to have a car, where I have not had the chance to worry about getting around the city, but I think I would take [the Red Line] for convenience factor of exploring the city a little bit more,” Giebel said.

Maddy Watterson, a senior history and political science double major, is interested in the project, even though she is not sure it will directly impact Butler students.

“I’m a big user of Uber and since there isn’t a stop within walking distance of my house, I don’t really see myself using it that much,” Watterson said. “Though, I am interested to see how it will impact people who already rely on public transportation…I am interested to see what the community impact will be.”

Despite the fact that she does not anticipate using it often, Watterson was still excited about the prospect and will try it a few times to see what it is like.

Michael Kaltenmark, Butler’s director of external relations, has been supportive of the project since the start, and he is hopeful — though also unsure — about the impact the Red Line will have on Butler students.

“My hope is Indianapolis’ public transportation infrastructure becomes more robust and as a result of that it just makes our campus that much more accessible,” Kaltenmark said. “I don’t know how much students use or rely on IndyGo service.”

Beyond just the students, however, he believes there is a lot of potential, and a need, for a more high-functioning system of public transportation in Indianapolis both for campus life and beyond.

“Certainly we have members of our employee base that rely on it, and then also guests or visitors to the institution use it, so to have that access, I think, is vital,” Kaltenmark said. “We’re constantly thinking about how to make a Butler education both more affordable and accessible, and certainly getting to campus plays into that.”

In honor of the route officially opening, IndyGo is hosting a number of different community events during the first week of September, such as 20 local music acts playing original music at various stations.

There is also a kickoff event on Sept. 3 on the Statehouse East Lawn, which will include food and drinks from Tinker Coffee, Great American Donut Company and Circle Kombucha, and speeches from community advocates of the project.

Construction for the next two lines of public transportation in Indianapolis, the Purple Line and the Blue line, is scheduled for 2023 and 2025, respectively.