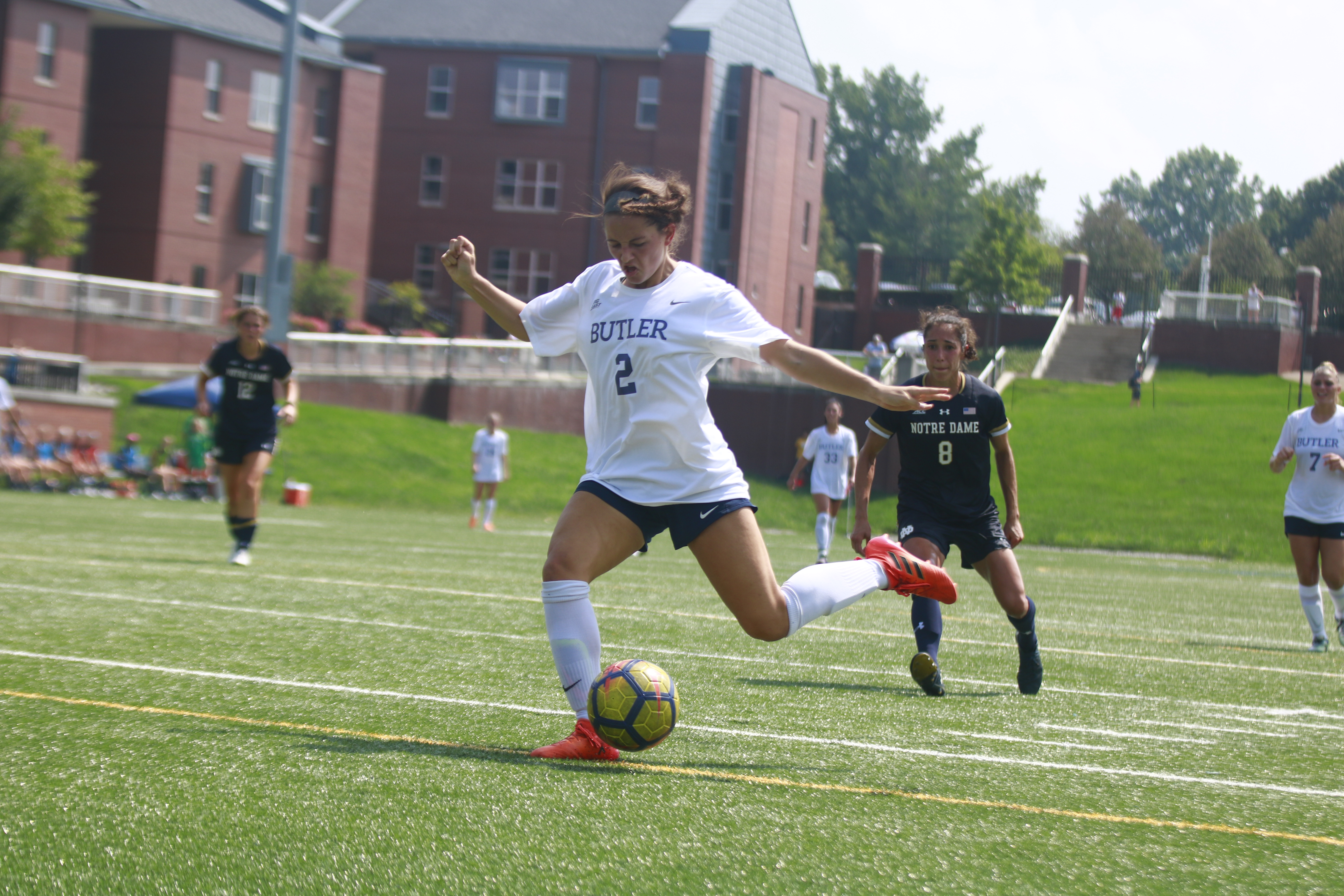 Katie Soderstrom takes a shot during a game last season. The Butler women’s soccer team is 2-0 to start the season. Collegian file photo.

The Butler women’s soccer team preserved its undefeated record with a 4-1 home win over IUPUI on Aug. 25. The win gave the Bulldogs their second consecutive 2-0 start to the season and moved their home unbeaten streak to 24 games. Here’s what we learned.

A year ago, Butler benefitted as their freshman class hit the ground running. Anja Savich was named Big East conference Freshman of the year while Katie Soderstrom, Morgan Kloosterman and Celia Gaynor were all big contributors. Each member of that group is now in the starting lineup and has accounted for five of the team’s seven goals in 2019.

Soderstrom netted two goals and added a pair of assists in the win over the Jaguars and Savich scored twice in their opener against Morehead State. Gaynor has a goal and an assist through two matches. If Butler is going to be successful this year, it will probably do so on the backs of that same group, and they are showing no signs of slowing down so far.

Stephanie Rodriguez was thrust into the starting goalkeeper slot this offseason but it doesn’t seem like she’s letting Butler’s defensive reputation slip away. After allowing a single goal in five matches during the spring season, she has been stout so far this year. A garbage-time goal against the Jaguars is all she has allowed this year.

Over the last few years, Butler has always been one of the most defensively stout teams in the Big East conference. They posted a team goals against average of 0.99 last season. Rodriguez’s is 0.50 through two matches. It’s early, but Rodriguez seems to have hit the ground running as Butler’s starting goalkeeper.

In some ways, everything in the two sections above can be taken with a minor grain of salt. Morehead State and IUPUI went a combined 11-24-3 last year and were 272nd and 275th in the NCAA women’s soccer and RPI rankings. Butler thoroughly dominated every aspect of its two matches. The Bulldogs are outscoring opponents 7-1. They are outshooting opponents 38-9.

If you’re Butler, it’s a good start to the year, but the strength of schedule starts to kick up from here. Next week, they travel to Northern Kentucky, who gave Butler a good game last year, and No. 16 Wisconsin. They follow that up with Michigan State and then Milwaukee and Illinois, two NCAA tournament teams from a year ago. So essentially, we’ll see if Butler is worth their salt over the next couple of weeks.