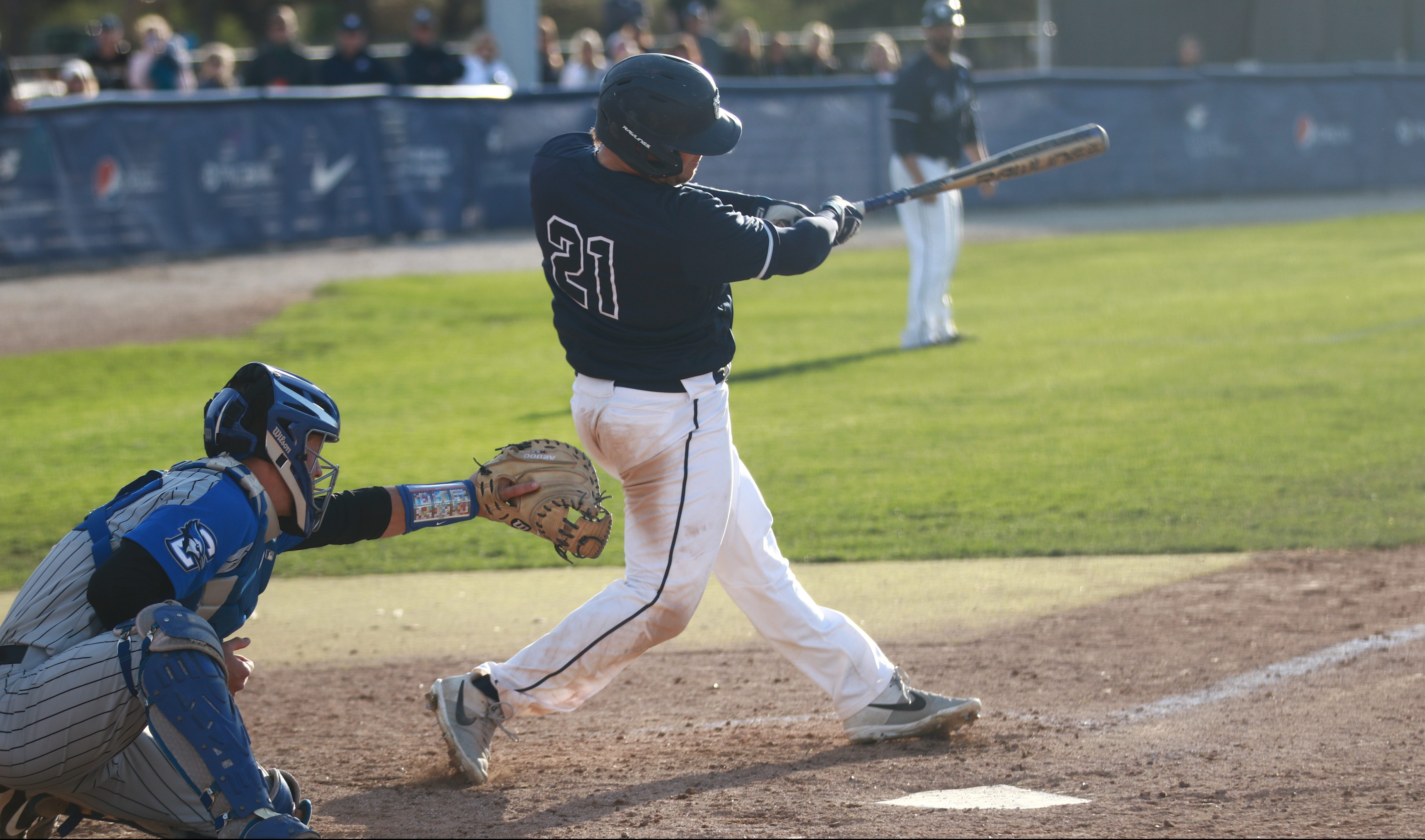 Harrison Freed at the plate this season. Freed and the Butler baseball team will face Northern Kentucky on April 23 in their first game of the week. Jimmy Lafakis/Collegian file photo.

Following an 0-2 series at Xavier, the Butler baseball team will return home for two nonconference games, starting with a Tuesday contest against Northern Kentucky. The Norse are coming off a 2-1 series against Youngstown State last week. The team is now 10-28 overall and 8-10 in Horizon League play. The Bulldogs defeated the Norse 9-2 in Kentucky back on March 26. Harrison Freed had two RBI in that game, while Joe Graziano threw five innings of one-run ball. First pitch from Bulldog Park is slated for 4 p.m., and the game will be broadcast on the Butler Athletics Facebook page.

After dropping its first two games of a weekend series against Creighton, the Butler softball team responded this past Saturday with an 8-0 win over the Bluejays. Now at 15-27 on the season, the Bulldogs will travel to Muncie, Indiana, for a Tuesday nonconference contest against Ball State. Coming off a 1-1 series against Toledo, the Cardinals are an impressive 30-16 on the season, including 8-6 in MAC play. Butler last played Ball State last April, winning 9-3 at home. First pitch from Muncie is slated for 5 p.m.

In its second nonconference game of the week, the baseball team will host Indiana University Kokomo on Wednesday. The Cougars are an impressive 30-15 on the season, and coming off a 1-2 series against Rio Grande over this past weekend. Last season, Butler defeated IU Kokomo 9-7 in extra innings thanks to a 10th-inning throwing error. First pitch from Bulldog Park is scheduled for 4 p.m. and the game will be broadcast on the Butler Athletics Facebook page.

After its two nonconference games of the week, the baseball team will resume Big East play when it travels east to face Seton Hall in a three-game series. After being swept by Creighton this past weekend, the Pirates enter the week with a 16-20 overall record, including a 2-4 mark in conference play. The Bulldogs faced Seton Hall a total of five times last season, going just 1-4. Friday’s game is slated for 2 p.m. and will be streamed on the Big East Digital Network.

With just two competitions remaining prior to the Big East Outdoor Championships, the Butler men’s and women’s track teams will travel to Louisville, Kentucky, to participate in the Lenny Lyles/Clark Wood Invitational over the weekend. At last year’s event, Allie Vogeler topped her own Butler record in the 400-meter run, while Wade Walder led the men with a personal best time in the 110-meter hurdles. Action begins on Friday and lasts through Saturday.

Coming off a ninth-place finish at the Wright State Invitational in mid-April, the Butler men’s golf team will travel to Callawassie Island, South Carolina, to compete in the Big East Championships. Last season, the Bulldogs finished fifth out of nine teams at the championships, improving upon their sixth-place finish a year prior. Play is scheduled to get underway on Friday and last through Sunday.

The men’s and women’s track teams will wrap up competition at the Lenny Lyles/Clark Wood Invitational in Louisville, Kentucky on Saturday.

The men’s golf team will continue play at the Big East Championships in Callawassie Island, South Carolina, on Saturday.

The Butler lacrosse team will look to snap an eight-game losing streak when it travels to Norfolk, Virginia, to take on Old Dominion in its final game of the regular season. The Monarchs are coming off an 18-4 loss to No. 24 Georgetown over the weekend and now hold a 3-13 record on the season. Though Old Dominion is in the Big East, this will mark the first time these two programs have ever faced each other. The game is slated to get underway at 11 a.m.

The softball team will travel east for another road series when it heads to Rhode Island to take on Providence over the weekend. Following a 1-2 series against Seton Hall, the Friars enter the week with a 6-8 mark in Big East play. Last year, the Bulldogs took two of three games from the Friars in Indianapolis. First pitch for the first game of Saturday’s doubleheader is slated for 12 p.m.

The baseball team will continue its three-game series at Seton Hall with a 1 p.m. contest at Jack Kaiser Stadium in Queens, New York.

The men’s golf team will wrap up play at the Big East Championships in Callawassie Island, South Carolina, on Sunday.

The baseball team will conclude its three-game series at Seton Hall with a 1 p.m. contest at Jack Kaiser Stadium in Queens, New York.

The softball team will wrap up its three-game series at Providence on Sunday with 12 p.m. contest.