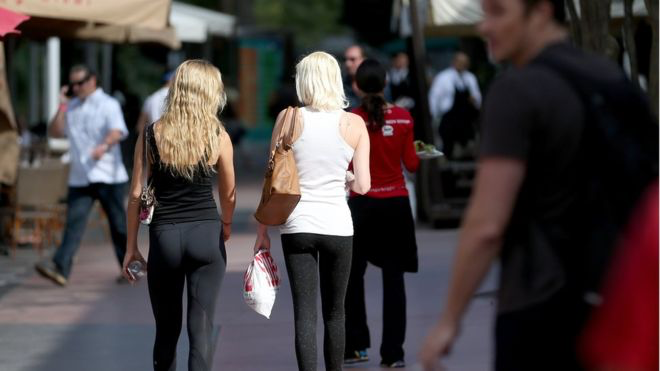 The years-long debate over leggings is still alive and well, inciting rage in some and prompting dialogue for others. But even though it sounds trivial — and it kind of is — the leggings debate is rooted in something deeper, something more persistent.

On March 25, The University of Notre Dame’s student-run newspaper, The Observer, published a letter to the editor titled “The legging problem.”

The author of the letter, a Notre Dame mother of four sons named Maryann White, proposed that leggings make it hard for Catholic mothers to teach their sons to respect women. While her sons are “nice guys” and “know better than to ogle a woman’s body,” she argues that leggings are a distraction to her sons nonetheless and that this is a “problem that only girls can solve.”

White asks young women to think of men next time they reach for a pair of leggings — to think of all the fathers, sons, and fellow male students out there that they may be inadvertently tempting. Instead of leggings she suggests that they should wear jeans, or at least cover their ever-so-distracting “nether regions.”

She also compares the fashion industry to Star Wars’ Jabba the Hutt forcing Princess Leia to wear a “slave girl outfit in which her body became the focus,” implying that popular media and fashion trends pressure women to voluntarily expose their bodies.

While this implication isn’t completely misled, it’s shortsighted to suggest that women always dress themselves according to other people — or that they feel forced to dress a certain way by the male-dominated media and fashion industries. Believe it or not, women don’t always get dressed with men in mind.

So, while I’d love to tear each one of Maryann White’s misogynistic points apart and mock her for being another annoying character in the never-ending story of sexist double standards, there’s no point.

Notre Dame students have responded through casual protest by wearing leggings to class. About 1,000 students RSVP-ed to a Facebook event celebrating Leggings Day, agreeing to wear leggings to class the day after the letter’s publication. A few people even responded to White’s letter by writing one of their own.

In a letter to the editor titled “Leggings: Another mom’s view,” Heather Piccone, a mother of a current Notre Dame student, responded to White.

“This is the issue — the real issue,” Piccone said. “We are raising the wrong mindset. My daughter is not responsible for this woman’s sons’ thoughts or behaviors.”

Piccone concludes her frustrated response with the implication that White’s letter misses the mark when it comes to gender relations. “Leggings are the least of this world’s current gender issues,” Piccone said.

A current Notre Dame senior, Shane Combs, also responded to White’s letter with a letter to the editor of his own, “Response to ‘the legging problem.’”

He comments on the expression of sexual identity in college — a place where young men and women are free to express their sexual selves, possibly for the first time. Because of this, he suggests that asking a young man to ignore women in leggings “would be like asking birds and bees to ignore the blossoming flowers of early spring.”

“Thus, just as women should not be shamed for their dress, we can’t posit every man is a misogynist for finding a female classmate attractive,” Combs said.

Lastly, another Notre Dame senior, Maria Pope, wrote a letter to the editor countering the student organized leggings protest and urging students to consider how effective their protest would really be.

“Organizing a day in which the entire campus wears leggings represents no attempt to understand but rather a quelching of intelligent disagreement,” Pope said.

Pope calls for open discussion and dialogue rather than the silencing of White’s words. “[The protest] threatens to replace discussion with controversy by throwing words at either side without the possibility of them being heard,” Pope said.

Since the publication of White’s letter, major newspapers have reached out to her but haven’t received any responses. White has successfully been silenced and dismissed for giving her opinion — one that most seem to be perceived as sexist and unwarranted.

But the intentions of White’s letter aren’t necessarily even bad. At first glance it may seem like she is just trying to prudishly shelter her sons from the reality of college, putting the responsibility on their female peers — and she is. At the root of her letter, though, is also the desire to protect women from men and society’s impossible standards.

“Women should be viewed first as people — and all people should be considered with respect,” White said.

Additionally, White attempts to explain some of the reasoning behind her letter, lamenting the omnipresent sexualization of women. Unfortunately, though, she relies on a stale tactic that is common of rape culture.

“A world in which women continue to be depicted as ‘babes’ by movies, video games, music videos, etc. makes it hard on Catholic mothers to teach their sons that women are someone’s daughters and sisters,” White said.

While her reference to women as daughters and sisters humanizes them in a way, it also removes their individuality. It attempts to remind men that women are in fact someone’s daughter or sister, but that shouldn’t matter. The decision to not harm a woman based off of how she is dressed shouldn’t be reliant on her relation to another person; she is someone regardless. Whether or not they have a family, no one deserves to be ogled, dehumanized, assaulted, or raped.

Nonetheless, this part of White’s letter truly is rooted in the desire to protect other women from the dangers often associated with sexualized women or “babes” as she refers to them.

The real issue with White’s letter has nothing to do with leggings. The issue is that she’s victimizing women while simultaneously blaming them for being victims. White’s philosophy is the same one that condemns scantily-clad drunk girls for getting raped by their fully coherent male peers.

It puts all the responsibility and blame on women, which suggests and assumes that men cannot and are not expected to have any responsibility over their thoughts or actions toward women.

People aren’t really angry about the letter and the issue isn’t really about leggings.

It wasn’t about leggings when more than 40 girls were removed from class at my high school in 2015 because they were distracting their male peers from their education, and it’s not about leggings now.

It’s about women tearing down other women. It’s about the policing of women’s bodies, whether they’re being told to wear more or to wear less. It’s about our society’s discomfort with sex and bodies — things that are natural. And it’s about how we value the education of men over that of women. It’s about systemic patterns that are so deeply-rooted in our society that White, a woman herself, is trying to address them by asking young women to hide their butts and legs.