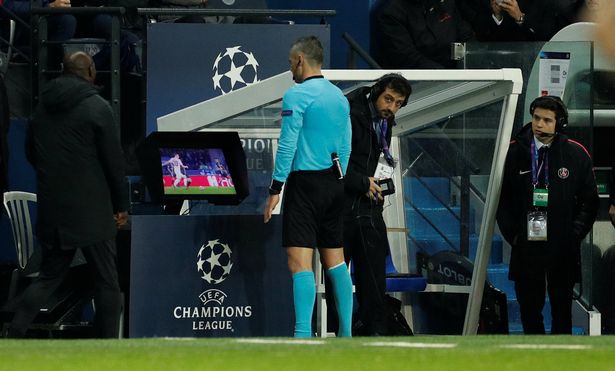 A video review during the second leg of the Champions League Round of 16 matchup between PSG and Manchester United. Photo courtesy of Reuters.

Alan Smith, the color commentator for TNT, thought there was no way the call would be reversed. There was no way the deflection off Paris Saint-Germain defender Presnel Kimpembe’s arm met the definition of a hand ball. Especially not in the 91st minute with a spot in the Champions League quarterfinals on the line.

Smith watched replay after replay of Kimpembe jumping and turning his body to block Diogo Dalot’s shot from outside the box, the ball ricocheting off Kimpembe’s arm in the process.

“I’d be amazed if they gave that,” Smith said.

Then referee Damir Skomina did it. After going to the monitor, he awarded the penalty. Smith couldn’t believe what he was watching.

“I am amazed at that. I really am.” That’s all he could muster.

Welcome to the world of soccer with video assistant referees, better known as VAR. Over the past few years, leagues across the world have slowly been implementing video review. Four types of calls are reviewable: red cards, penalties, mistaken identity and offsides.

It started in Germany with the Bundesliga. Major League Soccer in the United States soon followed suit. This is the first time the technology used in the Champions League, the world’s premier soccer competition for non-international teams.

In the 2019-20 season, VAR is coming to the world’s most famous league: England’s Premier League, home to the likes of the previously mentioned United, Manchester City, Chelsea and Liverpool among others.

The problem with VAR is not that it exists. If the technology is there to prevent blatant errors, it needs to be utilized. The issue is the way VAR is being used.

Unlike sports such as baseball and basketball, where instant replay is used to make fairly objective decisions — who the ball went off of, whether it was fair or foul — the most important calls in soccer are almost always subjective.

What results are situations where nobody can decide what the “right” call is. Take the case of Kimpembe’s handball. While Smith was absolutely convinced the call was wrong, other analysts thought Skomina’s call was spot on. It’s impossible to have any kind of consistency when every referee and analyst interprets the rules differently.

UEFA, the governing body of the Champions League, sent out an official explanation of why the decision was correct. That explanation was based off of subjective phrases like “impact could therefore not be unexpected” and “made the defender’s body bigger”.

The heart of the problem is this: VAR is trying to get calls “right” when most of the time, no such thing exists. Here’s the solution: stop being so generous with its use.

VAR is supposed to be used to fix “clear and obvious errors”. There was nothing remotely “clear” or “obvious” about the Kimpembe decision, yet the referee felt the need to intervene.

To restore order to the soccer universe, all that’s needed is a 30-second timer. Limit every review to 30 seconds. If something is truly clear and obvious, that is plenty of time to figure out. In most cases, anyone who understands the sport can recognize blatant mistakes in one or two replays.

If a professional referee can’t be confident the call on the field was incorrect after 30 seconds, the initial decision should stand. Part of being an athlete — and particularly a soccer player — is accepting that officials are human.

When teams step onto the field, they enter an unspoken agreement with the referee. The ref will do his or her best to be fair and players will accept the ref’s interpretation of the rules.

Video review should be helping referees, not making their job harder. The goal is to allow honest mistakes to be corrected, not officiate a game perfectly.

After the smooth debut in the World Cup last summer, it looked like VAR was in the process of seamlessly integrating itself into the sport. The fact that the Manchester United/Paris Saint-Germain drama was only one of thee Champions League matchups in the Round of 16 featuring VAR controversy suggests otherwise.

Time is not going to make this any better. It is a fundamental flaw in the way the technology is used. The call that eliminated PSG from the Champions League is just one of countless examples that leave fans, analysts, coaches and players alike scratching their heads.

As review systems across sports get more advanced and intelligent, the questions at the heart of the VAR debate are only going to become more complex. Trying to get every single call “right” takes away the fun of sports. It’s also just not possible.

For the sake of soccer, let’s make sure “clear and obvious” actually means clear and obvious. There will always be some disagreement, but there are also things every rational fan of the sport can agree on.

Just like kids don’t want their parents meddling in every little detail of their lives, soccer doesn’t need VAR inserting itself in every questionable call.