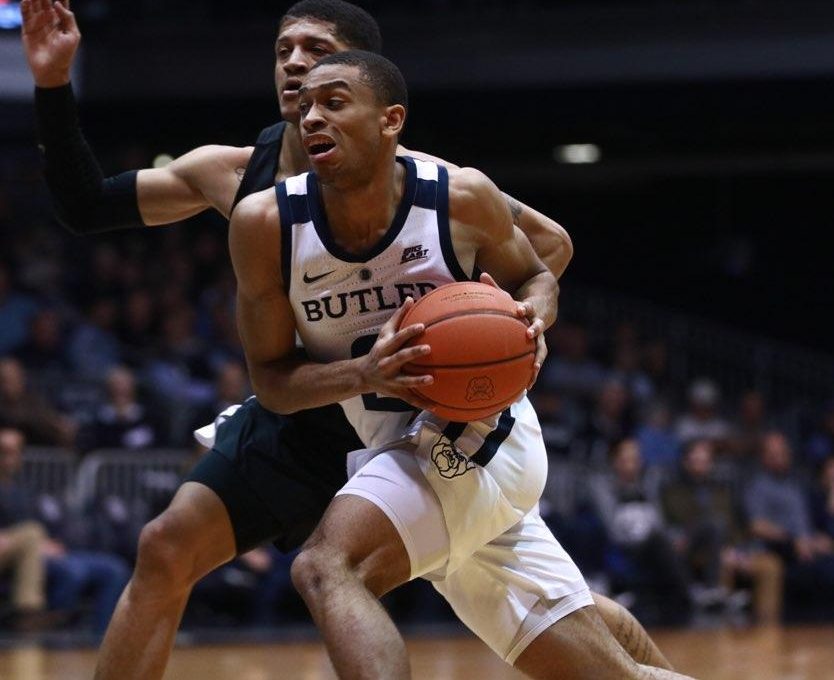 Aaron Thompson drives to the basket. Thompson and the Bulldogs finish out the regular season at Providence on March 9. Jimmy Lafakis/Collegian file photo.

After a 71-66 win on senior night against Xavier, the Butler men’s basketball team finishes the regular season on the road at Providence. Here’s what you need to know as the Bulldogs go after their 17th win of the season.

Interior defense and the bench has to be better this time around.

In the first meeting between these two teams, Providence’s Nate Watson had his way on the interior, scoring 21 points on 8-of-10 shooting. He outscored Nate Fowler and Joey Brunk by four points by himself and the Friars scored eight more points in the paint than the Bulldogs. Interior defense and rebounding will be key contributors to a Butler victory.

The big story in the Feb. 26 matchup at Hinkle Fieldhouse was bench production. The Providence bench outscored Butler’s reserves 26-13. The Bulldog bench was outscored in that contest for the first time since Jan. 9 and was one of the main reasons that Butler lost the first matchup despite 42 points combined from Kamar Baldwin and Jordan Tucker. Butler’s bench must be better and is often a major advantage the Bulldogs possess.

Force turnovers and get out in transition.

In Butler’s win over Xavier, the Bulldogs forced 15 turnovers and had 11 steals that resulted in 14 fast break points. It is no secret that Butler struggles in the half-court offensively. When this team is at their best, they are forcing turnovers and getting out in transition. Baldwin and Aaron Thompson are great in the open floor and open looks become a lot easier to find when the defense is scrambling to get back and defend. Fast break points are momentum swingers and can take the crowd out of a game, which can be crucial when playing on the road. If Butler can force turnovers the way it did against Xavier, the Bulldogs will have a much better chance of ending their season with a road win.

This weekend could change a lot and this game is important.

It is unlikely that the Bulldogs get an at-large bid to the NCAA Tournament, but this game against the Friars could have major Big East Tournament implications. The only guarantee is that Marquette and Villanova will make up the No. 1 and No. 2 seeds in the conference tournament. Everything else is up for grabs.

Take a look at the best and worst case situations for your team and tune to Big East Shootaround tomorrow at 11 AM ET to start your Wild Card Saturday! pic.twitter.com/3NE8umFglj

The Bulldogs could finish the regular season as high as fourth in the Big East if the cards fall correctly or finish in dead last if they lose. The road to the Big Dance will probably come through a conference tournament title and getting out of the bottom four in the conference means Butler will have to win one less game. Not to mention a better seed presents the opportunity for a better matchup in the quarterfinals. Butler might not be able to change their position on the bubble in any major way with a win against Providence, but it is still an important game for the Bulldogs.