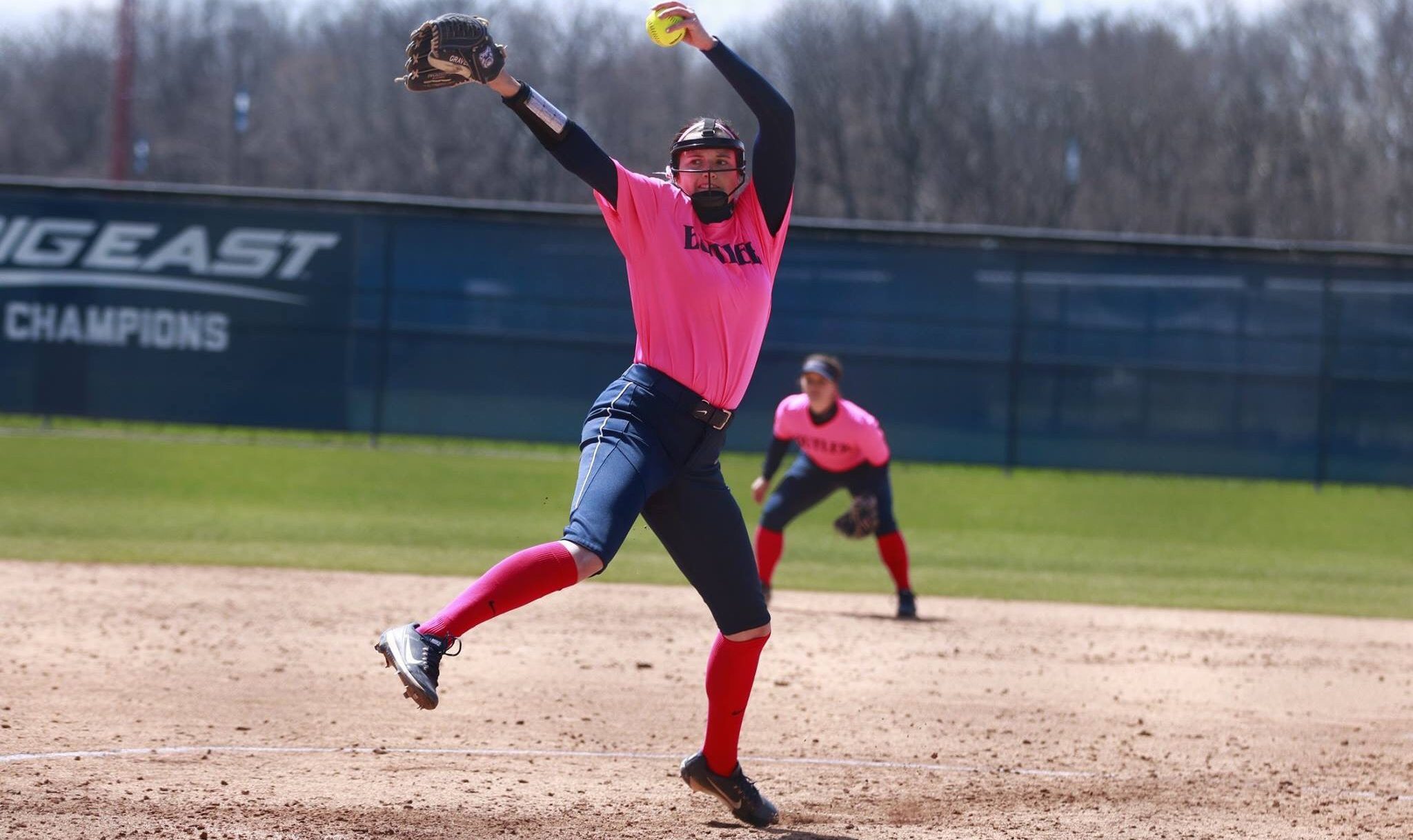 She’s easy-going, laid back, chill. However you want to say it, it’s all just a game for her. But it’s a game she loves — and a game she’s good at. Lucky for Butler softball.

Opposing batters, go ahead, try and guess the pitch. That’s all you can do when facing sophomore pitcher Alyssa Graves — guess. Step into the batter’s box against her, and you better be on your toes.

“It’s hard for hitters to get comfortable in the box against her,” head coach Scott Hall said. “Especially when she throws it for a strike.”

The key? Well, she won’t give too much away, but just watch and you’ll see lots of movement and change of speeds — not a good combination for opposing batters. Her change-up is her go-to pitch.

“She definitely has a confidence and a really big appearance on the mound,” senior catcher Sammy Andersen said. “She just hammers her spots and gets girls out.”

Some pitchers may want an extensive scouting report on each opponent to prepare for every game. Not Graves. She’s confident enough to focus on herself — and it works.

“I’m kind of the opposite from a lot of pitchers because I like to think that I don’t need to know anything about them,” Graves said. “I’m just gonna go out there and do what I do best and show off my strengths.”

Graves opened the 2019 season with a 5.1-inning shutout performance of IUPUI, where she allowed five hits and struck out four batters. The Bulldogs routed the Jaguars 8-0 in six innings.

She was named to the Big East conference weekly honor roll after an opening weekend where she only surrendered four runs in 12 innings. Since then, she’s had three performances of seven or more strikeouts.

Through the first three weekends of play, Graves led the Big East in strikeouts with 37 in 34 innings. The Bulldogs had the most recent weekend off, and Graves was bumped down to third by two pitchers who were in action last weekend. Graves is also third in the Big East with 10 strikeouts looking.

“[Her pitching] makes me want to work even harder,” senior outfielder Jenna Foreman said. “When she’s throwing well, I really want to help give her insurance runs to hopefully continue to boost her confidence and keep her on top of that game.”

She first realized she had the potential to play college softball when she was playing in 10U softball for East Peoria Express. She looked up to the older players in her softball community that were garnering attention from college coaches. She wanted that, too.

“They just seemed like role models, they were kind and smart and really good at the sport.” Graves said. “It made me want to be like them.”

When she was playing for New Lenox Lightning 18U gold travel team at 15 years old, Hall first saw that same movement and change of speeds out of Graves at a tournament in Westfield, Indiana. He wanted her in a Bulldog uniform.

“That always peaks any coaches interest, especially out of a lefty,” Hall said “There’s not a whole lot of lefty pitchers out there who can do what she does.”

From there, Graves dominated Illinois high school softball and led East Peoria Community High School to a state finals appearance her senior season. She went 29-2 in 32 appearances with a 0.72 ERA and 325 strikeouts for the Raiders that year.

Do the math, and that’s an average of over 10 strikeouts a game her senior season.

Graves made a smooth transition from Illinois high school softball, where she was an All-State selection and MaxPreps Medium School All-American, to lead the Bulldogs in earned run average last year. Her ERA of 2.69 was good for fourth in the Big East Conference as a freshman.

Remember the part about Graves being laid back? She once brought her guitar to a Bulldogs’ practice and performed songs by Vance Joy and The Lumineers in the dugout for her teammates.

“Honestly, I’ve always kind of been someone that tries to make others laugh and feel comfortable with the me,” Graves said.

She jokes with Foreman that the two are the fastest players on the team and are “slapping twins” because they are “basically the same hitter.” Graves doesn’t hit.

“She has a very goofy personality,” Andersen said. “She loves to mess around and joke around off the field or when we’re not playing.”

Graves can be goofy, but she can also be focused and mature.

“She’s very real with herself,” Hall said. “You don’t have to talk in circles to her. You can be direct and she’s direct right back. She’s very direct about how she’s feeling and how she’s throwing, so that’s a very big sign of maturity.”

Graves has barely gotten her feet wet in the college game, and after a freshman season that saw the team post a 20-28 record, she expects better. She expects a Big East crown.

“I want a ring on my finger. It’s as simple as that,” Graves said.

Nothing scarier than a young, hungry and talented pitcher. Watch out Big East.

“She can be one of the dominant pitchers in our league and in Division I,” Hall said. “She has that potential. It’s just going out and doing it.”