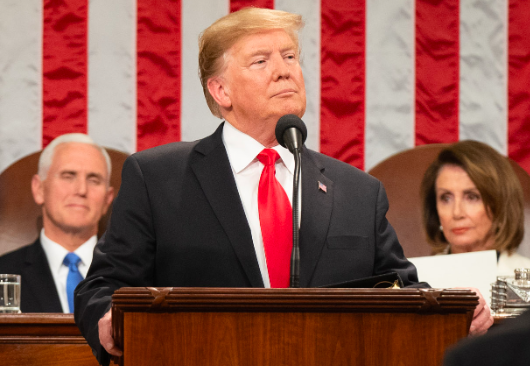 President Donald Trump at the State of the Union address Feb. 5. Photo courtesy of The White House.

President Trump’s most recent State of the Union address resonated with me as a victory for a variety of reasons, including his focus on the country’s economic success, women’s growing equality in representation, and the recent successes of bipartisan legislation passing through Congress.

In 2018, our country’s GDP grew between 2 to 3 percent and the unemployment rate sat at a measly 3.7 percent. The United States’ economy is working incredibly efficiently with industries like resurgent steel, manufacturing and oil industries fueling the growth of the economy. The number of jobs created has increased consistently since Trump’s inauguration.

Although job availability has been growing since 2015, Trump’s move to eliminate governmental restrictions, including replacing the North American Free Trade Agreement, has caused former pilot industries in the U.S to return and create jobs here in America.

“We have created 5.3 million new jobs and, importantly, added 600,000 new manufacturing jobs — something which almost everyone said was impossible to do,” Trump said.

In America, the gender equality gap has been shrinking with every passing year in regards to representation in government. The 116th Congress of the United States includes a record 127 women representatives. 25 of those are U.S. senators, making up a quarter of the entire voting body.

Women being elected to Congress is an important step towards equal representation between men and women. President Trump highlighted this during his speech.

“And exactly one century after Congress passed the constitutional amendment giving women the right to vote, we also have more women serving in Congress than at any time before,” Trump said.

I believe that it is high time that women are accurately represented within Congress. It is an extremely important step towards our country having a more accurate representative government, and President Trump made sure to acknowledge congressional women in his speech.

The President acknowledged that bipartisanship has helped the government address these problems, and further encouraged more action with new bills surrounding infrastructure funding, lowering the cost of drugs and amending Obamacare while protecting patients with pre-existing conditions.

“The next major priority for me, and for all of us, should be to lower the cost of healthcare and prescription drugs, and to protect patients with preexisting conditions,” Trump said.

Overall, President Trump focused on reaching out to both sides of the aisle through his State of the Union Speech and had great success in doing so.