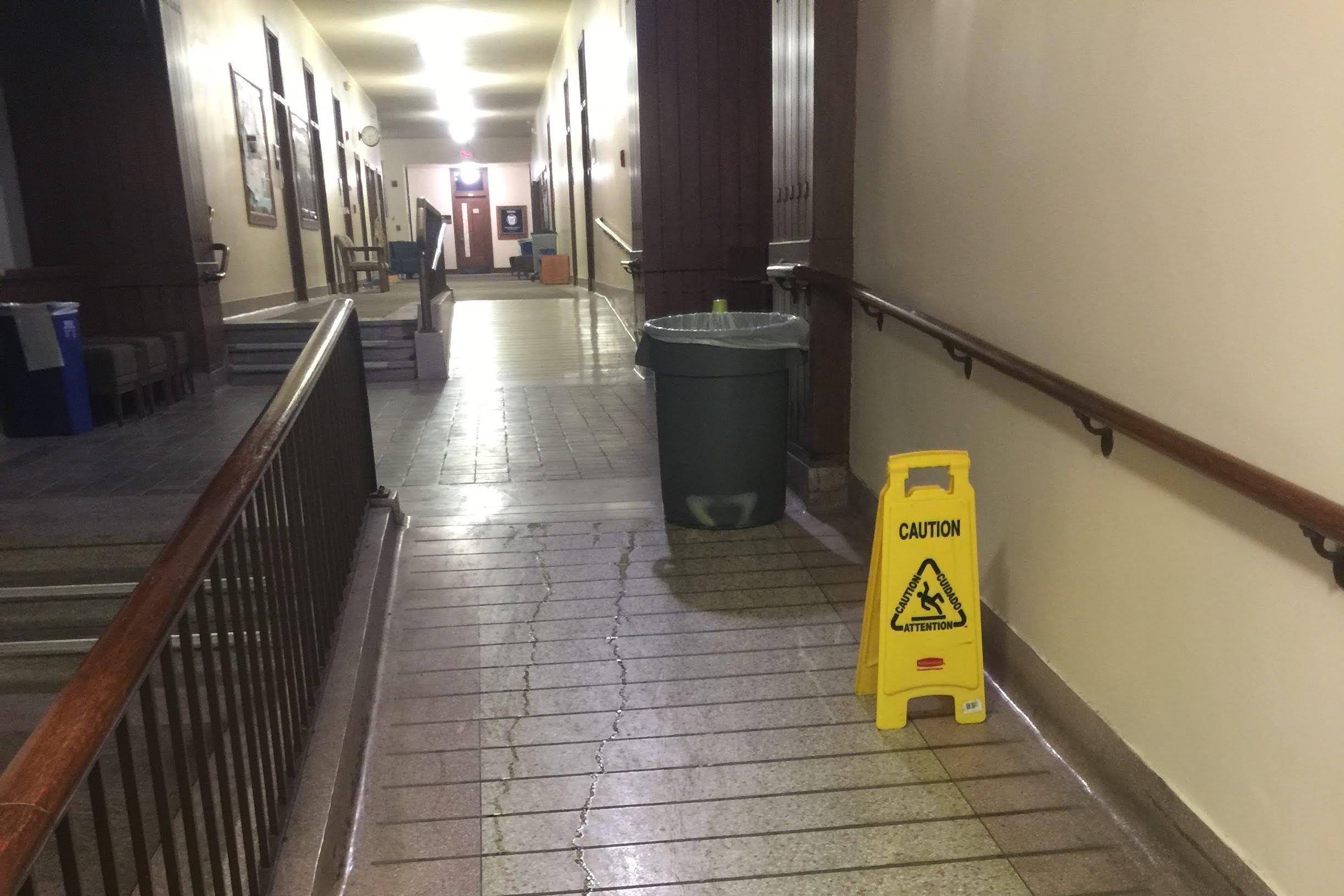 Water leaks onto the floor of Jordan Hall. Photo by Kelly Schwantes.

Following the drastic fluctuation in weather conditions over the past two weeks that led to the Jordan Hall basement flood, several other buildings on campus have also experienced maintenance issues, including Gallahue, Fairbanks and Starbucks.

The Communication Sciences and Disorders audiology clinic in the basement of Jordan took the brunt of the damages, impacting CSD students and ruining the floors and walls.

Donald Borden, project manager and maintenance system coordinator, confirmed in an email that both the CSD common area and classrooms 076 and 083 in the basement reopened on Monday. The office space should be able to reopen next Monday.

Borden said a timely response from operations prevented much of the water damage. A water loss contractor was also brought in and used 24 fans and six large dehumidifiers to help return the rooms back to normal.

Borden was unable to get a debrief on the water leaks that occured in Gallahue, Fairbanks and Starbucks, but said that the extreme weather conditions all impacted those breaks.

“With the heavy rains, the drains may simply be unable to handle the volume, and a leak can occur at one of the drain pipe connections,” Borden said.

He said the heavy snow combined with the rain that followed resulted meant the drains in several buildings were unable to properly contain all of the water buildup. The extremely low temperatures resulted in cracks in the pipes, thus releasing the large volume of water into the buildings.

Despite not being a CSD major or taking CSD classes, first-year health science major Grace Hall was also impacted by the flooding in Jordan. Hall’s First-Year Seminar, located in room 083 in the Jordan Hall basement, was forced to relocate due to the flooding.

“Our first day of classes [after the flooding] we just moved to a different room in Jordan so it wasn’t that much of a change,” Hall said. “The second day we tried to go back to the same room and then there was a scheduling conflict and it really just messed with our schedules and ended up messing with another classes schedule.”

Many students were forced to move to South Campus. However, Hall’s class managed to find another room in Jordan to use, saving a longer walk to class.

Rachel Lowery, senior CSD major, said she was impressed with Butler’s ability to get the water cleaned in a timely manner and that many people were working on the issue even during the weekend.

However, Lowery made note of a trash can sitting in the first floor at the bottom of a stairwell in Jordan collecting leaking water from the building.

“I’ve always found it frustrating that Butler can build two new dorms and a new business building in three or four years, but need to use buckets in Jordan whenever it rains because the ceilings leak,” Lowery said.

She said she isn’t sure how costly or difficult making repairs to the pipes or ceiling reinforcements in Jordan would be, but thinks having to re-carpet the basement every few years could be just as time-consuming and expensive.

“Where our classes are held is part of the quality of education and the conditions of Jordan are distracting, inconvenient and in some cases hindering students from their education,” Lowery said.